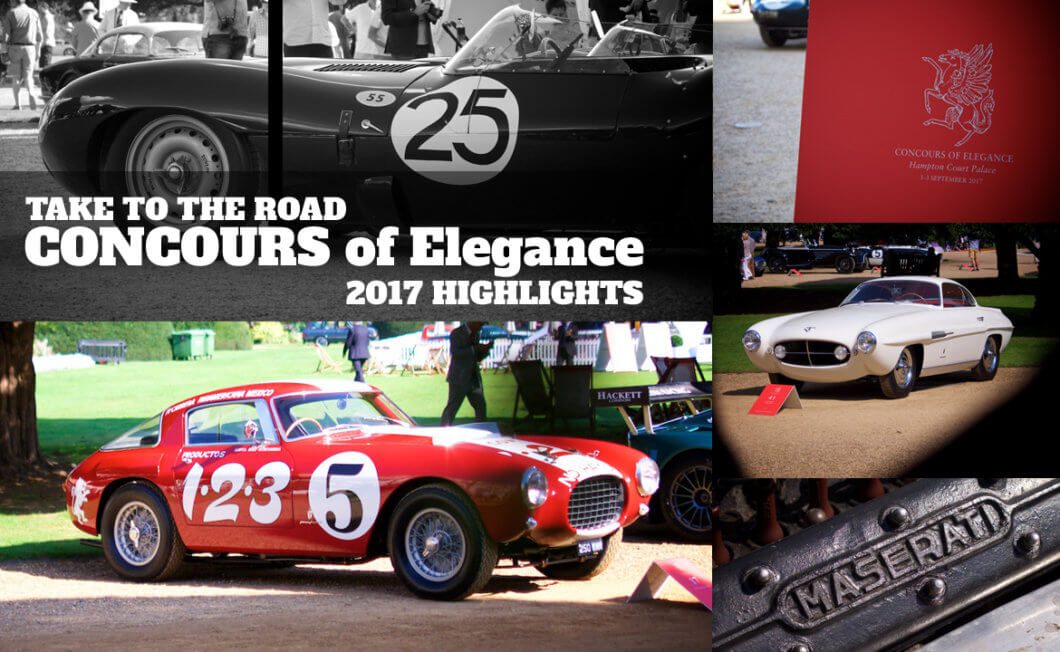 Take to the Road attended the 2017 Concours of Elegance at Hampton Court Palace. The exclusive concours event, set in the grounds of one of the UK’s most beautiful royal palaces, returned to west London. One display were some of the finest classic and vintage cars ever designed. And Take to the Road was fortunate enough to spend two days at this prestigious show.

There is always something special about a concours event. It is a wonderful celebration of some of the finest automobiles ever created. Bringing together so many rare and exclusive classics and displaying them in the beautiful grounds of Henry VIII’s former palace, adds to a real sense of occasion. And it also gives the public the chance to see up close, often for the very first time, cars that normal remain tucked away in private collections.

Take to the Road last attended the Concours of Elegance in 2014. The first time you attend a show of this caliber, it can seem a little overwhelming. And that is if you try and cram everything into one day. For starters that isn’t possible. To truly take in what is laid out before you in the wonderfully manicured grounds of Hampton Court, you really need two days minimum.

Not only were there close to 160 rare classics on display, there are also roughly the same number of specially invited club and owners cars on display. Hence it can appear a bit overwhelming… one doesn’t know where to look there are so many beautiful cars on show. The best advice is to simply take your time and just browse and take in the wonderful display of cars that have gathered from all over the world.

With a show like the Concours of Elegance, there are many many favourites. Sometimes it is hard to pick an outright winner. Which is a job best left for the concours judges. With so many exceptional cars, picking an out right winner is incredibly hard!

The one car that stood out however, essentially Take to the Road’s Star of the Show was the incredible Baillon Collection Maserati A6G 2000 Gran Sport. Once owed by serial car collector Roger Baillon (see our very early feature from 2015 about this amazing collection), the rare Maserati was sold at Salon Prive in 2015, at arguably one of the greatest and most famous auctions of all time. The car had spent decades in storage, along with a whole host of other rare vintage and classic cars.

Despite its rather worn and aged external appearance, the Maserati A6G actually drove into the show. It really was a sight to behold. Watching the car sell for €1,962,400 via Artcurial’s live video back in 2015, it was a real privilege to be able to see such an incredible car with an amazing back story. It was also good to see that the owner has resisted the temptation to restore the car. Instead he is preserving it as is, retaining the patina and history that took decades to accumulate.

Another firm favorite was the incredible looking 1953 Ferrari 250 MM owned by Nick Mason. Only 31 of the these 250 MMs were built and this particular car is one of the few survivors of the 1953 Carrera Panamericana.

As early Ferrari racers go, this 250 MM is a sight to behold, mixing beauty with raw speed. Something it performs even when standing still! A truly wonderful car.

One other car (amongst countless others) that caught our eye was the striking 1954 Fiat 8V Supersonic. The incredibly futurist car, influenced by the emerging jet age, was designed by Giovanni Savonuzzi at Ghia.

It featured Fiat’s complex and promising V 8 engine, a development which ultimately failed due to internal politics at the Turin based outfit.

Fiat planned to build 200 8V Supersonic’s but in the end only 114 were built. This particular 8V is chassis no 43 and is thought to be the New York Motor Show car. It is one of the most streamlined and striking Fiat’s of all time and a wonderful car to see in the flesh.

And one cannot mention the 2017 Concours without talking about the spectical that was the arrival of the Jaguar D-Types that competed in the legendary 1957 Le Mans. The cars that finish 1st, 2nd, 3rd, 4th, 5th and 7th were all recently reunited for the very first time and they had their debut at the Concours of Elegance.

The sight and sound of these iconic racers arriving at the Palace is something we’ll never forget. As you can imagine, their appearance caused quite a stir and their position at the front of the palace was striking. It was one of the those moments we’ll never forget!

So after two days a the 2017 Concours of Elegance, it is safe to say we thoroughly enjoyed the show. Everything from the weather to the cars and the surroundings was perfect. It was a real privilege to be able to study these wonderful cars in detail. Roll on the 2018 Concours of Elegance!

Additional Photos for the 2017 Concours of Elegance

See our Highlights of the Inaugural City Concours 2017 in London

Concours of Elegance to Celebrate Aston Martin and Zagato