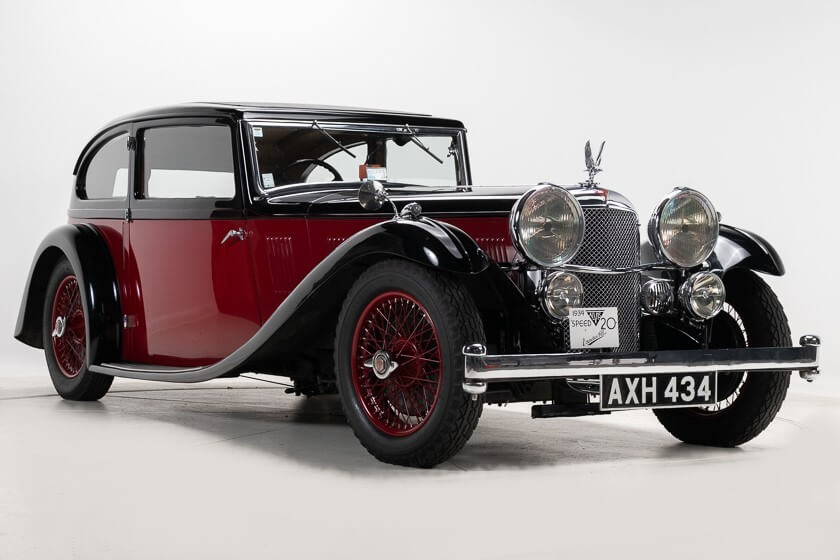 The 1930s was a golden age for the gentleman’s two door saloon. Often considered the more sporting variety of the automobile, the 2 door saloon offered both practicality and style, without the drawbacks of an open top convertible. It was a coachwork format employed with great success by the likes of Bentley, who’s reputation was enhanced by the exploits of the infamous Bentley Boys. One other British marque however produced two door saloons on a par with the likes of Bentley, and that was Alvis. One of their finest examples was the Alvis Speed 20 SB Vanden Plas and H&H Auctioneers are offering a sublime one for sale on the 27th May.

The Alvis Speed 20 was launched in January 1932 and is credited with changing the companies image overnight. It transformed the small firm into a fashionable, up market car builder, its designs attracting the attention of the wealthy and those who appreciated the combination of speed and design. The heart of the Speed 20 was Alvis 2.5ltr straight six engine which had been used in the outgoing Silver Eagle model. The revised and enlarged engine was fitted to a new low slung chassis, which gave it sports car levels of performance. As was customary of the period, buyers could choose a whole host of body styles from a long list of reputable coachbuilders, one of which was the noted Vanden Plas.

The Speed 20 SB followed in October 1933, which featured a revised chassis and independent front suspension. The steering was updated using a system deployed on the firms race cars from 1925 and the Speed 20 benefited from the addition of an all-syncromesh four speed gearbox. Indeed Alvis was the first company in the world to design an all-syncromesh gearbox, which it claimed was near silent in operation. As expected for a luxury motor of its period, an all wheel jacking system was also installed as standard.

H&H Auctioneers are offering a 1934 Alvis Speed 20 SB Vanden Plas Two-Door Saloon during its online only sale on 27th May. This particular example is one of eight known survivors and currently resides in New Zealand. It was first registered in London on the 24th January 1934 and later moved to West Sussex. In November 1970 it was acquired by W.O. Bentley dealer Stanley Mann who sold it to New Zealander David Curry.

It then passed to Joe Marsden in 1973 who spent two decades carrying out an extensive restoration, which subsequently stalled. It was then acquired in 2008 by the President of the Alvis Car Club of New Zealand, John St. Julian. It subsequently passed to its current owner in 2017.

This Alvis Speed 20 is described as being in excellent condition and has been mechanically refurbished by the current owner. It is said to drive well and is noted to have performed superbly during an Art Deco parade in the town of Napier, despite temperatures reaching 37.5 degrees Celsius. The owner claims that the installed electric fan did not cut in during the 40 minute, 1st gear only drive on the parade.

Other improvements included changing the pedal layout to follow more modern standards, which involved moving the accelerator to the right of the brake pedal. This precautionary change (which is reversible) was carried out after the seller had a close call with a fence. The trafficators work and integrated indicators have also been fitted. The listing notes that the original logbook from 1972 is present in the history file which should assist with re-registration should the Alvis return to the UK.

Long considered one of the most desirable of all coachbuilt Alvis models, the “Flatback” Speed 20 combines superb Art Deco style with a rich sporting pedigree. The Speed 20 was a noted performer in its day and with triple carbs and that exquisite straight six engine stretching out in front, it has all the right ingredients for a Sporting two door saloon. The model earned it’s “Flatback” nickname due to the rakish style of the rear window. It was just one part of an Art Deco inspired design that saw an airline styling trend take hold in the automotive industry on both sides of the Atlantic. The lines of the Speed 20s Vanden Plas coachwork are exquisite, with the black over red two tone paint adding a touch of class to an already impressive looking motor car.

With an online auction estimate of between £80,000 – £100,000 plus buyers premium, this 1934 Alvis Speed 20 SB Vanden Plas is the ideal acquisition for the motoring enthusiast looking to own a slice of the iconic 1930s sporting two door saloon. It harks from a bygone era of motoring when technological innovations were pushing new boundaries of both speed and comfort. It combines the very best coachwork of the era with the legendary Alvis straight six that would go on to power its cars for many decades to come. If you are looking to stand out from the Bentley crowd, then this Alvis Speed 20 SB Vanden Plas is the one for you.

More details on this Alvis Speed 20 SB Vanden Plas can be found on the H&H website.