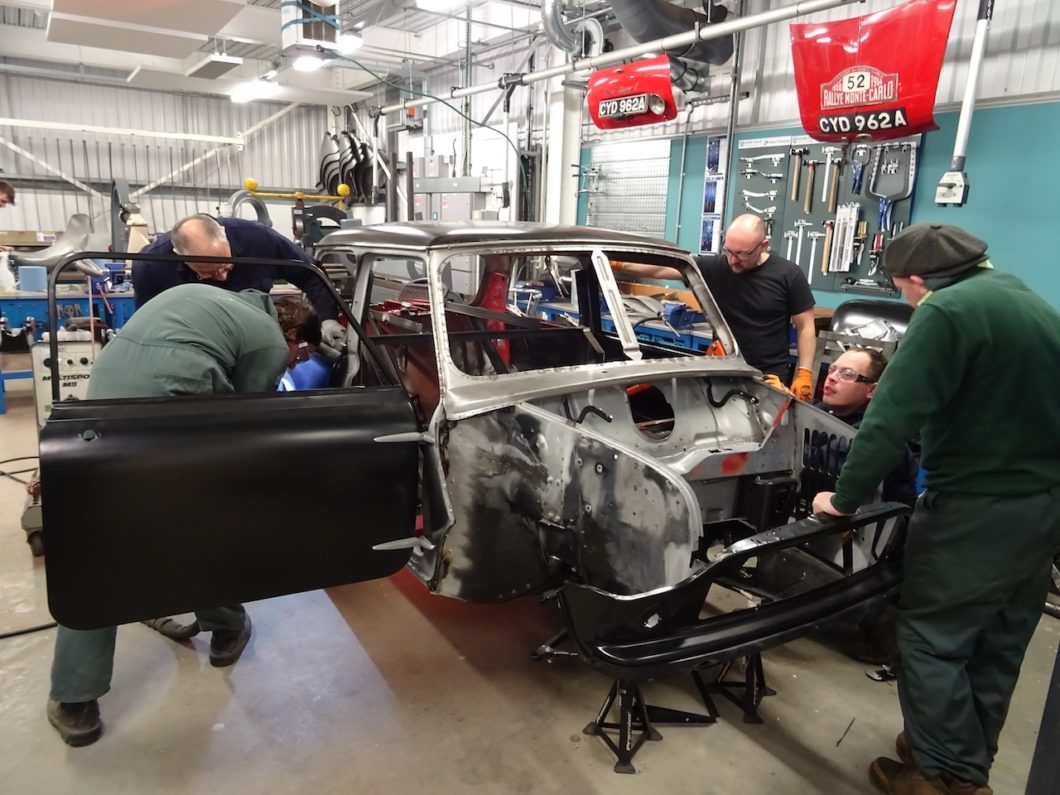 The Brooklands-based Heritage Skills Academy has announced that a classic Mini project that is being restored by a group of its apprentices is set to air on Yesterday TV.

The restoration project is being assisted by British Motor Heritage (BMH), with the company treating the trainees to a tour of its Witney factory and helped with the jigging of the new panels, which it also discounted for the cause.

The entire project has been filmed by Middlechild TV, the result of which will be aired on the Yesterday Channel as part of Middlechild’s acclaimed series Secrets of the Transport Museum.

Based within the Brooklands Museum that’s the focus of the series, the ‘Heritage Skills Academy’ (HSA) operates a 42-month block release apprenticeship in the traditional coachbuilding skills required by the thriving classic car industry.

Commenting on the Mini restoration, Owain Johns, Development Director stated: “The coachwork and related mechanical course were established in direct response to the demands of the industry, and among the current crop of 150 apprentices we have representatives of such well-known classic car businesses as, Bristol Classic Car Restoration, Electrogenic, Lunaz, and Richards of England. The companies are great believers in what we are doing, and the apprentices love switching between their day jobs and the practical form of education we supply. It’s a win-win situation.”

Graham Payne, BMH Managing Director added: “We were very impressed by the apprentices when they visited our factory. So much so that we are seeking one of our own, and will certainly continue to aid the HSA in any way we can, as it is providing an excellent and much-needed service to our industry.”

The classic Mini the apprentices are restoring belongs to businessman Rob Pike. At the age of 18 he wanted a MKI Mini-Cooper, but could not obtain suitable insurance, so bought a new MKV Mini instead. Thirty-two years later, his teenage dream is being realised. As well as restoring what had become a rotten wreck, the apprentices are also converting the car from MKV to MKI Cooper specification. It’s another win-win situation for the cars owner.

Further details of British Motor Heritage are available at www.bmh-ltd.com, while info on the unique HSA apprenticeships can be found at www.heritageskillsacademy.co.uk.