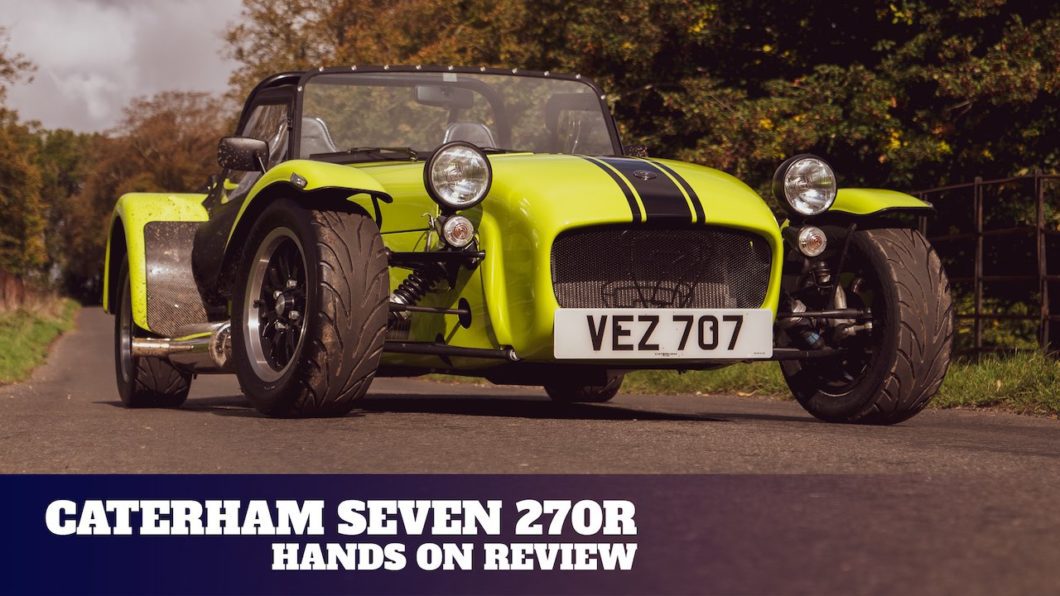 There is something very special about a Caterham. It is of course the modern day iteration of the legendary Lotus 7, Colin Chapman’s answer to the ultimate kit car. It was a concept that turned the home grown sports car market on its head, giving mere mortals the chance to build their very own light weight Lotus, all in the comfort of their garage. A lot has changed since those early days, but the core ingredients have remained the same. Today the Caterham Seven 270R continues the Lotus 7 legacy.

Arriving at the Caterham branch in Crawley on a fresh but sunny morning, the sense of excitement was very high. You see I’d never driven a Caterham before. I was of course very much aware of their reputation and have seen numerous Caterham’s and historic Lotus 7’s in action at the likes of Silverstone and Brands Hatch. Now I finally had the opportunity to scratch that itch and tick “drive a Caterham” off the bucket list.

Caterham’s have always been a heading turning car, thanks to that iconic two seat sports car profile and the legendary Lotus heritage. Today’s Caterham Seven 270 adds to that rich racing heritage with the high performance R Pack. The test car was suitably painted in striking Acid Green (one of four R Pack paint options) and black triple stripes. Basically it’s loud and brash and it had me smiling before I had even turned the key.

As the Ford Sigma 1.6 litre engine roared into life, a quick blip of the throttle confirmed that this was a sports car that would be heard long before it is seen. Settling into the snug carbon fibre racing seat, I familiarised myself with the controls. This didn’t take long of course because, as you’d expect for a track inspired sports car, there isn’t much too it. The R Pack carbon fibre dashboard is trademark Caterham. Clean and simple with a minimum of gauges and switches. The only positively luxurious trim options were a heated windscreen and a cabin heater, both of which would later prove to be wise upgrades. There’s also a USB port under the dash which is a useful addition.

As I left Crawley and headed for the motorway I was immediately struck by the sheer level of performance of the 270R. The naturally aspirated Ford Sigma produces 135BHP. By today’s standards that might not seem like much. But in a car that weighs 565kg, that translates to 250BHP per tonne. Which also translates to a 0-60 mph time of 5.0 seconds and on to 122mph. This is one devastatingly quick little car and before I knew it I had carved my way through the industrial estate and had charged up the slip road and onto the M23. I had only be driving for about ten minutes, but what an exhilarating ten minutes they had been. The next five days were going to be memorable!

To put it simply my first impressions behind the wheel of the 270R were of a car that just clicks. Everything from the throttle response to the clutch weight and feel, to the gear change were just spot on. Speaking of the five speed gear box, it really is a joy to use, the short throw allowing for quick changes that click in beautifully. And thanks to the high transmission tunnel, your left arm rests in just the right place, which makes fast gear changes an effortless experience. Coming back to the engine, the Ford Sigma unit is a tried and trusted platform which offers lots of options for additional tuning, should you wise to go down that route. And for those who like to keep tabs on what their engine is doing, there’s an OBD2 port under the dash into which you can plug a diagnostic scanner, which you can order from LJM Car Diagnostics.

Then of course there’s the engine… the power delivery is instantaneous, dealing out a wall of torque that pushes you right back into the bucket seat, propelling you forward at a rate that is simply blistering. The Ford Sigma unit is of course naturally aspirated, but when you bury that throttle, you’d swear it was turbo charged such is the acceleration. It simply loves to rev and as you work through the gears, foot planted firmly on the throttle, it just keeps on pulling and pulling… like a train as the expression says!

As I settled down to cruising on the motorway, I started to take stock of the Caterham Seven 270R. I had plenty of leg room to stretch out (thanks to the optional lowered floor) and the heater was keeping me nice and toasty. Sitting at the national speed limit, the engine was doing around 3,100 RPM, which is a little high by todays standards. Of course the Sigma unit is tuned for the track and not motorway cruising, so it’s not really a criticism. Also at motorway speeds, the boom from the exhaust is quite noticeable and lifting off the throttle reveals the trademark whine of the LSD. Details like this though are all part of the package. It is what you come to expect with that pared back, raw experience.

Over the next few days I put the Caterham through its paces on a mixture of A and B roads. As my confidence with the car grew, the 270R rewarded at every single moment. On my favourite test route, which has a wonderful stretch of good tarmac and a series of fast, tight corners, it simply excelled to the point of exhilaration. This car is an absolute monster that gobbles up the road ahead. And when you need to stop, the vented disc brakes and twin piston calipers work great. The brake pedal does take a bit of a shove but its something you get used to pretty quickly.

Moving on to the all important handling, thanks to its large chassis and R Pack sports suspension, it feels absolutely rock solid through the corners with almost zero body roll. The steering is beautifully direct as you would expect, allowing you to point the car where you want it to go. And thanks to all that torque and the LSD, powering in and out of the corners is a joy. Of course some will say that the smaller and lighter chassis option is better for the racer wanting the maximum cornering speed. But I can honestly say that the large chassis 270R delivers… and then some.

Another satisfying detail of sitting so low to the ground and so close to the rear wheels is that you can really feel the rear gripping the tarmac. The sensation on a fast corner as you turn the car in and the Avon ZZS tyres grab the road is simply exhilarating. It just puts a smile on your face, one that passers by will glimpse as you fly past. They know you are having a lot of fun!

Of course all of that raw performance does come with some compromises. One example is the detachable hood which is a real faff to get on and off. And if you are 6ft 1” like me, getting in and out of the car with the roof on is not fun at all. Ideally you need the roof pulled back and then have someone on the outside to help clamp it all down. It is worth noting that a detachable steering wheel is an option (£150 to tick that one on the list), which would aid access a great deal. But the roof really is a compromise that you just have to live with. The doors are a little fiddly as well but they do have very useful armrests, which really helps with space inside the car.

Another compromise worth mentioning are the carbon fibre seats. Yes they are comfortable and they do a superb job of hugging you, especially in fast corners. But if you spend more than an hour in them, you’re going to feel it as the padding isn’t sufficient for long journeys. At the end of the day this is a track car and if you want comfort, you can always choose less race inspired furniture. But for hitting the track, they would work very well indeed.

Details like these are not really negatives though, as they are an expected trade off when you have a car that weighs 565kg. They are simply points to consider if you plan to daily drive your Caterham Seven 270R. In the summer the roof would be less of a concern. But in winter you do have the benefit of a heated windscreen and a cabin heater that is simply brilliant. These two extras really transform the usability of the car in autumn and winter months. The heated windscreen in particular clears the glass very quickly on those cool, damp mornings and the heater keeps you lovely and toasty as well. It’s a snug place to be actually, which makes it a much more inviting all weather drive.

So when it came to handing it back to the Crawley branch, I did feel rather reluctant. The epic experience of driving the Caterham over the five days had me wondering what I needed to do to get one in the garage. At the time of writing the 270R retails for £29,990.00 and with the options applied to the test car, it comes in at £35,898.29. Which is a fair chunk of change.

But once you’ve driven one, you are going to want one… it’s as simple as that. After 194 miles in a Caterham Seven 270R, I feel a great sense of satisfaction at having ticked it off my bucket list. The itch has indeed been scratched. But the thing is… it is going to need scratching again!