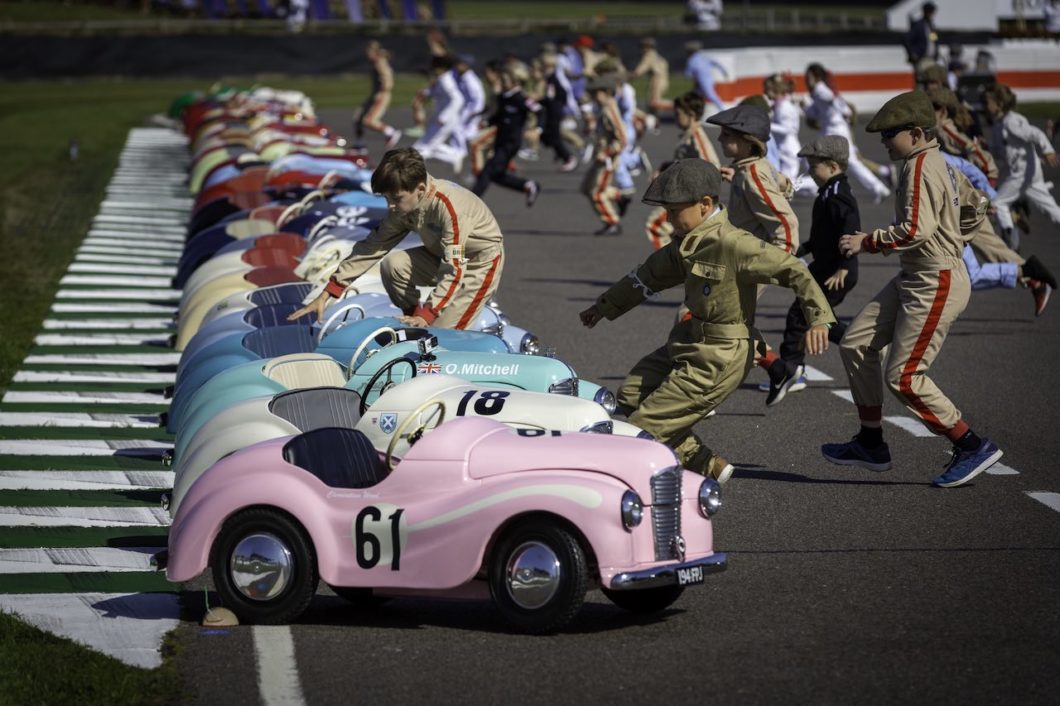 The 2022 Goodwood Revival is set to mark the 10th anniversary of the Settrington Cup race, the famous pedal power only race that is one of the cutest in the world. At this years Revival aspiring racing drivers aged between 4 and 11 will once again be lining up on the famous Goodwood grid for a chance of motorsport glory.

The Settrington Cup was named after one of the nine titles held by the Revival’s founder, The Duke of Richmond who is also Baron of Settrington. The race is contested over a distance of c. 220 metres down the Pit Lane Straight and is a highlight of the Revival weekend.

Taking place on both the Saturday and the Sunday of the Goodwood Revival, the grid is settled by pulling numbers out of a hat, and whoever is on pole position on Saturday starts at the back on Sunday in a reverse-grid race.

Debuting at the Goodwood Revival in 2012, the Settrington Cup is now firmly-established as one of the most highly-anticipated and hotly-contested of all the weekend’s races.

A hush descends over the grandstands as the cars make their way from the Paddocks to take up their places on the historic Motor Circuit.

And then the excitement begins with a running – or Le Mans-style – start, as the diminutive drivers, aged between 4 and 11 years old, get behind the wheel of their Austin J40 pedal cars and proceed at full pelt down the Pit Lane Straight.

Goodwood has also announced a programme of activity to celebrate the 10th anniversary of this unique race. The Race Flag Competition will give one lucky winner the opportunity to race The Duke of Richmond’s own Austin J40 in the Settrington Cup at the Revival in September.

Open to children aged 4 – 11, entrants will need to download and print this template, create their design, and then submit their entry either by post or email. The competition closes on Sunday 5 June, with the winner due to be selected and their design created for use at the Revival race. Full details of the competition, including the Terms and Conditions can be found here.

Goodwood will also be bringing some of that special Settrington Cup spirit to the Classic Car Sunday Breakfast Club at the Goodwood Motor Circuit on Sunday 24 July, which will host the ‘Official Testing’ for the race. Testing offers drivers the chance to familiarise themselves with the track ahead of the race meeting and fine-tune their strategy – no less important when you’ve only got pedal power under the bonnet. The Testing Day will enable our Race Flag Competition winner to get behind the wheel of The Duke’s Austin J40 for the first time and practise ahead of the Revival.

The anniversary celebrations will culminate at the Revival with the race itself, running on both Saturday 17 and Sunday 18 September. The winner of the Race Flag Competition will take to the track and, along with the rest of the grid, pedal furiously towards the finish line, where they will be able to see their design being waved.

With a decade of delightful memories in the rearview mirror, ticket holders for this years Goodwood Revival can look forward to fun 10th anniversary celebration.