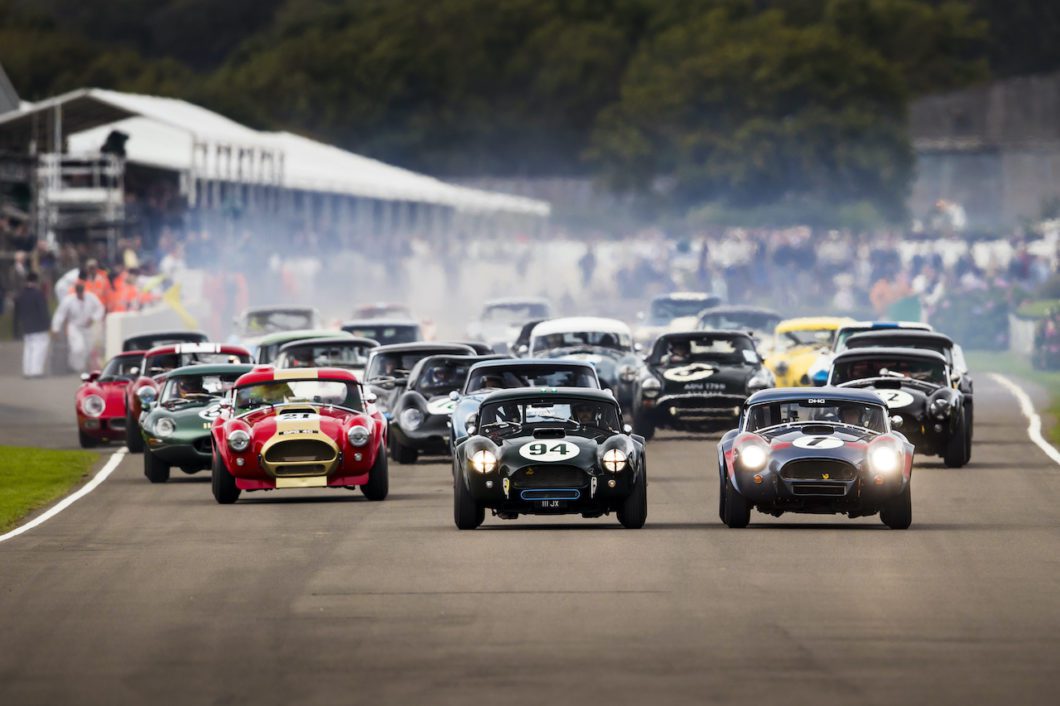 Goodwood has announced its race schedule for the highly anticipated 2021 Revival, which will take place from 17-19 September. With just four more months to wait, fans can look forward to the restarting of motorsport and a gripping weekend of historic racing action. Take to the Road takes a look at the upcoming race schedule, which promises a glittering grid of historic motors.

2020 was a difficult year for all with significant disruption to our everyday lives. One of the many casualties were public events like the Members Meeting, Festival of Speed and the Revival, all of which were postponed. There was a glimmer of home with the staging of the superb Goodwood Speedweek, though this had to take place behind closed doors, albeit the event was live streamed, so fans could at least watch the action from home. It is hoped that restrictions will have eased sufficiently by September to allow fans to return in large numbers to the hallowed ground that is the Goodwood Motorsport Circuit.

Formerly known as the Kinrara Trophy, the signature Revival race has been named in honour of ‘Mr Goodwood’ following his passing in 2020. It features one of the most beautiful grids of the weekend as a field of Jaguar E-Types and Ferrari 250 SWBs do battle with the likes of Aston Martin DB4GTs, AC Cobras and a host of early-60s GT racers.

Renamed from the Goodwood Trophy for 2021 to celebrate 70 years since the original Festival of Britain on London’s South Bank, this grid will feature some of the finest Grand Prix and Voiturette cars of the 1930s and ‘40s, recapturing the derring-do atmosphere of inter-war racing as ERAs do battle once more with Maseratis, Alfa Romeos, Talbots and the like.

Once again this will be for Grand Prix motorcycles of the 1960s. Previous races have seen tremendous battles between the iconic British Manx Norton and the Italian MV Agusta. A key element of this race is the two-rider format with VIPs invited to compete alongside a professional.

One of the highlight races of the weekend, the St Mary’s Trophy will see saloon cars of the 1950s do battle, harking back to the earliest day of the British Saloon Car Championship.

Saturday’s race sees some of the biggest names in international motorsport compete in part one, while the cars’ owners take their turn on Sunday, with an aggregate result.

This is the fastest and loudest race of the weekend and, for the 20th time at Revival, will feature some of the most spectacular action as Lola T70 Spyders take on Ford GT40s, McLaren M1s and a host of sports prototypes that raced up to 1966.

This one-off race for 2021 will celebrate 60 years of the Mini Cooper by pitting 30 of the diminutive saloons up against each other in a two-driver, 45-minute challenge. Following the success of the all-Mini St Mary’s Trophy in 2009, and the Betty Richmond Trophy at the 77th Members’ Meeting, this is sure to be one of the closest and most exciting races of the weekend.

Possibly the most glamorous race of the weekend, the Sussex Trophy is run on Saturday afternoon for World Championship sports cars and production sports racing cars of the late 1950s. The race is a glorious reminder of the early Tourist Trophy competitions at Goodwood, when Jaguar D-types, Listers, Ferraris and Coopers would do battle.

This year’s Chichester Cup is for front-engined Formula Juniors. Featuring one of the widest line-ups of manufacturers on any Revival grid, the Chichester Cup will open up Sunday’s racing action with what is sure to be an exciting and close encounter.

The second round of two-wheeled action sees Sunday’s riders look to consolidate the advantage gained by the previous day’s competition. The unique Le Mans start in which riders sprint across the grid to jump aboard their waiting machines is always a highlight of this race.

Named in honour of Britain’s first purpose-built motor racing venue and Goodwood’s spiritual forebear, this race will feature some of the finest examples of sports cars from the roaring ‘20s and the ‘30s, evoking memories of those great races from Brooklands and Le Mans.

The blue riband race of the Revival – a one-hour, two-driver race featuring some of the biggest names from the world of motorsport. This race has become one of the most prestigious in all of historic motorsport, with a grid of the finest closed-cockpit GT cars going head-to-head on Sunday afternoon for top honours.

Always a thrilling encounter, the second part of the St Mary’s Trophy sees the owners of the 1950s saloon cars take their turn behind the wheel, pushing their cars to the limit in search of an aggregate victory.

First held in 1949, this race for 1.5-litre Grand Prix machinery of 1961 to 1965, will see the swinging sixties style of Grand Prix racing brought back to Goodwood once again as the very best offerings from Lotus, BRM, Ferrari and the like fight for victory in the 40th running of the Glover Trophy.

As the sun sets on a wonderful weekend of racing, the Freddie March Memorial Trophy pays homage to the Nine Hour races that graced Goodwood in 1952, ‘53 and ‘55. This endurance-racing retrospective features a beautiful grid with the likes of Aston Martin, Ferrari, Jaguar and Maserati, ensuring that spectators leave the Revival on Sunday evening with smiles on their faces.

Further details about the Goodwood Revival will be made over the coming months and you can keep up to date with all the latest Goodwood Motorsport news by subscribing to the Take to the Road Newsletter.