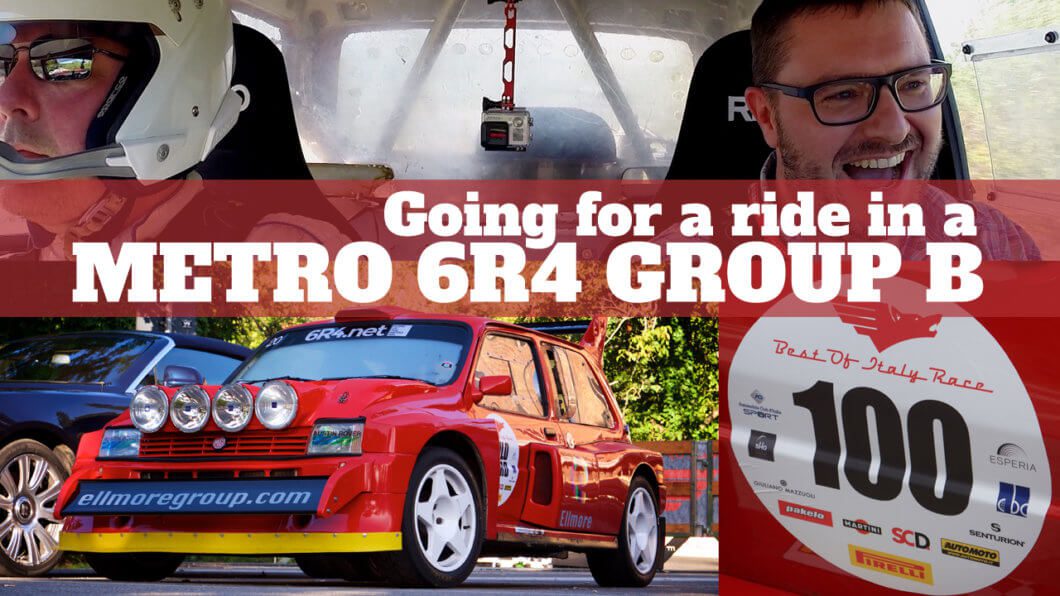 Last Sunday, while marshaling at the Best of Italy Race, I got the chance to go for a ride in a 1987 Metro 6R4 Group B Rally car. As I write this I am still pinching myself that it actually happened. You see for a child of the 1980s (yup that’s me), Group B Rally cars were the ultimate race cars. For me Forumla 1 wasn’t really on the radar much as it wasn’t accessible. Rally Cars were however. The twisty country roads of Ireland were the favourite stomping grounds for souped up Ford Escorts and Opel Manta’s. They were fast, loud and they were covered in racing stickers. For a car obsessed kid they were heaven on wheels. And on Sunday I was transported back to those days, except this time I was a big child, giddy with excitement at the chance of getting a run in a real Group B Rally car.

When owner Dan Ellmore arrived at the Best of Italy paddock in the town of Castell’Arquato (south east of Milan), I was immediately stopped in my tracks. Here before me, in an old Italian hill top town, was the ultimate MG Metro.

A monster with a reputation for being completely bonkers. I mean that’s what Group B cars were all about. They were at the bleeding edge of rallying technology and pushed both man and machine to the absolute limits. And with the massive flared arches, huge tyres, spot lamps and the large aerodynamic wings, it is hard to believe there is a little Metro under there.

As soon as Dan got out of the car I was straight over chatting with him, admiring the wonder that was before me. Did I say it was bonkers? I think that was my brains inner monologue for most of the morning as I stood there and stared at the beast. It looked even more insane when Dan popped the rear hatch to reveal it’s heart, a massive Jaguar 3.0ltr V6 producing 400BHP (which had replace the original V64V engine). It really is amazing how they shoehorned that thing into the back of a Metro. It shouldn’t have worked but it did.

At this point you are probably wondering why a British Rally car was attending an Italian racing event called Best of Italy. The reason was revealed later that morning when two trucks turned up carrying the Lancia Works Martini cars. Dan’s Metro 6R4 was going to be racing the events 25km closed road with the iconic Lancia’s. It was going to be one hell of a Group B party!

Racing began on the Saturday, the cars starting at Castell’Arquato and heading up hill to the town of Morfasso. My marshaling duties had me at the start line, so I was very very lucky to see the Lancia’s and Dan’s Metro 6R4 race off the line. It was a sight to behold. And the noise…. it was unlike anything I had experienced. Later that evening I asked Dan if I could install some GoPro’s in his car for the mornings run and he happy for me to do that. Excitement was building!

With my marshalling duties keeping me busy during the Sunday morning, I missed the chance to get a camera on the Metro. And with the event finishing at around 2.30pm, I knew I only had one chance left. All the cars and their drivers were enjoying lunch at the finish in Morfasso. After lunch the cars would be blasting back down to Castell’Arquato before the road reopened to the public. With so little time left I asked Dan if I could get a ride down. I knew it was a long shot but as they say if you don’t ask you don’t get. He said a couple of others had also asked ahead of me so I would have to wait to find out. At this point my chances were pretty slim. Then to my amazement I got the thumbs up from Dan! From that moment everything was a blur as I rushed to get the cameras setup, the other marshals trying to get us moving asap.

And with that we blasted off down the hill. The noise and acceleration was amazing and this was only after a quick shift up through the gears. As we nailed it found the first few corners I was mesmerised by the whole experience. I’d only been in the car for a few minutes! The whine from the transmission coupled with the roar from the V6 and the Weber carbs was just sublime. It was raw and it was loud but I didn’t care. This thing was a beast!

Unfortunately after a couple of bends, Dan realised that the clutch had a problem. Up shifting was ok but down shifting the sequential 5 speed wasn’t going as it should. So he decided to run the car quick for just a little while and then go steady. Even though he didn’t push the car hard into the bends, it still felt quick. The grip really was phenomenal, the compact little hatchback chucking itself around the corners like it was on rails. And all the time I felt quite comfortable in the racing seats. It was actually a nice place to sit. With 400BHP just behind my head!

I have to say that at this stage I had forgotten to talk to the camera. I was enjoying the ride so much (it made me grin a lot… actually I spent the whole ride grinning I think), taking in the noise of that V6 engine… and coupled with the smell of petrol and the wonderful Italian scenery, it was just awesome! For large parts of the run I was just one big silly, grinning fool!

Getting stuck behind the camper van was a real pain and as Dan had said if the car was driving right he would have gunned past it with ease. We lost the chance to really enjoy that stretch of twisty tarmac thanks to that camper van. It seemed like things were going against us. And as we neared the finish and the paddocks at Castell’Arquato, the cars gearbox really did start to suffer. As we limped to the paddock entrance, Dan killed the ignition, the car lurching as it got stuck in first gear. It really wasn’t happy at all. And neither was Dan. The last thing you want is for your clutch to go on any car. But for it to happen to a Metro 6R4 at a race in Italy… that sucks! Big time!

Despite the car not running as it should, I really enjoyed the ride. Actually it was more than enjoyable. It was awesome! It was epic! It was a pure adrenaline rush that excited all the senses. It really was one of those moments I won’t forget. A moment where I got to ride in a real Group B Metro 6R4 Rally car. I will never look at a MG Metro in the same way again!

Find out more about the history of the Metro 6R4 on the www.6r4.net website.

Check out the Metro 6R4 and the other amazing classics and supercars in our Best of Italy Highlights video.

Ps… it turns out Dan boiled his clutch fluid chasing the Lancia works cars earlier in the day. He has since changed the clutch fluid and replaced the clutch. So Metro 6R4 188 of 220 is back up and running!

Additional Photos of the Metro 6R4