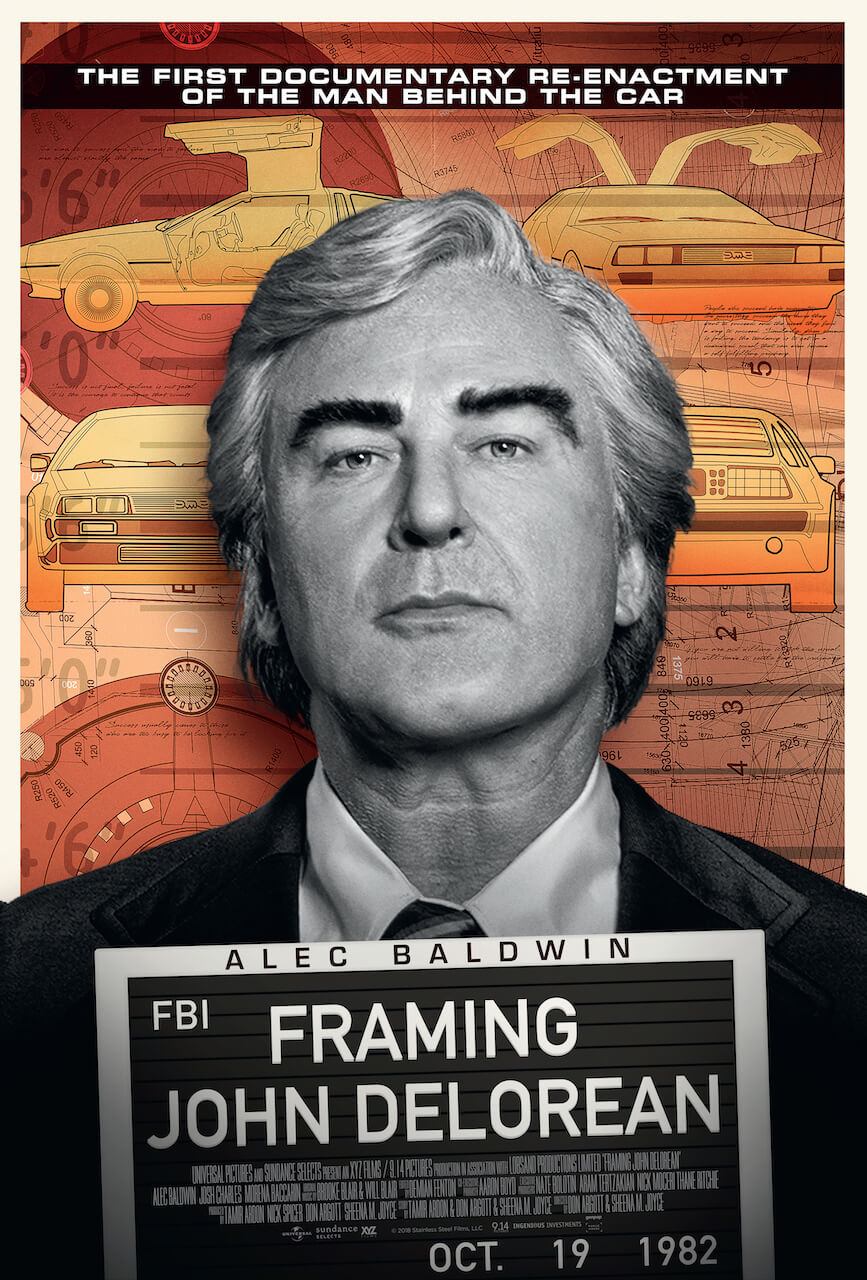 If there is one car that defined the 1980s it was the DeLorean DMC-12. It is one of the most iconic automobile designs of all time, a concept that defined a whole new era for the sports car market. Plus it was given immortal status by the Back to the Future trilogy. Then of course there was the man behind the dream, the maverick of the American auto industry, John DeLorean. Now over 30 years after the spectacular collapse of the DeLorean empire, Framing John DeLorean, the story behind the rise and fall of one of the most controversial figures of the car world, has been told through a fascinating new cinematic documentary.

Staring Alec Baldwin, Morena Baccarin and Josh Charles, the story of John DeLorean has finally been brought to the screen by Producer and DeLorean Historian Tamir Ardon. Here’s what he had to say about the documentary that was 15 years in the making.

DeLorean is a name that carries so much weight. The car, the movie trilogy and of course the controversy and scandal. What attracted you to this documentary? This telling of the John DeLorean story?

For me I am a big car fan, always have been since I was a kid. The DeLorean story has always been a passion for me, a hobby. And I was fortunate enough to be in the entertainment industry so I was able to turn that passion into this feature film. I saw Back to the Future when I was 5 years old, so I’m a kid of the 80s. I saw my first DeLorean a year later at a gas station and the owner kindly let me sit in it. I just felt this special connection with the car.

Then in the 1990s, when the DeLorean DMC-12 values had dropped very low, I was lucky enough to buy one. At this point I had moved past the movie fascination and was more into the car itself. I found the story of the car so interesting that I did a real deep dive into the history and eventually built a website about DeLorean.

Then in 1999 I actually cold called John DeLorean himself. I met him in New Jersey and we hung out and that’s when our friendship sort of started. From 2004-06 I went to film school in California and it was then that I decided that I should be the one to hopefully tell John DeLorean’s story in the proper way. It’s been a 15 year journey with a lot of different turns along the way. We decided to make a documentary that was different in style to other DeLorean documentaries, that was shot in a cinematic style like a feature film. We wanted to pose the question of who John DeLorean really was. Plus we decided to include behind the scenes footage with the actors to help enhance the story and understand the characters.

Choosing Alec Baldwin to play John DeLorean was a master stroke. He brings a focused and analytic style to the role and at times the resemblance right down to the mannerisms of John DeLorean is uncanny. Did Alec appreciate the gravity of the DeLorean story?

Oh absolutely! He said on many occasions he wouldn’t have taken on the role if he didn’t think there was a redeemable aspect about John. He knew there was many multidimensional aspects to John’s character and he found it a real challenge to play. As a person John didn’t have a lot of highs and lows, in terms of his persona. He was always very even keel, which is hard to portray as an actor when you have to deliver in a very monotone way.

Alec also saw all the angles on DeLorean, in that he was a tragic figure, but who was also an amazing maverick. Plus the fact that John actually reached out to Alec in 2004 was a fascinating layer to the whole story. Our jaws literally hit the floor when he told us that John phoned him out of the blue. It made the story come full circle, like it was meant to be.

Looking back on the saga, the fame and glory of his career and his ultimate downfall, how hard was it to follow the narrative and cut through all the speculation and conspiracy theories surrounding his infamous cocaine arrest?

That’s exactly right because what is interesting about the DeLorean story as a whole is that there is a lot of myth and bull in the ether. It all starts with John’s ability to spin the press from a young age. He was honestly the first person to brand himself, something we are so familiar with and exposed to now on a daily basis. He was the first person to truly try and make a brand out of his name and it be synonymous with success.

With the documentary we were trying to stick close to the truth but some of the fictional scenes are all based on actual stories we were told or word for word recreations of the FBI surveillance footage. As a DeLorean historian I learned that you certainly could chase down some of the conspiracies and have fun with them. When we interviewed former Secretary of State for Northern Ireland Lord Prior, we did get the impression that there was likely a deal between the British and American Governments which allowed the FBI the time to take John DeLorean down the drug entrapment road.

In the background of the entire saga is his family. His son Zach is clearly still suffering from the fall out from the collapse of his fathers dream. Because what John’s family went through, that was ultimately the real tragedy.

I know… obviously we want people to watch the film and leave with their own views of who and what John was. The collateral damage is very haunting. To see what one mans actions 30 years later can look like in terms of a domino affect. His daughter Kathryn has sort of figured out a way to pick up her life but Zach is still stuck in this time period of the trauma that occurred. It is what it is and you are exactly right, it is all kind of John’s own doing.

There were several opportunities where he could have made adjustments, taken key decisions that would have not lead him down this path. But unfortunately his hubris was too great. He dug himself into this hole. And what’s tragic is he did pull it off but he couldn’t figure out a way to be patient enough to reap the success and the rewards. He personally made decisions that gambled with the jobs of the DeLorean factory workers in Belfast, despite saying he wanted to save them. And he is a weird sort of figure like that, you are sort of rooting for him even though he is undoing himself at the same time.

For you personally as a DeLorean historian, what is the highlight of Framing John DeLorean?  And has the DMC-12 finally emerged from the shadows?

The best thing about the film for me is that it tells the true story. It doesn’t take the traditional Hollywood liberal fictionalisation and run with it in a wild way. It sticks to the facts and in reality the facts are so much stranger than anything you could make up. I’m also very happy that John’s kids loved the film and that even his wife Cristina, who didn’t do an interview for the film but spoke with our actors behind the scenes, she really loved the film as well. It’s created a sort of healing process for all of them, on a subject that none of them had really talked about for 30 years. So I am really proud of that.

From the DeLorean DMC-12 perspective, I think the car is always going to be iconic because of Back to the Future. But hopefully now more people will understand the history behind not only the car but the person that made it.

Framing John DeLorean is opening in London’s Prince Charles Cinema on Friday 19th July for one week only. Tickets are available here.