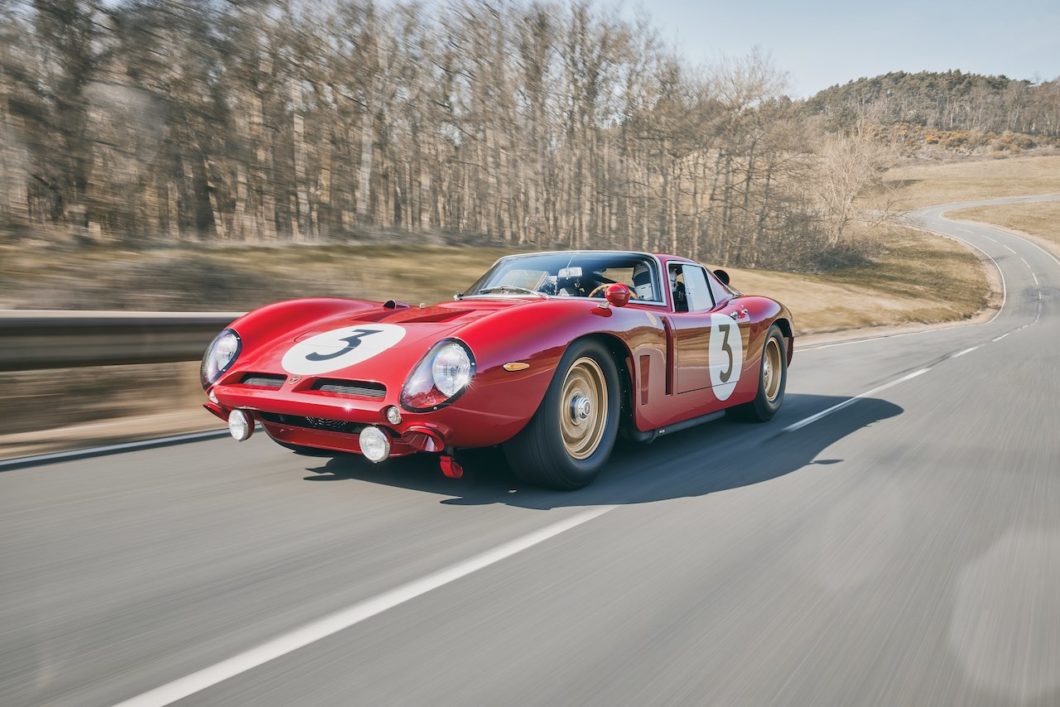 Bizzarrini has announced that it has reached a significant milestone in the rebirth of the legendary brand, with the first Bizzarrini 5300 GT Corsa Revival prototype taking to the road for final endurance testing.

Built at Bizzarrini’s dedicated manufacturing facility in the UK, the 5300 GT Corsa Revival is the most authentic interpretation of the 5300 GT available. Built using original blueprints, utilising materials from original suppliers, with the input of experts originally involved in the 5300 GT project, some key improvements have been added with modern safety regulations in mind.

The original car’s fuel tanks were located deep in the sills, as well as behind the driver, for example, but now – using advanced 3D scanning – Bizzarrini engineers have created a tank intricately shaped, filling the available void in the chassis to tolerances and accuracy not available to the original designers. The overall fuel capacity is only marginally reduced, at 95 litres, keeping the range within the requirements of a multiple round race series.

The painstaking dedication to authenticity even extends as far as this car’s paintwork. There is a long and complex history surrounding the colour known as Rosso Corsa, with many shades purporting to be the original. To ensure the car looked exactly as it would have in period, the Bizzarrini team tracked down a paint colour sample from an original panel, which had been hidden from light since it was first painted, perfectly preserving Bizzarrini Rosso Corsa. This shade was then colour-matched for the Revival to create Rosso Corsa Bizzarrini 222.

First developed as a high-performance variant of the Bizzarrini-engineered Iso Grifo A3C, the 5300 GT Corsa was designed by Giorgetto Giugiaro with refinements by Piero Drogo of Carrozzeria Sports Cars. Incorporating a tried and tested V8 engine, the 5300 GT was light, fast and reliable.

Famed for its performance in the 1965 Le Mans 24 Hour Race, perhaps the most legendary 5300 GT is chassis 0222. That summer, French racing drivers Regis Fraissinet and Jean de Mortemart took the over 5-litre class win at Le Mans, also finishing ninth overall. Not only did Chassis 0222 run the race at an average speed of 169km/h, Giotto Bizzarrini himself then drove the car back home to Northern Italy immediately after the race. The 5300 GT Revival Corsa prototype takes livery inspiration from this legendary car, encapsulating the spirit of a bygone age of high-performance race cars and the genius behind them.

In radically adapting the Corsa for track driving, Giotto Bizzarrini fitted bespoke independent rear suspension and shifted the front-mounted engine as far back in the chassis as possible. This revolutionary approach to weight distribution proved a key advantage against many contemporary front-heavy cars. In testing the Revival, modern measurements show that each corner of the car carries 25% of its overall weight, illustrating the visionary genius of Giotto Bizzarrini to design a car in 1965 that still delivers perfect balance in 2022.

Each car in the Revival series of 24 vehicles will be hand-built, with a lightweight single piece composite body, over a steel frame. Inside, the two seats are protected by a more comprehensive six-point roll bar and safety fuel cell, meeting FIA Appendix K historic racing regulations. Test drives of the Revival revealed a car that feels subtly more rigid than original examples.

One of Giotto Bizzarrini’s most valuable talents was his ability to push the limits of contemporary engineering. The original 5300 GT made extensive use of the strongest lightweight material of its day, glass fibre. “Had it been available, we believe Giotto Bizzarrini would almost certainly have deployed carbon fibre in his racing cars,” said Richard Quinlan COO of Bizzarrini. “As a result, the 5300 GT Revival Corsa will be offered with a full carbon fibre bodyshell as standard for those customers who do not need to conform to Historic Racing regulations.

The 5300 GT Revival Corsa will be the first model to bear the Bizzarrini name for more than 15 years. After the completion of the development prototype, a total of 24 customer cars will be built, each offered as the most authentic contemporary interpretation of the 1965 Le Mans class-winner. Designed to be driven, each Bizzarrini 5300 GT Revival Corsa can be modified to match its customer’s exact specifications. “The car is of course engineered for racing,” said Richard Quinlan “but we will also be able to satisfy the desire of any customer who wishes to drive this spectacular car on the road.”

Simon Busby, Bizzarrini CMO said, “We have an ambitious long-term vision for the Bizzarrini brand, and the 5300GT Corsa Revival serves as either an introduction or a reminder of the storied heritage of Bizzarrini. We were thrilled with the car’s performance during endurance testing, delivering the same adrenaline-fueled driving experience as Giotto Bizzarrini’s original design.

“Now, as we complete the process of building the cars for our customers throughout the world, we are refining the initial engineering and design proposals for our modern supercar. Utilising the very latest technologies, and built with the ethos, passion and values of our founding genius, this will truly be a Bizzarrini for a new generation.”

Giotto Bizzarrini is renowned for his work in building the famous Lamborghini V12 engine, first used on Lamborghini’s debut model, the 350 GT. The engine proved such a compelling design that aspects of this engine were used by Lamborghini right up until 2010. Giotto also played the key role in the development of the iconic Ferrari 250 GTO, and in developing the advanced aerodynamics for the legendary Ferrari 250-based ‘Breadvan’.

Giotto’s work at Ferrari came to an unexpected end, during one of the most damaging moments in Ferrari’s history, informally known as the ‘Night of the Long Knives’ or ‘The Palace Revolt’. As the story goes four of Ferrari’s top engineers, including Giotto, revolted against Enzo Ferrari’s running of the business, and the sacking of commercial director Girolami Gardini. Il Commendatore responded by firing them too. For Giotto, it was partly a desire to settle the score with Ferrari that led him to take his creation to Le Mans in 1965, where it won its class.

The first customer deliveries of the 5300 GT Revival Corsa are already scheduled for handover to global clients from May 2022.