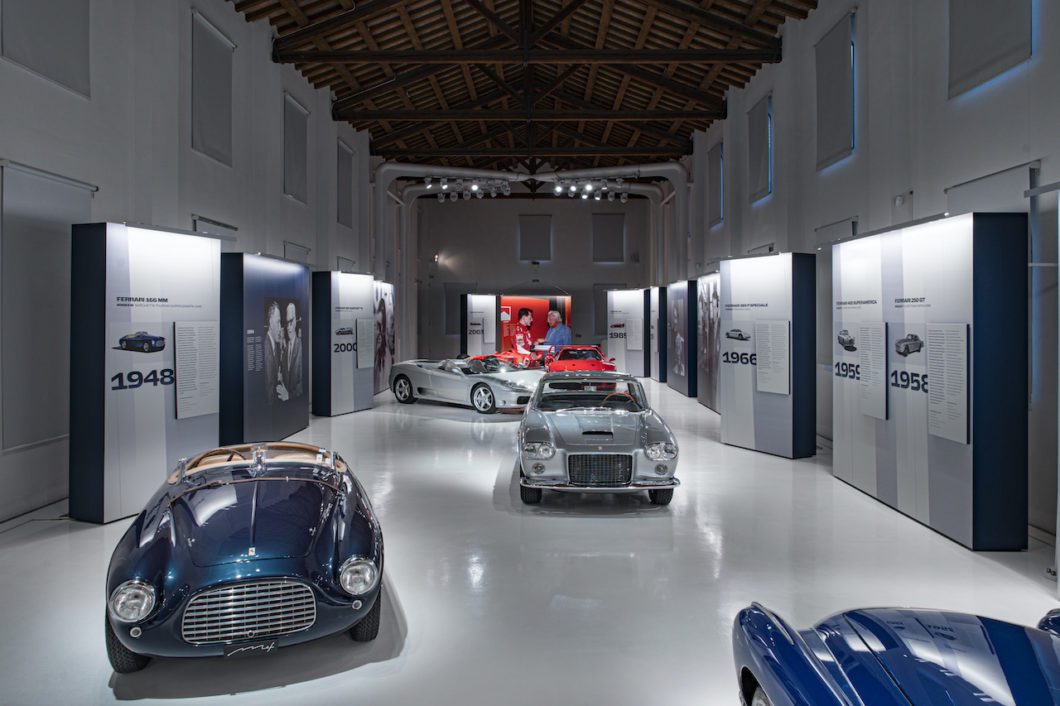 Ferrari has announced a fascinating new exhibition on the illustrious Gianni Agnelli, which has been unveiled at the Museo Enzo Ferrari in Modena. It will bring together the one-off cars built by Ferrari for Agnelli, which were meticulously customised in close collaboration with him. This unique collection is a testament to the symbiotic relationship that developed between two of the most charismatic and authoritative figures of the 20th century and endured for over 50 years.

“Gianni Agnelli and Ferrari. The Elegance of the Legend” is an homage by the Maranello marque to one of its greatest touchstones, first and foremost as a loyal client and later as close confidant and partner, on the 100th anniversary of the latter’s birth tomorrow. The official online opening of the exhibition takes place on March 12 on the Ferrari Museums’ social media channels and website. As we wait for new government regulations to allow us to reopen the MEF’s exhibition halls to the public, we will be organising two free virtual live tours of around 30 minutes each day until April 1. These can be booked on the Museums’ website.

A Prancing Horse enthusiast from a young age, Gianni Agnelli was consistently courteous and respectful in his proposals for highly customised special versions of certain models. For his part, Enzo Ferrari was aware that the influence, aesthetic tastes and personality of a client who was both very close to the factory and familiar with working on exclusive projects, might lead to successful and farsighted choices. The duo’s close relationship produced a collection of peerlessly beautiful and seductive cars, which Gianni Agnelli drove with rigorous understatement.

One such car as the essentially elegant Ferrari 166 MM. Agnelli was so captivated by it at the 1948 Turin Motor Show that he coined a whole new term to describe its sleek lines. The word “barchetta” (little boat) has ever since been used in the sector to describe open-top racing cars. Finely customised in green and blue and with a bespoke cabin, the 166 MM was Ferrari’s first one-off for the Avvocato (the Lawyer) as Agnelli was affectionately known.

The next car to be tailored to the personality of this very special client was the 1952 Ferrari 212 Inter, which was given sophisticated detailing and styling cues that set a whole new trend. Two-tone “family” 456 blue was paired with a magnolia white roof, while two imposing headlights were designed to make high speed driving a pleasure at night as well as during the day.

The exhibition continues with the stupendous and timeless 375 America, a coupé built by Ferrari in 1955 thanks to its symbiotic creative relationship with Battista “Pinin” Farina. The Avvocato was instantly smitten and customised his car with uniquely sophisticated interior trim that included a beautifully-made clock at the centre of the tunnel.

The now well-established relationship between Agnelli and Enzo Ferrari produced yet another masterpiece in 1959 in the form of the Ferrari 400 Superamerica. Bodied and fitted out by Pininfarina, this one-off on show at the MEF opened a whole new chapter in Ferrari grand touring styling.

Also exhibited at the MEF is the 1966 365 P Speciale, the lines of which had been sculpted by the racing world. Pininfarina brilliantly interpreted the car in two three-seater prototypes with a central driver seat. The version commissioned by Gianni Agnelli sports a uniquely elegant silver livery with a slender strip of black moulding running along the belt line.

In 1984, Ferrari unveiled the legendary Testarossa, a car for which no open-top version was planned. However, two years later, the Avvocato commissioned a spider version of the famous model from Pininfarina with some highly sophisticated details, such as a newly designed engine lid and his signature livery colours: magnolia white for the soft top, Nürburgring grey bodywork and navy for the cabin.

Another ground-breaking icon that proved a must-have addition to Gianni Agnelli’s collection was the Ferrari F40. The Avvocato ordered a special version in 1989 with unusual black fabric seat upholstery and a Valeo electronic clutch.

In 2000, Agnelli once again commissioned Pininfarina to create an extreme one-off barchetta, this time using the 360 Spider as the stylistic starting point. Clothed in a silver grey livery paired with elegant blues, this particular car was a wedding gift for Luca di Montezemolo, who was then Ferrari Chairman.

The exhibition concludes with the 2003 Formula 1 car, the culmination of an extraordinary technological and racing journey. It was unveiled by the Scuderia on 7 February 2003 and dedicated to Gianni Agnelli, who had passed away on 24 January. This was a genuinely heartfelt gesture from the whole Ferrari community in memory of an unforgettable partner, client and a refined, discreet and pivotal companion on its long journey.

Ferrari Chairman John Elkann declared: “The exhibition we are opening tells of an extraordinary encounter. It combines, on the one hand, the excitement that the most beautiful cars in the world evoke in people who love driving, and on the other, the enormous respect and real passion that my grandfather had for Maranello cars. A passion that led him to make every Ferrari he owned special and which we are happy to share with all the enthusiasts”.

Deputy Chairman Piero Ferrari remembered the mutual respect and esteem the two great entrepreneurs shared: “My father was impressed by the Avvocato’s power, acumen and ability in business. They understood each other intuitively and that relationship consolidated over the years, culminating in the agreement in 1969 that created one of the strongest partnerships in the automotive world. I was with my father on that historic day when I had the pleasure of meeting Agnelli. From then on, with FIAT by his side, we felt that our company had a guarantee of continuity and development”.