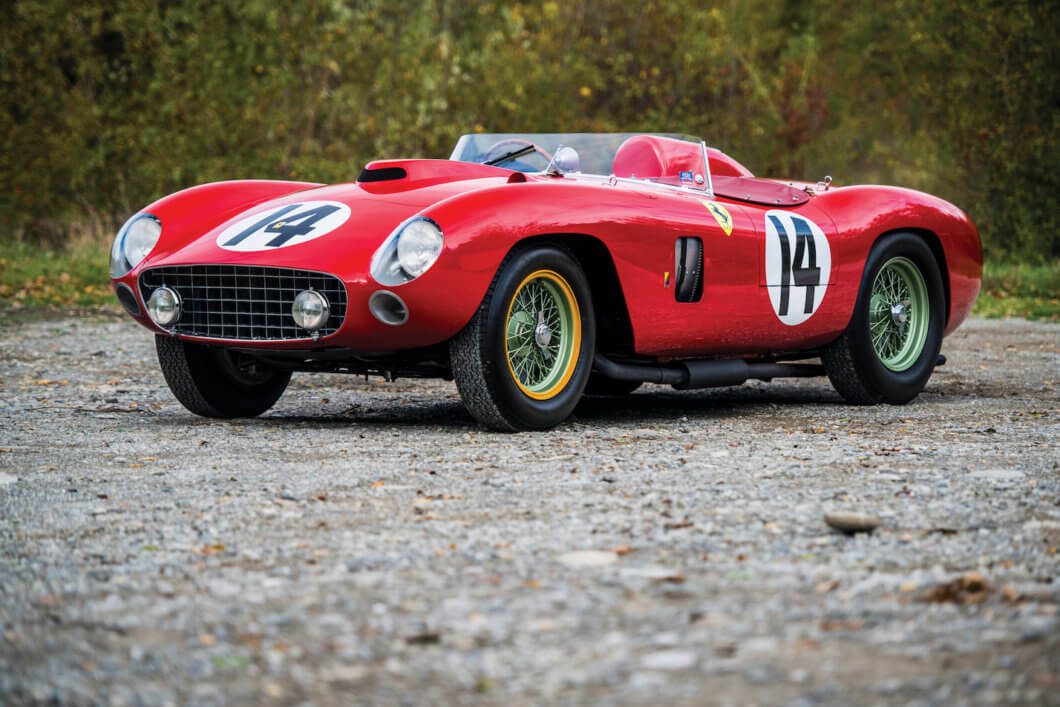 On Saturday 8 December, RM Sotheby’s achieved $39.8 million in total sales at the company’s final auction of 2018 at the renowned Petersen Automotive Museum. Leading the group of 64 vehicles and 77 lots of memorabilia, was the remarkably rare 1956 Ferrari 290 MM, which sold for $22,005,000, entering the ranks of the top ten most valuable motor cars ever sold at auction.

In front of a packed salesroom at the renowned Petersen Automotive Museum in Los Angeles, California, the 1956 Ferrari 290 MM by Scaglietti, chassis no. 0628, fetched $22,005,000 (est. $22m/26m), after an extended bidding contest between three collectors.

Leading the company’s first auction at the recently redesigned Petersen Museum, the fully matching-numbers, Classiche-certified 290 MM was campaigned by Scuderia Ferrari for the 1956 and 1957 seasons.

It was piloted by an amazing roster of factory team drivers including Juan Manuel Fangio, Phil Hill, Peter Collins, Wolfgang von Trips, Olivier Gendebien, Eugenio Castellotti and later, under private ownership, Sir Stirling Moss, in some of the most prestigious events the racing world has known.

In 2011, chassis no. 0628 underwent a full, concours-quality restoration by Ferrari Classiche to its 1957 12 Hours of Sebring configuration, the final race it entered as a Scuderia Ferrari Works car. Of the four 290 MMs built, three have survived, which made this a rare opportunity to own a two-seater sports racing barchetta from what can be considered Scuderia Ferrari’s golden era.

“This weekend’s auction at the Petersen Automotive Museum represented the most successful collector car auction ever held in Los Angeles and was highlighted by spirited bidding throughout the entire auction for lots that were globally sourced for this most unique and impressive venue,” said veteran Car Specialist, Alexander Weaver of RM Sotheby’s, following the sale. “The results re-affirmed market strength in many blue-chip collector cars, along with a continued and growing appreciation for modern collectables.”

“It was an honor to host RM Sotheby’s final sale of 2018 at the Petersen,” adds Petersen Automotive Museum Executive Director Terry L. Karges. “Since our grand renovation in 2015, we’ve dreamed of partnering with this world-class auction house to bring automotive treasures from the nation’s top collections to the heart of Los Angeles car culture. We’re delighted to announce that this has been the most successful auction we’ve hosted in our 24-year history, and we look forward to continuing the tradition for many years to come.”

More details on the results of the Petersen Automotive Museum sale can be found on RM Sotheby’s website.