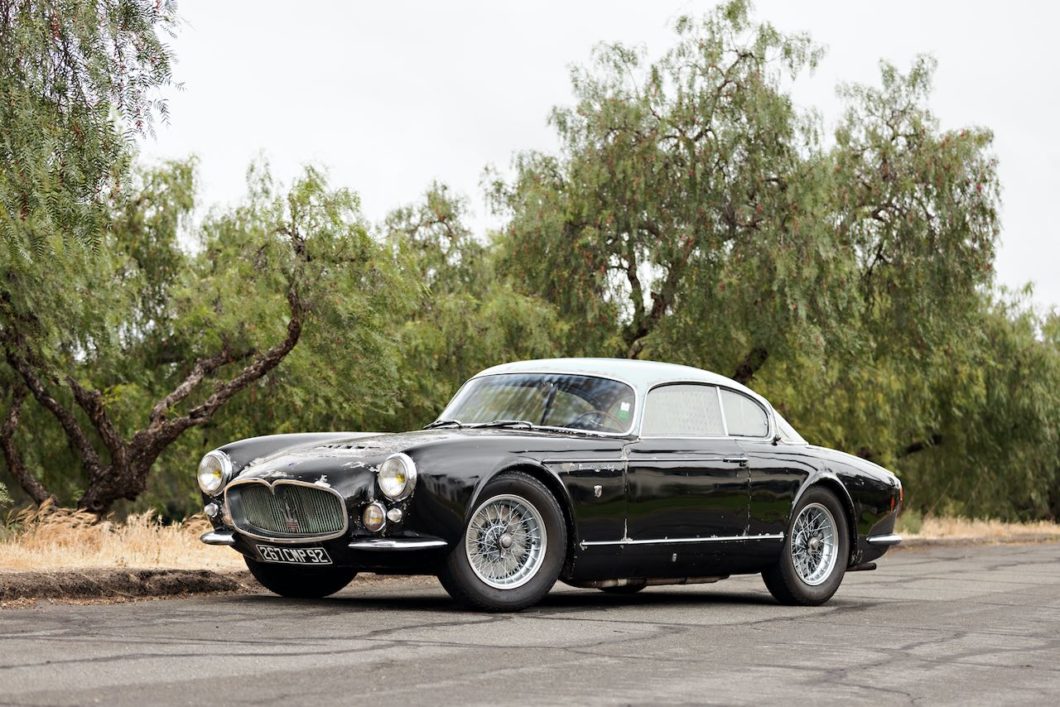 The ex Baillon Collection 1956 Maserati A6G Gran Sport, one of the last remaining original examples left in the world, is set for the Gooding and Company sale at 70th Anniversary Pebble Beach, which is taking place from 13th – 14th August.

When news of the Baillon Collection broke in December 2014, it caused a sensation around the world. Never before had such an incredible collection of rare coach built cars been brought to attention of the public. Many of the historically significant cars crafted by the finest coachbuilders, such as Amilcar’s, Delage’s, Delahaye’s, Ferrari’s, Panhards, Talbot Lago’s and Voisins, were in a sorry state of repair and some were held together by decades of dust and rust. But behind the doors of one barn in the grounds of a French chateau, sat along side a 1951 Ferrari 250 GT SWB California Spider, resided another Italian gem that waited to be woken from its decades long slumber. And that car was the beautiful 1956 Maserati A6G Gran Sport.

Fast forward six years and the Baillon Collection Maserati A6G Gran Sport is back on the market with Gooding and Company and carries an estimate of $2,500,000 – $3,250,000. This particular car, chassis 2140, is one of only 4 examples coach built by Carrozzeria Frua.

It was displayed on the Maserati stand at the 1956 Paris Motor Show and was first sold to noted French architect Jacques Fildier. In 1959 it was then acquired by industrialist Roger Baillon, who added it to his growing collection of exquisite and rare cars, which eventually ran into the many hundreds. His ultimate dream was to build a museum on his estate to house his collection. That dream however failed to become a reality when his business empire collapsed in 1978. Over the years a number of cars were sold off by liquidators to settle debts, eventually leaving 95 cars untouched in the grounds of the estate. The Maserati, along with the surviving collection would remain on the Baillon family estate and would not be re-discovered until 2014.

Since its return to the fold, and following a sympathetic mechanical re-commissioning, the Maserati A6G Gran Sport has been shown on the international concours circuit and in 2017 is was displayed at the Concours of Elegance at Hampton Court Palace, where it was shown for the very first time.

It was remarkable to see this very famous Maserati drive round the grounds of the palace, its owners having gone to great lengths to preserve the car in as found condition. It even took part in the 300 mile Wessex Tour, which took place in the build up to the Concours of Elegance.

Out of all of the cars to emerge from the Baillon Collection, the Maserati A6G Gran Sport is perhaps the most special. This is due to its extremely low build number, its elegant Frua coachwork and of course the delightful patina acquired over many decades. A car is only original once and while the temptation for some would be to put this Maserati through an extensive ground up restoration, the fact this is one of the only un-restored, original examples left is remarkable.

This 1956 Maserati A6G Gran Sport will always be known as the “Baillon Maserati” and it is set to continue its journey when it crosses the Gooding and Company auction block at Pebble Beach later in August.

More details on this significant Maserati can be found on the Gooding and Company website.