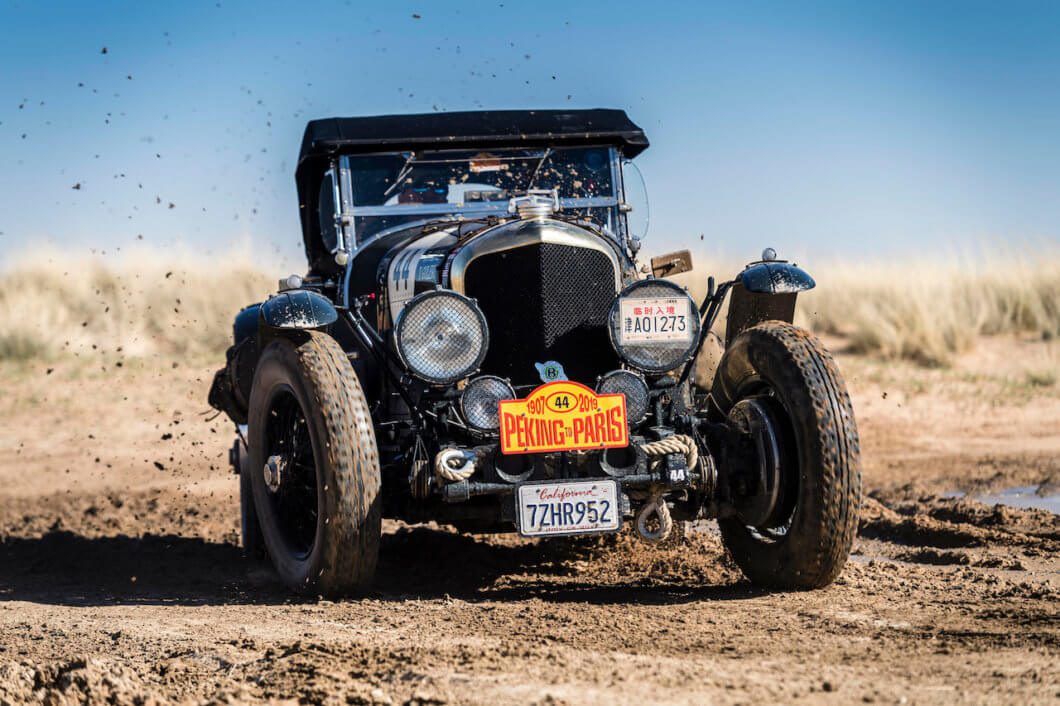 104 cars made it into Ulaan Baatar, Mongolia after a four-day 1744-kilometer haul from Peking across the wilderness of open pasture then rocky sections into Mongolia and the Gobi Desert. Most realised they had only just scratched the surface of the tough 13,840-kilometer route to Paris and the finish on July 7.
After surviving sand storms, choking dust and dodging flash floods, crews took advantage of a well-earned rest day in Ulaan Baatar on June 6th to try and refresh themselves and fix battered cars in some cases. Others with their cars still in great condition had a chance to see some of the sights in the ancient city.

The cars are divided into two categories, vintage pre 1941 and classic up to 1975. The vehicles, including a 1907 three wheeled Contal Mototri trike, have all been specially prepared to take on the rigours of such an epic and at times hazardous motoring adventure. Once the teams arrive at the next night halt, many go straight to work on their cars. Knowing what could lie ahead, nobody wants to leave anything to chance.

Boris and Eliot Gruzman (USA) were stuck out in the wilderness. They hadn’t made camp on Tuesday night after bogging down in sand somewhere off rally route, so father and son had to spend a cold desert night awaiting rescue with the big silver 1965 E-Type Jaguar. Salvation arrived soon after breakfast when an organization Hilux truck to pull the big cat and its occupants free from the mire.

Once they’d left the vicinity of the Inkhet camp on Wednesday, the event was pitched straight into the Time Control sections which would define the day. Organizers devised a fast but realistically paced cross country route which required major input from the navigator to keep the car on the right schedule and the right road. There was no tarmac for 250km.

It was a tough day though and consequently along the route, there were several breakdowns, some serious.  Rene Backx (B) and Jef Augustyns (B) lost the throttle linkage from their 1931 Bentley Speed 8 but found a pair of willing helpers in the form of fellow Bentley drivers and Belgians Jean Vincent and Marcel Peumans who lost two hours of time for their troubles.

Pete Zimmerman and Jonathan Newhall’s Buick Coupe ended the day on a truck headed for a workshop in Ulaan Bataar for some remedial welding work after the rear suspension mounts failed. And, a mere 5km down the road the pretty little Fiat 124 Spider of Enrico Paggi and Federica Mascetti sat waiting patiently for some assistance to fit new dampers.

No matter how hard the rallying is there’s always time for a bit of horse play, as Renee Brinkerhoff (USA) proved when a local allowed her to ride his sturdy little pony over the steppe whilst her navigator, Calvin Cooledge sensibly sat in the car keeping an eye on the time.

Nick Grewal (USA) and Dirk Burrowes (USA) were not so lucky as their 1940 Packard 110 Deluxe lost a rear wheel which in turn caused a ruptured brake pipe. This meant two lengthy stops to first repair the wheel and replace the studs and then, once they’d realised that the brakes were affected, to repair the hydraulic line. The New Zealand crew of Heather and Joanne Worth, whose Volvo had run out of fuel shortly before a filling station, stepped up and offered some brake fluid in the true spirit of the event.

Heavy traffic on the run into Ulaan Bataar on Wednesday evening certainly didn’t suit Mich Gross and Christopher Rolph’s 1910 White MM Pullman steam car but the Americans were seen chuffing steadily along the highway. On arrival, various garages dotted around the city have been helping competitors fettle their cars.

Ludovic Bois (F) who is navigated by Julia Colman (GB), was somewhat downcast. His 1973 Peugeot 504 has mysterious intermittent electrical issues, “with mechanical issues you can see them and repair them, with electrics – it could be anything and it’s so frustrating”. After finishing on the podium in 2016, Ludovic wants to get this problem sorted as soon as possible.

Keith and Norah Ashworth (GB) was were trying to sort problems with sooty spark plugs on their 1928 Bentley Le Mans. Keith thought it could be “down to low quality fuel”.

Jim Gately (USA) was “paying the price of the fun he was having yesterday” trying to repair his steering knuckle joint. Annoyingly he has half a dozen of them lying around the workshop at home. Meanwhile his navigator Tony Brooks (GB), his right foot in a plastic cast after an accident on the Flying Scotsman last month, has guided his driver to 11th overall so far despite discomfort.

Scott and Chance Pereklis (USA) were simply checking and cleaning their Ford, Scott; “There’s nothing wrong with it and we’re having a great time”. They decided to enter the rally after seeing the Peking Paris 2016 pull into the Place Vendome finish. Three years later they were in the thick of it in Ulaan Bataar.
Americans Shivinder Sikand and navigator Dean Drako got up early to go into the auto market and bought two bearings. After half shaft failure in his ex-Philip Young (the originator of the Endurance Rally Association) Peugeot 504, Shivinder thinks that this might be “the best $8.00 I’ve spent”.

By the time the evening came around, most of the crews were sorted out and their cars were clean and fit for battle once again as the event restarts from Sukhbataar Square at 0900 local time Friday 7th June.

Peking Paris teams and organisers were delighted to welcome Dutchman Johan Gitsels and Belgian Walter Op’t Roodt back with them after their trip to hospital last night following an accident in their 1973 Porsche 911T. Whilst they’re both in great spirits the car is not in great shape and is being sent back to Europe. Johan takes up the story;

“We keep smiling. Yesterday we badly damaged the car in the middle of the Gobi Desert when overtaking another competitor, we crossed a deep track which caused us to have multiple rollovers. Walter, my navigator is fine, I have some stitches in my ear and a broken left arm. Our medics and the teams from two hospitals did a wonderful job. We are looking into whether we can pick up on the rally later on.”