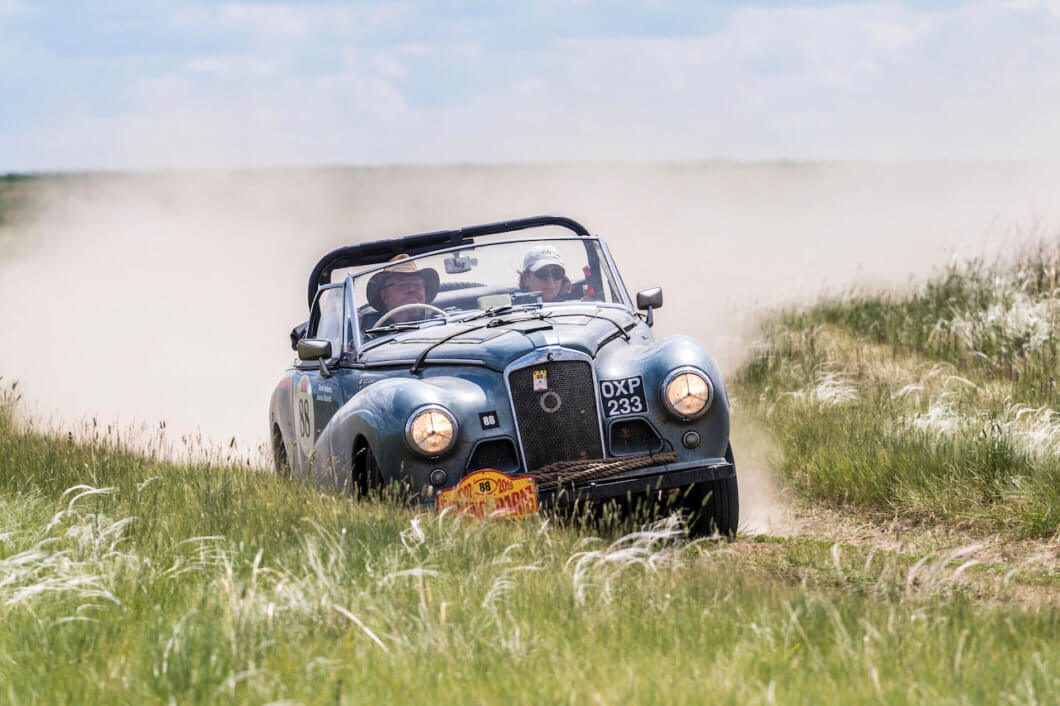 It is hard to believe that 19 days into the Peking to Paris Rally, the teams have only just reached the halfway point. But as the crews passed over the Ural river they started down the other side of the mountain, so to speak, and crossed the border into Europe for the first time.

Australians Gerry Crown and Matt Bryson still lead the classic field in their Leyland P76, but only by a minute and thirty seconds from nearest challengers Americans Chris and Tjerk Bury in the Datsun 240Z. Whilst they might be at the head of things, they have suffered the same challenges as the rest of the field, navigator Matt Bryson had this to say about the savage dust experienced whilst on the road, “The dust cloaks everything and absolutely fills the inside of the car, we are spending our rest days trying to get it out”.

Of course, many competitors were spending their few rest days tackling much more pressing problems, created by the rough ‘roads’ experienced along the route. The crews had described the roads for the last few days as both ‘unbelievable’ as well as in some cases, in the words of British navigator Tony Brooks, “almost undriveable and dangerous if you aren’t careful”.

The #96 car of Germans Daniel Ehrlicher and Florian Lissmann had lost a wheel and damaged a brake disc whilst Frenchman Ludovic Bois’s Peugeot 504 was suffering alternator and electrical problems, but for Belgians Wim Van Gierdegom and Arne Van Collie in their 1927 Chrysler 70 Roadster, troubles were more stifling.

Shortly after describing their joy at being back on the road after their latest technical hitch, they ran into further problems shortly after leaving Ulaanbaatar. “We have a big oil leak” said Wim, “we will have to return to a garage in Ulaanbaatar to fix it, which will likely put us 24 hours behind the rally, but we will drive all day to catch up!!”

The attitude of the Belgian crew says much about the spirit of the rally itself, echoing the thoughts of German navigator Roman Verhaelen, who described the community of the event, “It’s like a big family, everyone helps each other out in whatever way they can”. This community spirit has been tremendously important as the teams have navigated their way through the tough and uncompromising roads of Asia and many will understand navigator and British driver Bill Cleyndert’s words that the first time he competed in this challenge it was “lifechanging”.

Bill is navigating in the vintage category this time round, currently sitting in second behind leaders Graham and Marina Goodwin’s 1925 Bentley but ahead of one-time class leader Keith Ashworth. “We were leading in class” says Keith, “We have dropped down a few places, but the car is going well.

Perhaps it is due to our mascot that we have taped to the bonnet, a photograph of the man who originally bought the car in 1926. I found his photograph on the internet and now we take him with us everywhere we go; it’s nice to have him come along on this adventure with us.”

An adventure it is and despite now being on less remote soil, there is still a very long way to go, with much of Russia still to pass through. What is certain is that there will be more challenges, more mechanicals and more displays of incredible team spirit as the challenge thunders on. “We have two goals, to reach the finish and to get there with the marriage intact”, joked Swiss Michael Merkle as he patted the roof of his 1971 Mercedes Benz SL350. For most, just crossing the finish line in Paris on July 7th will be a major cause for celebration!