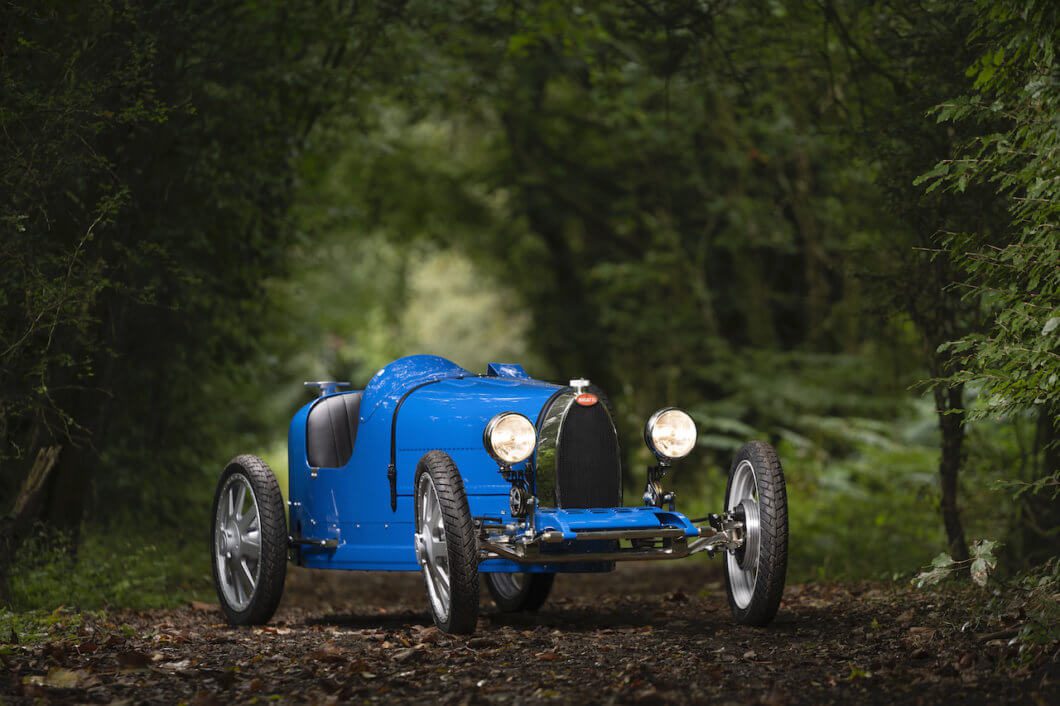 For the celebration of the 110th anniversary of Bugatti, a very special surprise was prepared for the enthusiasts of La Marque: the unveiling of the first Bugatti Baby II prototype. Earlier this year, at the 2019 Geneva Motor Show, Bugatti had revealed the re-imagining of the iconic Bugatti Baby as a 3D printed model. It captured the imagination of automotive enthusiasts around the world, and the limited edition run of 500 cars sold out completely within three weeks.

“When a company with such a colourful and proud history as Bugatti turns 110, you can allow yourself to look into the rear view mirror a little bit more than you usually would. Thus, it is only fitting for our anniversary year to revive the Bugatti Baby”, explained Stephan Winkelmann, President of Bugatti. “The Bugatti Baby II has grown up to be more of a teenager now, and I must say I’m very excited to see it drive around on the Bugatti premises in Molsheim.”

To design the Baby II, Bugatti has partnered with The Little Car Company to produce the greatest junior car ever created. After months of development, the Bugatti Baby II has now reached the point where the first prototype, named XP1 was ready for test drives by VIPs at La Grande Fête in Molsheim.

Based on the iconic Bugatti Type 35, the Baby II combines the playfulness of the original Baby, re-imagined with 21st century technology. Ben Hedley, CEO of the Little Car Company said: “It’s been a huge honour to be involved in this project with Bugatti. The Baby is a key part of Bugatti’s heritage, and we wanted to create something which is deserving of the name.”

“We set out to design something which was respectful of the original but also great fun to drive, and the early feedback from customers tells us we’ve achieved that.”

The first stage for the Baby II engineering team was to digitally scan every single component of a 1924 Type 35 Lyon Grand Prix car. From there the designers adapted Ettore Bugatti’s masterpiece, introducing a modern electric powertrain with lithium ion batteries and regenerative braking. Other elements were gently redesigned for the modern age.

In the cockpit, the classic four spoke steering wheel sits in front of a turned aluminium dash with custom Bugatti instruments. While the original cars had a tachometer with oil and fuel pressure gauges, these have been replaced with a speedometer, battery level indicator and power gauge (first seen on the Veyron). The clock used for measuring race performance in the Type 35 remains.

The fuel pressure pump from the Type 35 has been digitally replicated and repurposed as a forward / reverse control, and all cars will come with a horn, rear view mirror, handbrake, headlights and a remote control to disable the car from up to 50 meters should an inexperienced driver get carried away. Sat proudly in the centre of the dashboard is a plaque giving the unique chassis number of the Baby II, and displayed on the nose of every car will be Bugatti’s famous ‘Macaron’ badge, made of 50g of solid silver, just like the Chiron.

The Baby II has been designed to be fun to drive from the start. The rear wheel drive powertrain comes with two selectable power modes for drivers of different experience: a 1kW ‘child mode’ with the top speed limited to 20 km/h, and a 4kW ‘adult mode’ with the top speed limited to 45 km/h. In addition, for those enthusiasts who crave even more pace, some versions come with a ‘Speed Key’ just like its big brother, the Chiron, which allows power of up to 10kW and disengages the speed limiter. Fortunately there is a Limited Slip Differential to help drivers make the most of the torque available at the rear wheels.

The car will come with two sizes of removable battery, a standard 1.4 kWh pack and a long-range 2.8 kWh version. While exact range will depend on driving style, the larger pack is expected to give a range of more than 30km.

The Baby II will come in three specifications:

Each Baby II is 2.8m long and 1.0m wide. The exact weight of the car will depend on the version, but starts at around 230kg without driver.

Whilst all 500 Bugatti Baby IIs sold out within three weeks of the Geneva Motor Show announcement, it is still possible for customers to join the reserve list should a prospective buyer pull out, or to get the first notification of any future models. For more details, please visit www.bugattibaby.com.

Prices start at 30,000 euros (plus taxes and delivery) and production starts at the beginning of 2020. The car will be manufactured by the Little Car Company in the UK, and all 500 cars will be produced over the course of 2020 and 2021.