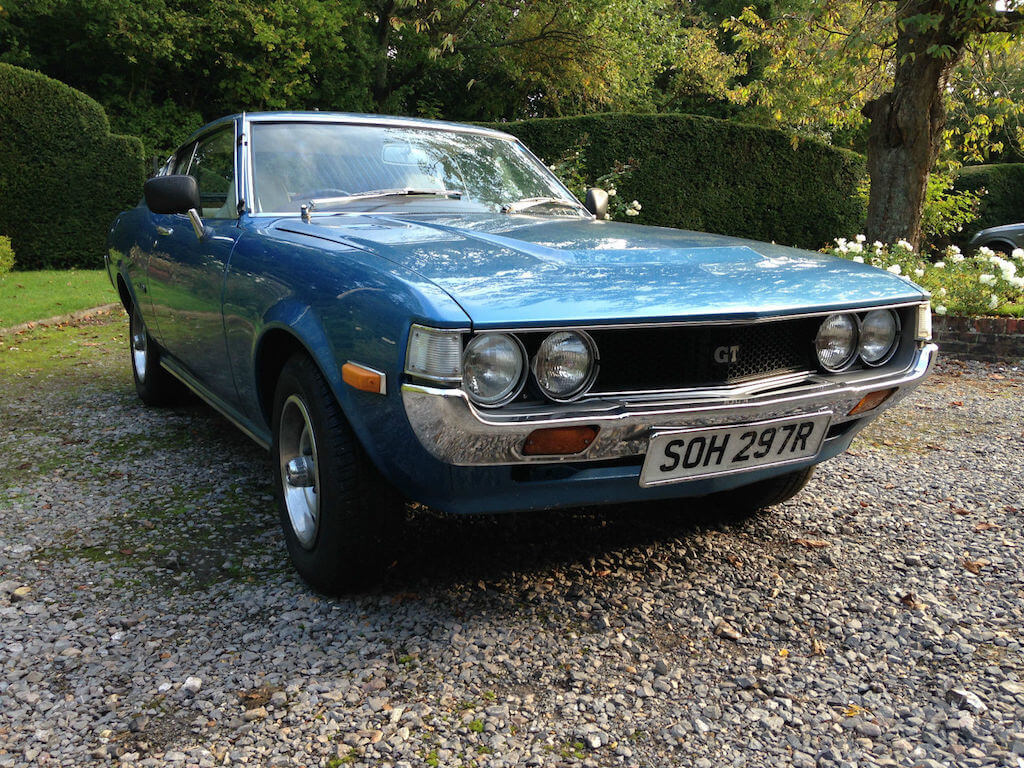 The 1970s witnessed the rise of the Japanese car industry. Leading the charge on western car makers was Toyota. Keen to make their cars appeal in new markets, Toyota’s designers took inspiration from their western rivals, applying their own style. One such model that would have a lasting impact was the Toyota Celica GT. Launched at the Tokyo Motor Show in 1970, the new Celica was based around the Toyota Carina platform and was essentially a 2 door version of the Carina saloon. It debuted first as a pillarless coupe which was updated to the lift back coupe style in 1971. The coupe and the lift back styling took their cues from the Ford Mustang which resulted in strong sales in the US. Power was provided by Toyota’s R-series four cylinder engines with multiple sizes on offer from 1.4ltr all the way up to 2.2ltr. Power ranged from 102BHP for the 1.6ltr engine to 135BHP for the Yamaha head, twin cam 2.0ltr. The twin Solex carb 8 valve 18R-GU engine was fitted to the Celica 2000 GT which was exported from 1976. A five speed transmission was standard with power sent to the rear wheels.

Build quality was light years ahead of western cars with the Celica being the first Japanese car to be built on a robotic assembly line. Added to this was Toyota’s reputation for quality, though rust was ultimately the killer for most Celica’s of that era. Despite the success of the Toyota Celica in Japan and the US (today’s example – 2016 Toyota Sequoia), the first generation model failed to take hold in the UK, though its popularity grew with later generation models.

We have come across a very rare 1976 Toyota Celica 2000 GT Liftback for sale. Said to have been owned by a Toyota Dealer Principle from new, it has covered just 35,000. Owned by the dealership Managing Director for 38 years, the car is described as being in good condition and comes with a detailed history file of all works carried out by the dealership workshop. It was resprayed in 2002 with the repaint described as being good but was not done to a high standard. It has also picked up a scratch on one wing while in storage.

The current and 3rd owner has carried out a long list of repairs and maintenance which has included a new custom made stainless steel exhaust, rebuilt carbs, new timing chain and tensioners and new belts and hoses. The front grill has been repainted its correct colour. The interior is described as being clean and original and has been fitted with a new headlining. The dashboard has some cracks but these as said to be out of view. The carpets are present and intact with some colour fading. The seller notes that the toolkit is present and that the boot carpet is a little worn. Some minor welding has also been done underneath and the underside resealed. A selection of parts and spares are also included with the sale.

This is one of the nicest Toyota Celica 2000 GT Liftback’s we’ve seen for quite a while. And as its a 2000 GT it is very rare, making it even more desirable. We’ve always had a thing for 1970s Japanese GT cars. They look very sporty and the mix of American and Japanese styling in the Celica 2000 GT works very well. One look at this car shows that it was squarely aimed at the US market.

The body moulded chrome front bumper and twin headlights add a touch of Mopar to the front end. The lines of the liftback side profile is easily comparable to the Ford Mustang Fastback, in particular the detailing behind the rear quarter light windows. And moving to the rear the homage to the Pony Mustang is rather blatant with the 3 segment molding and tail light arrangement. It was all very deliberate but done very well.

On the inside the interior looks very good indeed. The seller does note a small burn on the drivers seat and recommends replacing the centre console panel. Apart from that it looks very well preserved indeed. The rear seats appear to be very clean as well.

The engine appears to be running its original twin carb setup which shows that this example hasn’t been messed with. The bay could do with some detailing and a repaint of some items. It was good to read that the bay itself wasn’t repainted in 2002 and retains its factory badges, stickers and original paint. Personally we’d just clean it up and repaint the radiator cowl, airbox and head, as the seller suggests. The rest we’d leave original.

We can’t remember the last time we came across a Toyota Celica 2000 GT Liftback in as good and original condition as this. The seller has been very honest in his listing and while it is not a concours example, it is a unmolested survivor with genuine low mileage that could be left as is or brought up to concours standards. While the 2000 GT lacks the big V8 of its American inspirers, it was noted for being a very quick car with excellent handling. Personally if we were buying this car we’d be torn between keeping it as is and driving it, or restoring it to concours standard. Given its rarity on UK roads, whatever the prospective owners plans are, this Toyota Celica 2000 GT Liftback sure is a keeper.

This Toyota Celica 2000 GT Liftback is located in Henley-on-Thames and has an asking price of £14,995 which is open to offers.