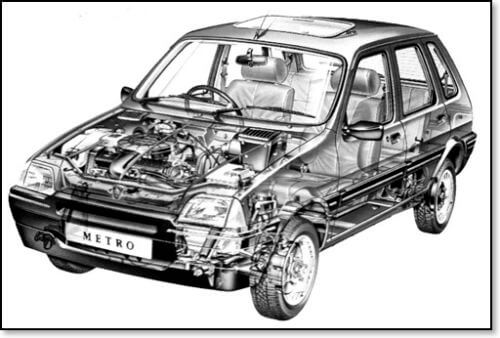 Fancy owning a bit of Rover history? This has to be one of the most unusual eBay auctions we have ever seen and featured to date. Offered for sale are the original blueprints for the design and production of the Austin Metro, the Rover Metro and the Rover 100. Judging by the photos there is literally a mountain of paper work, which the seller claims is just a fraction of the entire collection. The collection includes the following:

Also included in the sale are a large number of blueprint cabinets, a microfiche reader, microfiche scanner and a collection of fax machines, printers and apparently the entire phone system from the design office. Sounds a very comprehensive collection indeed!

When MG Rover and its assets was purchased in 2005 by Chinese car manufacturer Nanjing, one would have assumed that most of its historical records were either disposed of or simply kept as part of Rovers assets handover. However it looks like a specific chunk of Rovers design and engineering archive has made its way into the hands of the current seller.

While the plans on offer are not those for the Lamborghini Miura or anything as exotic as that, they are still a fascinating insight into the entire design and production of the Rover Metro. It was one of the most important small cars ever built in the UK, providing cheap and cheerful motoring for the masses. T

With many old Metro’s now scrapped, their numbers are in decline. Sourcing rust free body panels is not an easy task so why not refer to the actual blueprints to produce new ones? It could be the next Dragons Den pitch! It is also interesting to note that the seller mentions the collection contains details on the Metro Turbo. This probably refers to the MG Metro 6R4, which was an impressive but flawed Group B Rally Car. If true these could provide an interesting insight into the development of this car.

With the disastrous collapse of MG Rover, this very unique collection really belongs in a museum. With over two million Austin/MG/Rover Metro’s built over a period of twenty years, it was one of the UK’s best selling small cars. This sale represents a unique opportunity to own a piece of Rover Metro and Longbridge history.

The collection is located in Birmingham in the West Midlands with a current bid of £265 and six days remaining.

See our Market Pick for an early 1970 Land Rover

Check out Take to the Roads Highlights of the 6R4.net Track Day at Curborough Sprint Course