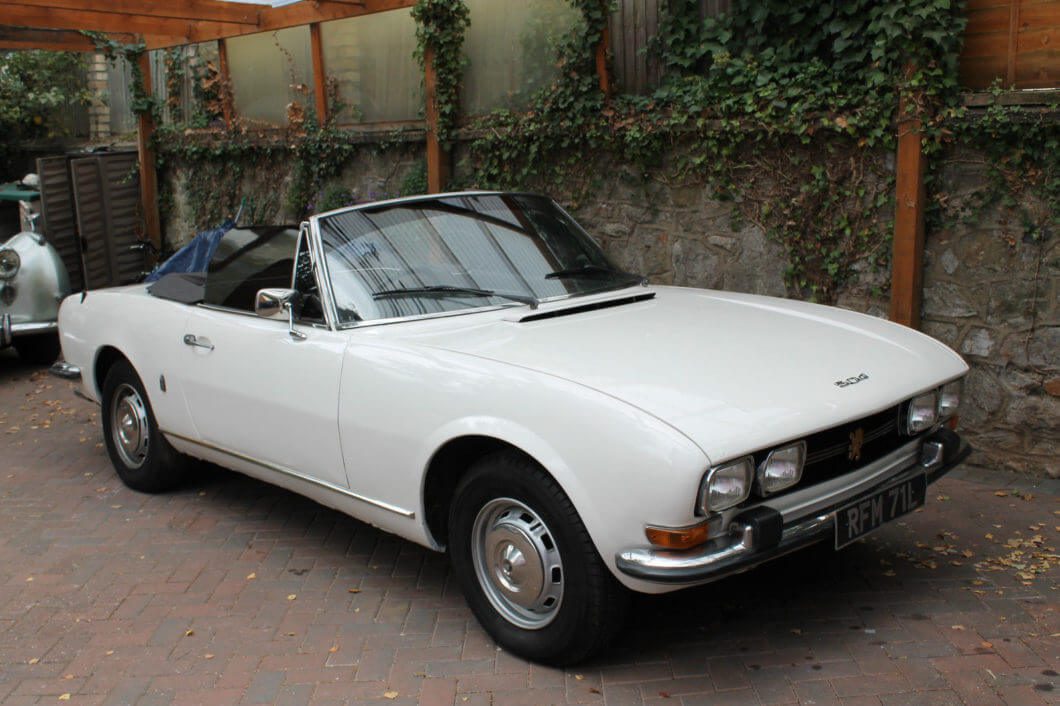 Launched in 1969 at the Salon de Geneva, the Peugeot 504 Cabriolet was the pinnacle of the French marques designs in the late 1960s. Styled by Pininfarina, it was based on the Peugeot 504 saloon. The elegant cabriolet was powered by a 1796cc four cylinder, fuel injected engine which produced 97BHP. Power was sent to the rear wheels by a column mounted four speed transmission with a three speed automatic also available. The 504 was noted for its soft suspension which consisted of MacPherson struts and coil springs up front, with semi-trailing arms with coil springs at the rear. Disc brakes were also fitted on the front with drums on the rear.

In 1970 the engine was upgraded to 1971cc which boosted power to 104BHP in fuel injected form. However, the grand tourer was still considered by some to be a slow car. In response to these criticisms, Peugeot introduced the new 2664cc V6 engine. Developed in collaboration with Renault and Volvo, the new aluminium block straight six produced 136BHP and featured a twin carb system that utilised different carburettor types. The elegant grand tourer had finally gotten the engine it deserved. Just over 8,000 were produced by the time production officially ended in 1983.

We have spotted for sale a rare 1973 Peugeot 504 Cabriolet. This right hand drive example is described as being in good condition and has been off the road since 2009 (judging by its last MOT). The paintwork and chrome are said to be very good and the hood is in excellent order. The brown leather seats are also described as being good with minimal wear with the carpets showing no sign of wear. The seller notes that the glove box latch is missing. The car starts and drives but needs a service and will require welding to the underside. Mileage is stated as being 46,367 and the car comes with its V5 document, stamped service booklet, owners manual, some bills and old MOTs.

There is just something about Peugeot cars from the late 1960s and early 1970s. They have a style and class that sadly eluded them in later years. The Peugeot 504 Cabriolet is probably one of the best examples a successful Franco-Italian automotive collaboration. The 504 Coupe, also penned by Pininfarina was equally good looking and even the diminutive and compact 204/304 Cabriolet had an elegant charm to it.

This particular 504 Cabriolet presents itself as a well preserved survivor. Peugeot cars of that era have a terrible reputation for rust and most have been lost to the dreaded tin worm. Survival rates for the cabriolet are thankfully higher, no doubt helped by its good looks and loyal following. The body work on this one appears sound in the photos and the white paint has a nice shine to it. The chrome work appears good and all the trim is present from what we can see.

The hood is also very good and the rear plastic window is clear and not cloudy. Moving on to the interior everything appears to be original and very well preserved. The brown leather looks great with some small bits of wear on the drivers bolster. A sympathetic clean and reconnolise would bring them back up nicely. The carpets look like new too, as do the ones in the boot. The seller noted that the glove box lock is missing but it should be possible to track one down on eBay. There is also a hole visible in the drivers door card, with one mirrored on the passengers door. These might be for the window winders but its hard to tell. Electric windows were available on the 504 range and the centre switch above the arm wrest is probably for the windows.

The engine in this one is the 1971cc four cylinder so it is not the more desirable V6. The engine bay is looking a bit tired and some of the hoses will no doubt need replacing after sitting for a while. But a thorough service will attend to these. We suspect this one has the four speed gearbox as well.

As we mentioned earlier, Peugeot’s of this era like to rust so we would want to give this one a very thorough examination. Replacement panels are hard to source for these. The seller did state that it does require some welding underneath but hasn’t elaborated on what needs doing. As this one is a convertible we’d pay close attention to the sills as any body flex would suggest a weakness there. They can also rust in the wheel arches and water can get into the wings through the bonnet vent, if the drainage holes are blocked. But all these are the usual cautions one has to bear in mind with a classic car.

We think this one presents very nicely and appears to have been looked after by its previous owner and stored well. Its condition has also no doubt been helped by its low mileage (assuming it is genuine). We really like this Peugeot 504 Cabriolet and while it isn’t the more sought after V6 model, it is still a gorgeous convertible. The quad headlights and the lines of the bonnet with the slight higher rear quarter are just gorgeous. All very simple and perfectly proportioned. It is another stunningly elegant design from Pininfarina. Values for the Peugeot 504 cabriolet are high due to their rarity with the V6 obviously commanding more. Assuming the required welding isn’t too extensive, this one could be a very good investment indeed. We would recommission it, sort out the welding underneath and revive the seats. Then we’d just drive it. And what better mode of transport to cruise in on the way to your favourite French restaurant. C’est magnifique!

This Peugeot 504 Cabriolet is located in Newton Abbot, Devon and has an asking price of £15,995. The seller notes that the asking price includes an MOT.

More details along with additional photos can be found here on eBay.