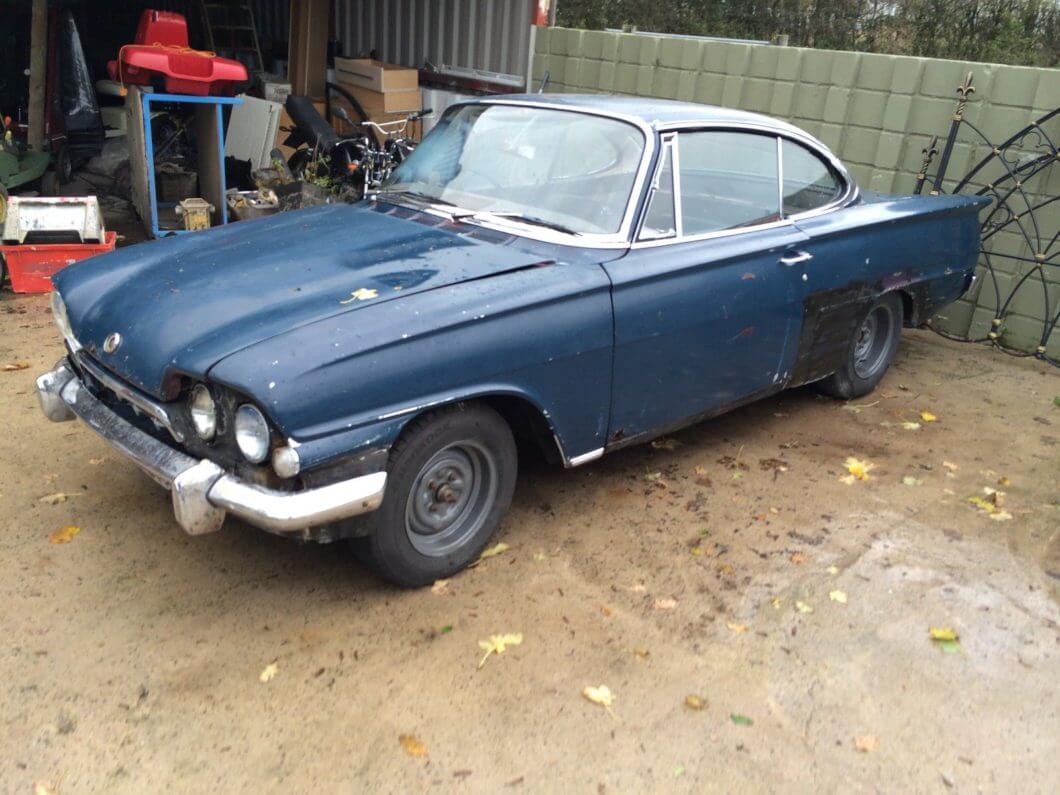 The Ford Consul Capri was launched in 1961 and was the first European market Ford to bear the Capri name. Designed by Charles Thompson, the 2 door pillarless coupe was based on the Ford Consul Classic saloon. It’s design took cues from the Ford Galaxie and Ford Thunderbird and was an attempt to bring American style and flair to the UK market. The compact and stylish coupe debuted with a 1340cc engine which produced around 50BHP. A four speed transmission was offered as standard with an option for a column or floor mounted gear lever.

As the Consul Capri was a upmarket offering, it featured quad headlights, front disc brakes, variable speed wipers, dashboard light dimmer and a cigar lighter. Despite its sporting looks, the Consul Capri lacked performance which was partially addressed in 1962 with the introduction of the 1498cc engine. While this engine was an improvement over its sluggish predecessor, it wasn’t until the introduction of the Ford Consul Capri GT in 1963 that the coupe finally got the engine it deserved. The GT utilised the same 1498cc engine but this time with modifications from Cosworth. Using their tuning magic, Cosworth added a twin choke Weber carb, modified head with larger exhaust valves, higher compression ratio, aluminium inlet manifold and a four branch exhaust. These upgrades transformed the Consul Capri giving it 78BHP. However it came too late to save the coupe.

Due to high production costs (it was built across three factories) and the success of the new Ford Cortina, the Ford Consul Capri was dropped in 1963. Due to a short production run of just two years, only 19,000 were built, with the GT limited to just over 2000 units before the model was finally cancelled.

As rare projects go, this 1963 Ford Consul Capri is very interesting. Fitted with the improved 1498cc engine, it is in need of full restoration and was originally owned by the previous owner for 18 years. The seller states that the car was originally maroon and was later sprayed blue at some point in it’s life. The listing doesn’t provide much detail on the car itself with the seller stating the car needs to be viewed to get a better understanding of its condition. The seller adds that he can restore the car if the buyer requires.

Looking through the photos it is obvious this one needs a full strip down. The blue paint is very faded and scruffy and there is evidence of a rough patch repairs on the left rear wing, which seems to be mirrored on the opposite side. There is also a dent in the drivers door.

Most of the coupes chrome appears to be intact with the exception of the sill strips, which were probably lost when the sills were patched. But the bumpers, window trim and front grill are all there.

The engine bay looks very tired indeed but again everything appears to be there with the exception of the air cleaner. The fuel line hoses look new so it is possible that the engine runs, though the seller doesn’t mention if it does. It looks like a twin barrel carb has been fitted, which may be factory but it is hard to tell. One plus is that top strut mounts and wings actually look pretty clean. And of course the engine bay shows the cars original maroon colour.

On the inside the interior appears to be all there. The drivers seat is torn put the passengers is salvageable. Thankfully there is enough material left along with the door card trim so everything is there to template. The dashboard area is just a bit scruffy and looks worse due to the debris underneath it. However there’s no escaping the gaping hole in the passenger footwell. The removed back seat also shows evidence of rodents. The carpets look terrible and have clearly been holding water for some time, which isn’t a good sign.

Every so often we come across a car that catches our eye and we wonder why we haven’t seen one before. The Ford Consul Capri is a rare car which is why we haven’t come across one until now. Even though we aren’t the biggest Ford fans, we have to say we actually like this coupes styling. There are echoes of the Ford Galaxie 500 with the quad headlights and we actually think the sweeping roof line bears a striking resemblance to the Volvo P1800. And we particularly like the pillarless profile. It’s very cool.

As with most cars of that era,  the Consul Capri has a reputation for rust and as can be seen in the photos, it has holes in the floor and some rust on the door bottoms. And the previous owner clearly had some panels patched which were never finished. As the seller states this one isn’t going to be a weekend restoration job. No doubt a strip down could well reveal more hidden rust, especially where the rear wings have been patched. Who knows what lurks behind. As a result we’d want to give this one a thorough investigation. Mechanically, everything is going to need replacing or rebuilding. And parts for the coupe aren’t easy to come by due to its low production numbers. It’s not going to be cheap. However on the plus side it does have an MOT until March next year which does suggest it is road worthy.

Despite looking tired and scruffy, the Consul Capri is a rare car so it is definitely worth saving. Personally we’d return it to its original maroon and give the coupe a performance upgrade. A Ford Essex V6 would be an interesting choice or maybe even a new small block Ford V8 crate motor. And throw into the mix a new transmission, up-rated suspension and brakes and this coupe could fly. We’d also add some US period deep dish chrome hub wheels to complete the look. As the Consul Capri is rare we’d get the original engine and gearbox rebuilt as well in case a future owner wants to return the car to stock. Whatever path the new owner chooses, once the restoration is complete, they will own a very rare, stylish bit of Ford UK history. And it would make for an interesting choice over the later Ford Capri.

This Ford Consul Capri is located in Glossop, Derbyshire and has a starting bid of £3,500. The auction has no reserve.