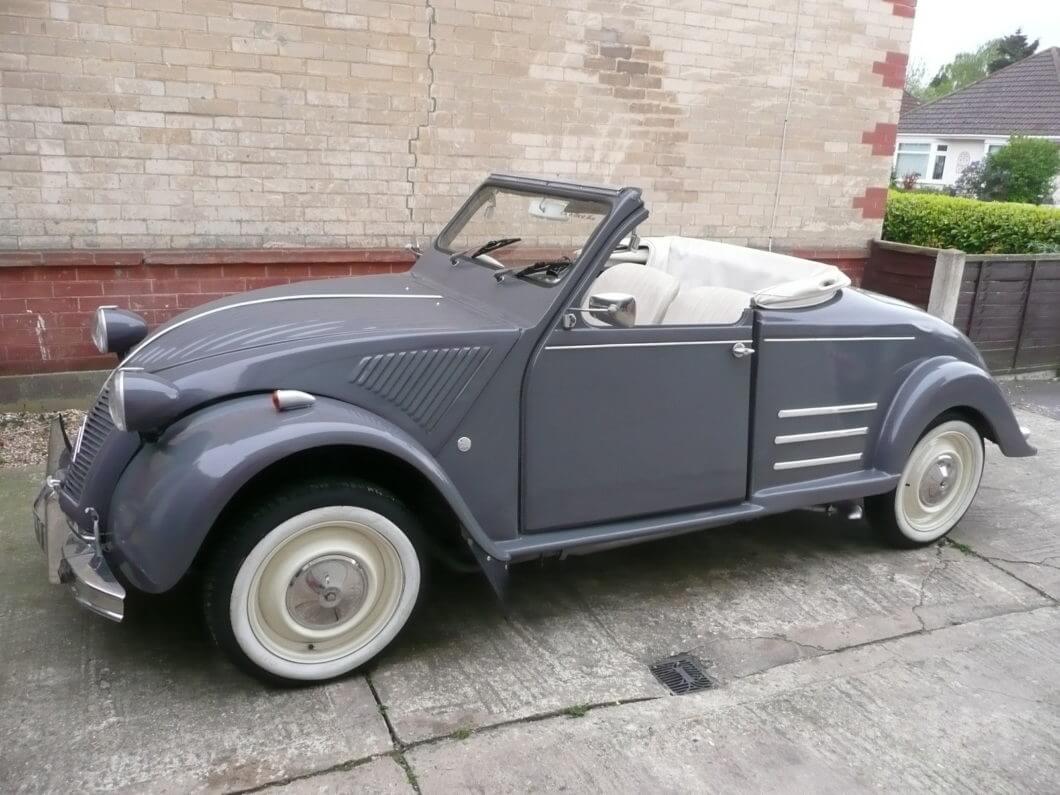 The Citroen 2CV was a revolution in cheap utilitarian motoring when it was unveiled to the French public in 1948. Where the Citroen DS stood for luxury and sophistication, the Citroen 2CV stood for completely the opposite. However to say that the 2CV wasn’t sophisticated isn’t particularly fair.

Commissioned by Pierre Boulanger in the 1930s, his brief determined that the new car, code named “Becassine”, had to carry two farmers in comfort, along with a sack of potatoes or a small barrel of wine, at a maximum speed of 60 km/hr. The suspension had to be capable of driving over rough ploughed ground and not break any eggs. It also had to use less than 3 litres of petrol to cover 100km. Some even managed to preserve their vehicle for quite some time, by using a car cover.

Citroen’s design team took on the challenge and ultimately produced the most innovative engineered utilitarian car of all time. The interconnected suspension allowed for an off road ability previously unheard of and was height adjustable. It also proved very comfortable and at the same time handled surprisingly well for a soft suspension.

The tiny air-cooled twin cylinder 9BHP engine was extremely robust though wasn’t noted for its speed. However speed was never the purpose of the 2CV. Although the Citroen 2CV was mocked by the press when it was launched at the Paris Salon in 1948, orders flooded in from a public desperate for cheap transport. The 2CV transformed the lives of Frances post war rural community but also proved a success with urban dwellers, who were eager for a compact city run about. Thanks to its rugged simplicity and quirky charm, the Citroen 2CV stayed in production for forty two years and over 3.8 million were built.

Offered for sale is a 1985 Citroen 2CV Hoffman Convertible. A rare conversion of a basic 2CV, the convertible is a kit developed by Wolfgang Hoffmann in 1988 (and is still available today). The kit comprises of a fibre glass reinforced plastic body with steel frame, side windows, convertible soft-top and trunk lid. The seller does not state when this particular 2CV was converted but notes it has been in long term ownership. It has been recently resprayed in period correct solid grey and has a white interior with a matching white steering wheel. The seller states it is mechanically good with the clutch and gearbox working well. It has recently been on a 90 mile trip without incident and has an MOT until 2016.

You have to hand it to Wolfgang Hoffmann for designing a convertible kit for the Citroen 2CV. While it already had a fold back roof making it more or less a convertible, creating a full convertible kit totally transforms its appearance. It takes an already charming and cute car and turns it into something ever cuter, whilst at the same time adding a dash of sophistication. Which is not what you expect with the no frills image of the 2CV. The solid grey paint and white trim work very well adding to what is a real header turner.

We assume the engine is a standard 2CV and we’d give the engine and its components some detailing to further enhance it. We’d also replace the carpet in the boot. But apart from those details it all looks very fresh and clean. Before making a purchase of what is essentially a kit car, we’d want to give this one a good check to make sure all is in order.

Assuming it is and with summer just around the corner, this little Citroen 2CV Hoffmann Convertible would make a great choice for those weekend drives and picnics. We particularly love the traditional corrugated bonnet and think it works well with the convertible look. And we think it looks fabulous with the top down. Its definitely one of the cutest head turners we’ve featured on Take to the Road to date.

This Citroen 2CV Hoffmann Convertible is located in Bournemouth, Dorset and the asking price is £10,500.