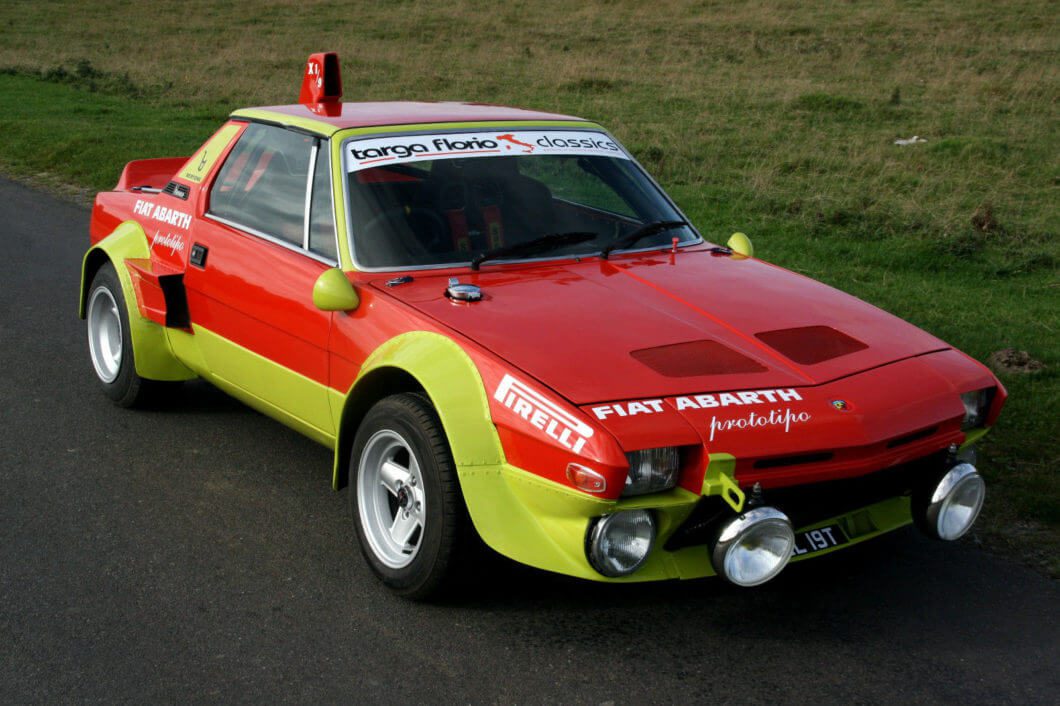 The striking homage to the original Fiat x1/9 Abarth Prototipo 2000 is once again up for sale. I am starting to think that this car is teasing me… tempting me to buy it. It is after all the ultimate Fiat x1/9 and a race car that should have had its day in the sun back in the 1970s… if it wasn’t for that pesky Lancia Stratos being so successful on the rally scene… But that is all history.

So this 175BHP recreation of the Fiat x1/9 Abarth Prototipo 2000 is available once again. It has a starting price of £25,000 with no reserve on the auction. It is a lot of money for an x1/9 and probably the most expensive around at the moment. And the price doesn’t even reflect the amount of time and money invested in getting it to this standard. It would make one hell of a track car and would be a guaranteed heading turning road car. It is crucial to keep your investment as safe and secure as possible. To find out more about how you can do that visit here.

More details on the sale can be found here.

The Fiat x1/9 Abarth Prototipo 2000 evocation is back on the market again with the same seller. I am are very surprised that this car hasn’t found a buyer yet. As evocations go, this is the ultimate for the Fiat x19 enthusiast and from studying the photos, it appears to be a very faithful recreation indeed.

Bidding on the last auction in February last year ended at £14,101 so we assume that sale must have fallen through.

The new auction is currently bid up to £9,800 with the reserve not met. I really hope this one finds a buyer. It deserves to be out there on track days and hill climb events.  I know I would be doing exactly that if we owned this beast!

More details on this Fiat x19 Abarth Prototipo 2000 evocation can be found here on eBay.

The Fiat x19 is now an auction with the opening bid at £9,900 and reserve not met. Link to new listing.

Our latest Market Pick is a rather impress and faithful looking reproduction of a Fiat x1/9 Abarth Prototipo 2000. The original car was born out of Fiat’s desire to enter the international rally scene in 1969 which eventually lead to Fiat works driver Gino Macaluso developing a strategy for a X1/9 Abarth in the early 1970s. While it was badged a “2000” the Prototipo actually used a 1,840cc engine which originated from the Fiat 124 Spider and was mated to a Lancia Beta 5 speed box. An Abarth designed 16 valve head and twin Weber carbs helped produce between 190 and 210 BHP. The whole package weighed a very light 750kg! Debuting in 1973 the car had mixed results failing to win/withdrawing in two rallies before winning two in 1974. The car had great potential but Fiat management decided put it’s weight behind their 131 saloon and the Lancia Stratos which was proving to be a huge success. And so ended the X1/9’s brief foray into the rally scene.

The X1/9 offered on eBay is described as being a rare series 1 model from 1978 which was used for rallying in the 1990s. The bodywork appears to be a very faithful recreation of the original Prototipo and looks to have the correct Abarth livery. The paint work is fresh and clean and the colours really suits it. We love the rear snorkel which is actually a very necessary addition and was used on the original rally cars. Due to the mid engine design of the X1/9, the engine bay is quite small and the side air vents have a tendency to not pull in enough cooling air. So the designers came up with a revised boot lid incorporating an air snorkel to force more air into the engine bay. It’s definitely a talking point!

The rest of the build is an impressive read. With a Lancia 2.0 twin cam engine that is said to produce 175BHP, this thing should fly! It sounds like it has been well thought out and given the right mods. The X1/9 in standard build is an excellent handling car, so the upgrades made to the suspension are interesting. Adjustable LEDA Coilovers are a nice touch and it is good to see that extra strengthening has been added to the suspension turrets. While the original X1/9 body shell is actually very strong, this extra support is welcome especially with the big increase in power being pushed through the suspension (the original 1.5ltr models produced 85BHP). The brakes have been upgraded too which is welcomed as the standard discs wouldn’t cope with the extra power.

The interior also looks to have been well thought out. We like the long gear shift which should perform better than the standard X1/9 arrangement, which was the standard cars main weakness. These cars are quite cramped as standard, so removal of trim and changes to the dash may have freed up a few centimeters of space inside which would be welcomed.

We really love the attention to detail on this Fiat x19 Abarth Prototipo 2000. A lot of work has gone into this build and it just looks great. It has everything really, great stance, ace wheels, a Lancia engine that loves to rev and superb handling. We’d love to take this one rallying for sure! And the fact it has it’s FIA papers and competition log book means this one is ready to go.

More details can be found here on eBay UK which includes links to more photos and a really good video which gives you a taster of what it is like to drive.