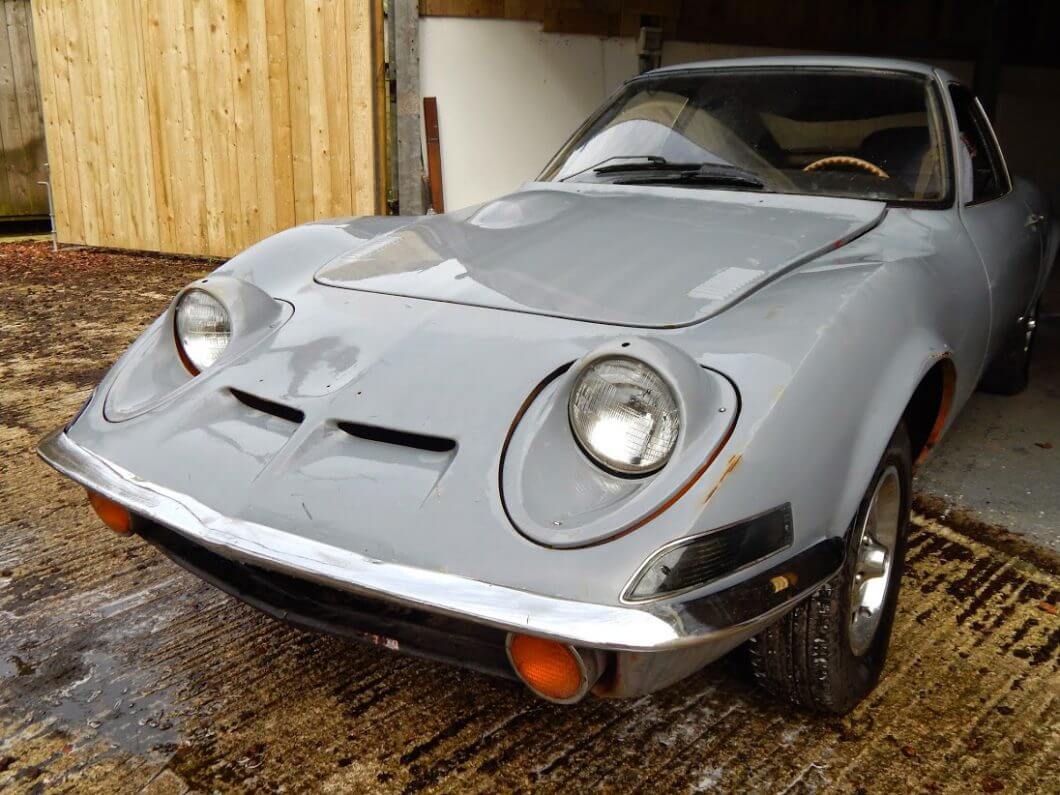 The Opel GT was launched in 1968 and was the German manufacturers first attempt at making a modern sports car. Designed by Erhard Schnell, the Opel GTs body was made by French coach builder Brissonneau & Lotz which fitted with Opel Kadett B chassis mechanicals. Power was supplied by a 1078cc over head valve four cylinder engine which produced 67BHP. A much larger 1897cc engine was also offered which produced 102BHP, which proved the most popular choice. A four speed transmission was standard with a Strasbourg three speed automatic offered with the larger engine.

As the Opel GT shared much of its mechanics with the Kadett, its was fitted with a transverse leaf front suspension and a coil sprung live axle on the rear. Disc brakes were added on the front and drums on the rear. The slippery body was fitted with manually operated pop-up headlights which was operated by a long lever in the cabin. The cars sweeping fastback design lacked a rear boot lid which meant access to the rear parcel shelf was restricted through the front. This made the GT less attractive as a long distance grand tourer. By the time production of the Corvette lookalike came to an end in 1973, over 100,000 had been built with over 70,000 or so heading to North America.

We have spotted for sale a 1970 Opel GT that is offered as a restoration project. It is said to be a California sourced car and is described as 99% rust free. The seller states that work was started on the body which is now in primer. The bodywork is described as being very good with the only rust located in the battery tray area. This one has the 1.9ltr engine which is currently not running but the seller will be working on getting it going. The interior, wiring and brakes also require attention. The listing also notes the car is complete and comes with its wheel trims and centres, both front and rear bumpers and its badges.

The Opel GT is a rare gem from the German makers automotive past. It is probably the most striking and beautiful car they have ever made. And as Opel was/is part of the GM group, it is hardly surprising that the little fastback bears more than a striking resemblance to the Chevrolet Corvette Stingray, which launched a year after the GT. It really is a wonderful example of the fastback GT class designs of the late 1960s, with its long bonnet up front and seductive curves. It is also a very simple design to look at with a minimum amount of fuss and chrome, which helped greatly with the aerodynamics.

With this GT, it is a restoration project that deserves a full strip down and rebuild. The photos suggest that the bodywork is pretty straight with little bits of primer wear on the left side wing. As a California car it should be rust free but a detailed check would be wise. A leaking battery can happen on any car and a rusting tray is not a major headache, assuming it hasn’t done too much damage. And as the seller notes, replacements are available.

The interior does look tired but the seats appear to be intact and might respond well to a good clean. The dash pad carpet appears to be masking a cracked dashboard, which is hardly surprising for a California sourced car. Replacements are hard to come by but plastic or vinyl stitched over dash covers are available from the US which can help as replacement parts are scarce.

The 1.9ltr engine block looks to have fresh paint so it may have had some work done in the recent past, but as the seller notes it doesn’t run. We expect it is fitted with its original single throat Solex carb so would look to upgrade these to twin Webers which would eek a few extra horses from the motor. The engine bay also shows signs that this may have been an orange car with some paint visible along the bonnet shut gap. We featured an orange GT a few months ago in the Classic Car Auctions feature and we think its a colour that suits the car. On the underside the suspension components look a little tired so it would benefit for a full rebuild.

We’d also do some research on improvements to reduce the body lean and heavy understeer the GT is noted for. Overall this Opel GT does need work. Personally we’d strip the body down to make sure its not hiding any rust gremlins. For a car as rare as this, it deserves that level of attention. As with all the cars we feature, we’d make a few improvements to this one. We would uprate the suspension, add larger wheels and tyres, install a Getrag five gearbox and add some twin Webbers. Some improved brakes wouldn’t go amiss either.

The Opel GT was never a true sports car and was more of a tourer. Despite that it is a really looker and is one of our favourites. We’d love to own one some day. This one looks an interesting prospect for those with the time and the money to invest in bringing it back to its former glory.

This Opel GT is located in Tavistock, Devon and the asking price is £4,750.