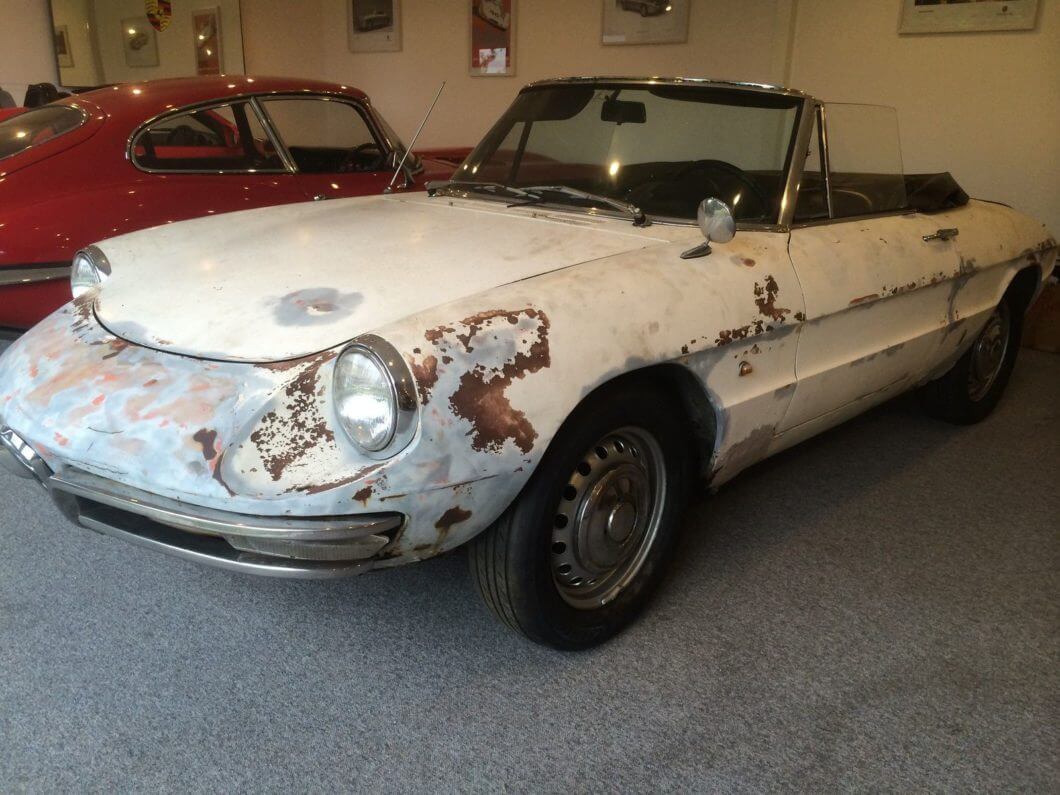 The Alfa Romeo Spider is a car we are very familiar with. It was after all the car that starred in our second feature film (you can watch our film of Colin’s 1750 Spider Veloce again here). To briefly summarise the history of the Alfa Romeo Duetto, it was launched in 1966 and was designed by Pininfarina. It was the last design project that was personally associated with the great Battista “Pinin” Farina, who died shortly after its launch. The Italian public gave it the Duetto nickname, which was just one of many the boat tail Spider earned during its life.

The Series 1 Duetto was powered by the Alfa 1570cc twin cam engine which produced over 100BHP. This was mated to a five speed transmission with power going to the rear wheels. An independent front suspension was fitted and disc brakes were standard. It proved to be a wonderful combination of beauty and simplicity combined with all the trappings of a proper drivers car. The Duetto was replaced in 1967 by the 1750 Spider Veloce and the Duetto name was dropped, by which time over six thousand had been built.

We’ve spotted a rare 1967 Series 1 Alfa Romeo Duetto for sale. This LHD drive example has been imported by the seller and requires restoration. The car is described as being original and complete but does need work. It requires require front and rear valence’s, footwells and both front and rear wing bottoms. The seller states that the front inner wings, A-pillars, B-pillars and the boot floor are perfect. The seats are in good condition and all dials are present and in good order. The soft top needs replacing and a rare hardtop is available if the asking price is met. The boot contains its spare wheel and jack. The engine is not running but does turn over and appears to have had need leads and a battery but the seller hasn’t attempted to start it. Worth noting is the damaged steering box which occurred during shipping.

First impressions are that this Alfa Romeo Duetto is a bit scary. And thats mainly down to the paint which is rough. Apart from some rust evident at the bottoms of the wings, the body appears to be fairly straight. Yes its not for the faint hearted and won’t be fixed on a bank holiday weekend but we’ve seen a lot worse. Important items such as the chrome bumpers, a wonderful detail on the Duetto, are there and look presentable. The front grill is also intact and we’ve spied at least one of the side Pininifarina badges. The Alfa Romeo boot badge is missing.

Given the cars age however, one would expect areas such as the floorpans, lower wings and the sills to require attention so on the surface its not too bad. Moving on to the interior, the seats are in great condition which is a plus and the carpets may respond to a good clean. The steering wheel will need recovering as will the dashpad. But all the dials are there, including the angled oil/water/temperature gauges (one of our favourite details on the car). It looks like the original radio is still installed as well. The engine bay is a bit tired but looks solid from what we can see. It looks like a previous owner attempted to get it going, judging by the new looking leads.

The Alfa four cylinder twin cam engine is a strong unit but we’d recommission this one carefully. It is a sweet sounding unit so it would be a shame to rush it and damage the motor. There’s also a possibility that the petrol tank in the boot is new as the paint looks fresh. Hard to tell though with only a corner visible. One thing the buyer will have to source is new plexiglass covers for the headlights. Thankfully there are numerous Alfa parts specialist around these days to help source parts.

Overall this Alfa Romeo Duetto needs a lot of work but it looks a good basis for a full restoration. It will take quite a bit of time and money to get it up to show standard, but prices of the Alfa Spider are on the rise, so it could well be a worthwhile investment. If we were buying this one we’d strip it down and make sure the body isn’t hiding any more rust. We’d renew the suspension and the brakes, install adjustable shocks and rebuild the engine to be on the safe side. And we’d repaint it in its original white (assuming that was its factory colour).

As bucket list cars go, the Alfa Romeo Duetto is one that is definitely on the list. It is one of the most beautiful cars ever built and the fact it is an Alfa just adds a certain romance to it. After spending a day filming Colin’s 1750 Spider Veloce, we really want an Alfa Spider. It really is a wonderful car and has the power and handling to keep up with modern traffic. And did we mention it was beautiful? Yup! We’ve fallen in love!

This Alfa Romeo Duetto is located in Herfordshire and has a Buy it Now price of £8,750 which is open to offers.

More details along with additional photos can be found here on eBay.