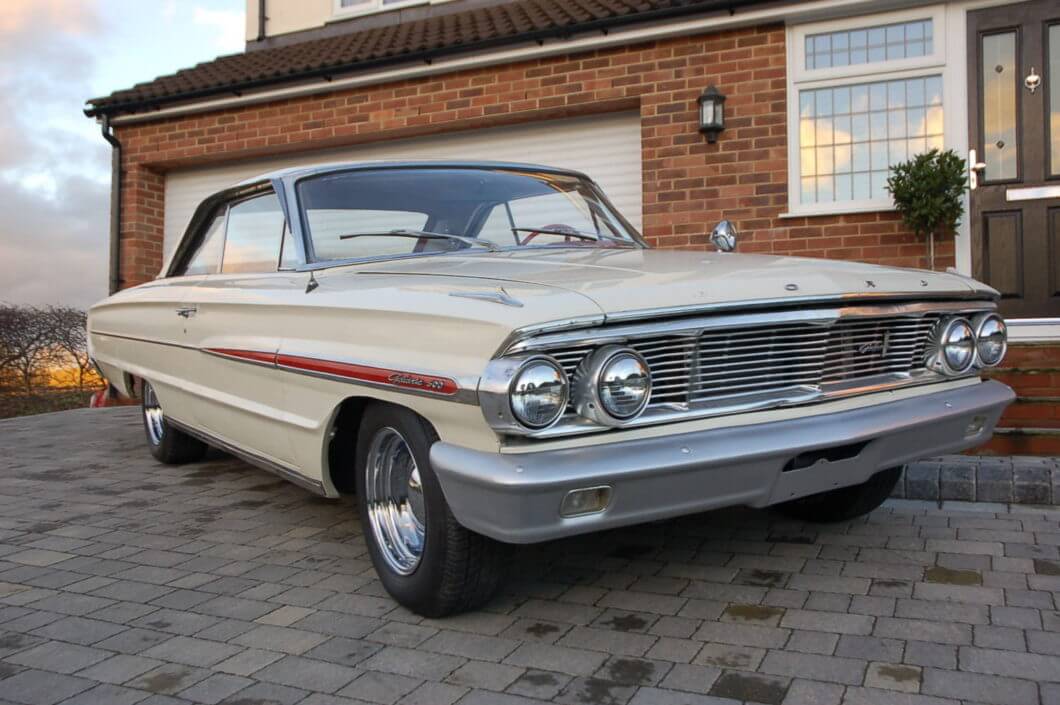 The Ford Galaxie first made its appearance in 1959 and was a series badge applied to Fords top of the line sedans, hardtops and convertibles. Designed to compete with the Chevrolet Impala, Galaxies were offered with a wide variety of engines from straight sixes to V8s, ranging from 135BHP up to 360BHP. Its design was atypical of the time with lots of chrome and large fins giving the car a space age look.

By 1964 the Ford Galaxie 500 range was given a face lift and was made more aerodynamic in preparation for entry into NASCAR. This gave the car a more sculpted, swept back look. They proved very successful in NASCAR but struggled on the drag strips and the street due to weight, something the Galaxie suffered with from day one. The base engine was now the 289 V8 producing 195BHP with the range topping 427 V8 producing 425BHP. Late in 1964 the 427 was offered with the heavy duty “Top Loader” four-speed manual and Swift Sure power brakes became standard. Use of the Galaxie name finally came to and end in 1974 when Ford dropped it for its new LTD product line.

The car on offer is a 1964 Ford Galaxie 500 two door fastback. Recently imported from the US, it is finished in Fords period popular Wimbledon White, has a red interior and chrome smoothie dish wheels. The seller states that it has an upgraded 351 V8 engine with chrome kit and has been converted to a four speed manual with a T shifter. A big bore exhaust and an aluminium radiator have also been fitted. It has an original search light fitted which is an interesting feature and it also retains its chrome headlight surrounds. The seller notes that this Galaxie requires light restoration.

This Ford Galaxie 500 looks to be in good shape. Fastbacks are one of our favorite styles of American cars and we think this one looks smart with its white paint and red interior. The red stripe down the side a nice subtle touch, highlighting the name hinting at the trim colour. The interior also looks pretty good for a 1964. The vinyl seats appear to be in good condition and while there is cracking on the steering wheel, there doesn’t seem to be any cracking on the dash pad. Some additional gauges have been added under the dash for the upgraded engine but apart from that the rest of the dashboard looks original. It even looks like it has its original period radio. The optional extra search light is an interesting feature and may hint at a previous life in law enforcement.

On the outside the large bumpers appear to have been sprayed silver. If we were buying the car we’d get these re-chromed. Another minor details is the missing its “F” on the Ford bonnet badge but that is an easy fix. The engine bay is clean and the replacement motor looks fresh and has upgraded shiny bits. We assume it is a 351 crate motor but that would need to be checked.

Assuming that it hasn’t got any rust this looks like a nice Ford Galaxie 500 that you can use and drive. Its actually nice to see an American V8 with a manual gearbox and we’d love to hear the sound of that V8 as we take it through the gears. This Ford Galaxie 500 fastback would make a good cruiser and is a lot of classic American V8 for the money.

This Ford Galaxie 500 is located in Brentwood Essex. The asking price is £11,995 which is open to offers.