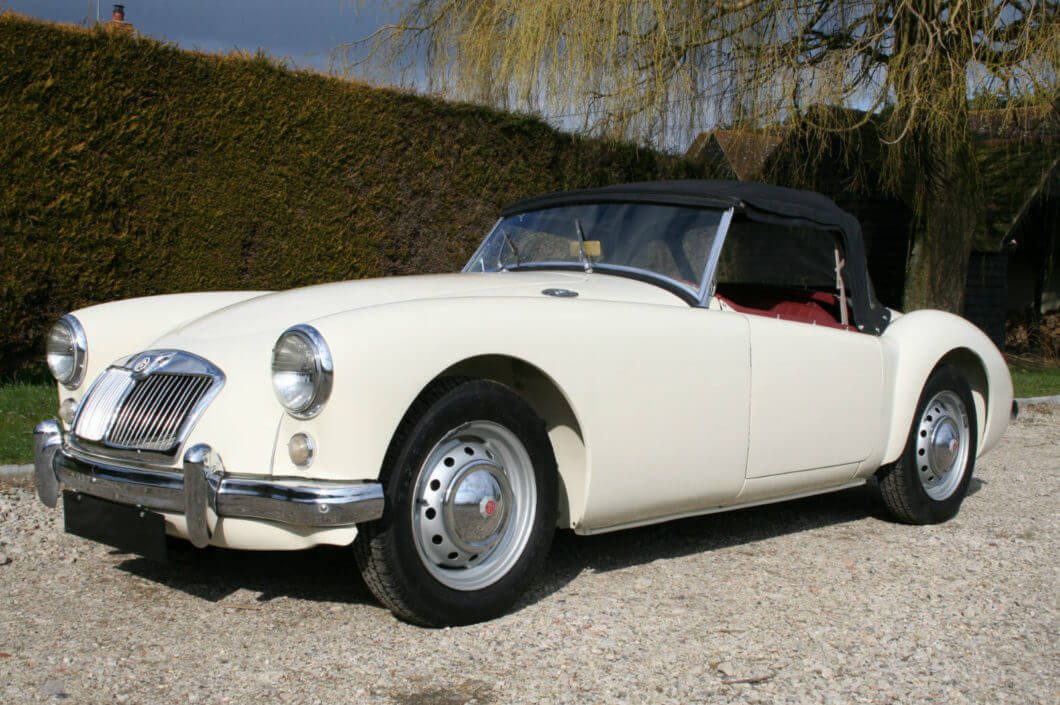 When launched in 1955 the MG MGA was a brave departure from its predecessor, the pre-war designed MG TF. The new streamlined body was first hinted at in 1951 with the Syd Enever designed TD Le Mans car. This car was based on the original TF chassis but due to problems with the drivers seating position, a brand new chassis was designed for the new MGA. Launched in 1955, the new MG MGA was offered in roadster and coupe body styles. Power was provided by the MG Magnette single cam 1489cc engine which produced 68BHP. A four speed gearbox was standard with power being sent to the rear wheels.

The separate chassis/body design had an independent front suspension with coil springs and wishbones and a rigid axle with semi-elliptic springs at the rear. Drum brakes were standard all round. Thanks to its striking looks, the MGA was a huge success for MG with over 90% of its 100,000 plus production being exported from the UK. It proved particularly popular in the US where it found success in racing events across the country. However due to problems with the later twin cam engine, production finally came to and end in 1962

The MG MGA on offer is a 1958 MK1 which has the original single cam 1489cc engine. It is described as a matching numbers car and has been subject to a full concours level restoration. The seller describes it as being exceptional and comes with a file of receipts. It has 100 miles on the clock so we assume it has had a rebuild though this is not mentioned in the listing. No other details are provided, the seller letting the photos do the talking.

We’ve always admired the shape of the MGA. It has beautiful lines and a wonderfully graceful silhouette. Details like the chrome air vents on the wings are lovely touches and emphasise the uncluttered clean look. The photos show that no expense has been spared on the restoration of this MK1 and it looks beautiful with its cream white paint and contrasting red interior. Everything from the engine bay to the suspension looks spotless.

Clearly a lot of time and detail has gone in this restoration. The fact that this is a matching numbers MK1 makes it all the more interesting and a worthy investment. With excellent handling and a sporty engine, the MG MGA is a fun car to drive. We can picture ourselves blasting along in this MGA on a twisty countryside B road, the hood down and that sporty exhaust note encouraging us to just keep on driving. One day perhaps…

This MG MGA is offered for sale by St Andrews Autos in Chelmsford Essex. The asking price is £34,950.

See our other feature for an interesting restoration project MG MGA