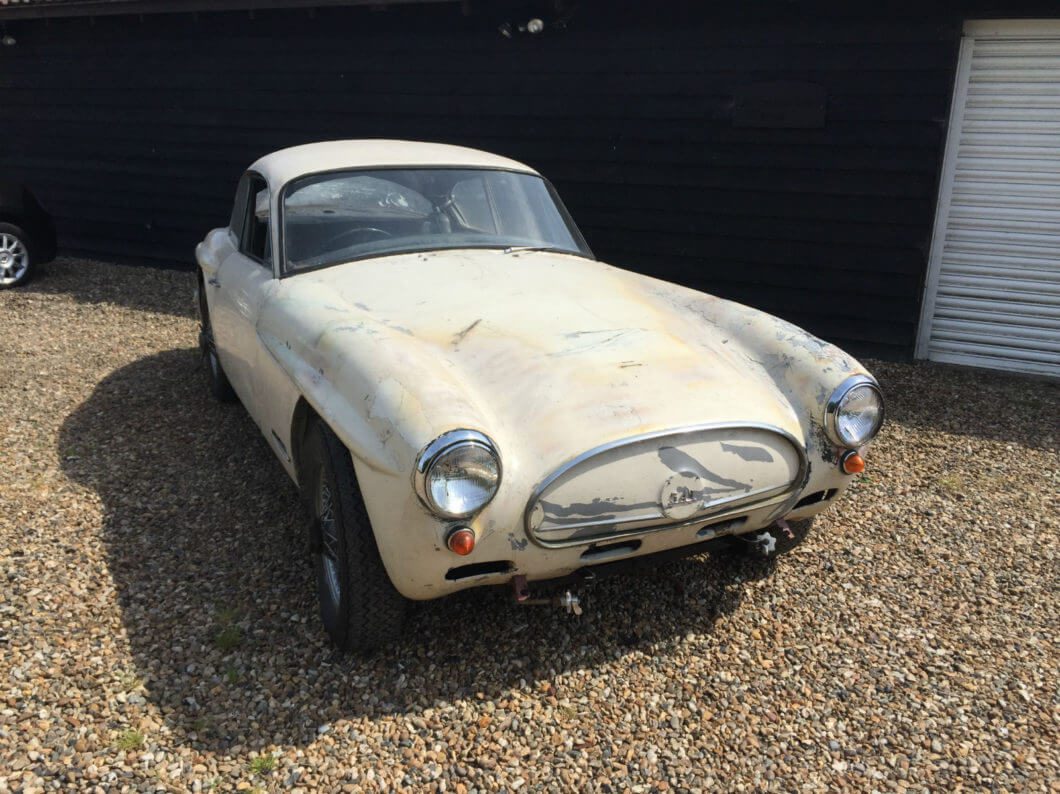 First shown at the London Motor Show in 1953, the Jensen 541 heralded a new era of glass fibre production cars for Jensen Motors. Designed by Eric Neale and Richard Jensen, the new luxury GT/sports saloon had its body mounted on a steel chassis which had a live rear axle and independent wishbone suspension at the front. While the body was glass fibre, the doors were aluminium with the windows and rear window made of perspex, further helping reduce weight. Power was supplied by the Austin 4ltr straight six which was fitted with triple SU carbs which was good for 135BHP. Austin also supplied the four speed manual gearbox. Automatics were offered on later models. An unusual feature of the 541 was the mouth shaped front grill which could be opened and closed manually from the cabin. In 1956 the 541 Deluxe was released which featured all round Dunlop disc brakes, the first British production car to do so.

In 1957 the 541R was introduced which featured rack and pinion steering along with a revised high performance DS-7 engine, which moved from triple to twin SU carbs. The new steering system improved handling which was need to manage the cars 125mph top speed. The final edition Jensen 541S arrived in 1960 with a wider body which saw the front flap replaced by a more conventional grill. This was warranted as Jensen were planning to use Chrysler V8s which would have produced more heat than the Austin straight six. The revised body gave a hint of what was to come with the Jensen C-V8 which eventually replaced the Jensen 541R in 1962 which saw the addition of a limited slip differential. In all over five hundred Jensen 541s were built from 1955 to 1963.

Offered for sale is a very rare 1956 Jensen 541 that requires restoration. The seller states that it is a 541 Deluxe model which has been fitted with a later 541R body. The listing goes on to state that the registration number suggests that this is a works prototype, which would obviously need verifying. The engine has had a top end overhaul and is said to run well and holds pressure at 50psi. The steering and front suspension were also overhauled. The listing also notes that the car was previously owned for twenty seven years.

Jensen Motors designs from the 1950s and 1960s are an acquired taste and have not always been appreciated. They are very distinctive cars. The Jensen 541 however did start the line that would lead to the Jensen C-V8 and ultimately the Jensen Interceptor (which has seen a resurgence in interest in the last few years). So it is quite an important car in that respect. With just over five hundred 541 models built across its life span, they are very rare cars and don’t come up for sale very often, especially one that needs restoring. Its pretty obvious that the body work on this one is scruffy and will need to be stripped back. And as its fibreglass this won’t be done over a long weekend.

The interior looks very tired as well but the seats may respond to some cleaning. Its hard to tell from the photos but the dashboard and instruments appear to be all there. It also looks like the rear perspex window is cracked, which is not surprising given the age of the car. Wire wheels were an optional extra on the 541 so these may have been fitted at the factory, or are simply later additions.

The seller does mention that the car is complete, however the front bumper is missing in the photos and its not mentioned whether it is with the car or not. As the listing states, most of the work appears to have gone on the engine and the front suspension, with may new parts evident. So at least some of the recommissioning work has been started.

What will need investigating however is the condition of the tubular steel chassis. The body may not rust but the chassis does which was one of the key weaknesses of the Jensen 541 and the later C-V8. If it is rusty then this will require a body off investigation, which to be honest, we would do anyway if we were restoring this car.

We like this 541 and find its sporting GT body very appealing. It would make for a very nice, old fashioned GT cruiser and we’d like to hear that Austin straight six running on its triple carbs, to see how it compares to the Chrysler V8 in the C-V8. Its an interesting project and if the works connection proves true, then the new owner could have a very rare Jensen indeed. Its almost worth it just to use that manually operated cooling flap at the front. That unique feature alone is bound to be a talking point at car meets. We think this Jensen 541 is worth a look and would prove to be a worthwhile restoration, as long as that fibreglass body isn’t hiding a chassis of woe.

See our feature for a rare 1963 Jensen CV8 restoration project