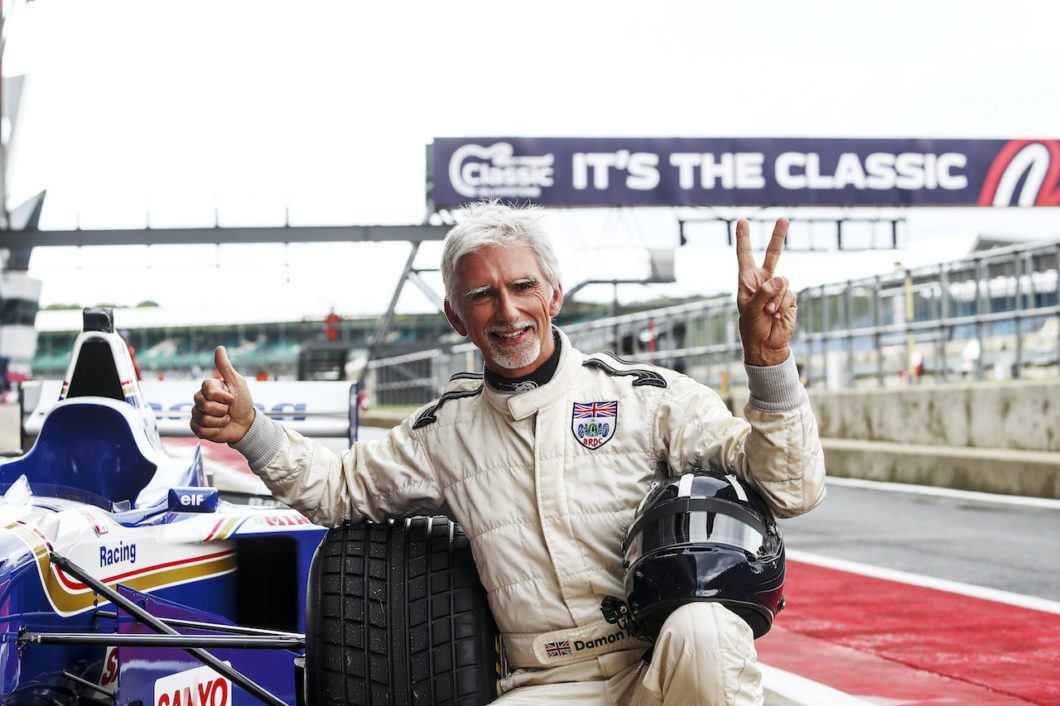 Formula 1 World Champion Damon Hill was the star of the show on the final day of The Classic 2021. Marking the 25th anniversary of his World Championship win in 1996, Hill was reunited with his title winning Williams-Renault FW18 for some evocative laps of the famous Grand Prix track.

“I can’t believe this is the 30th year of the Classic and yet it is my first visit. I have thoroughly enjoyed the day and the accessibility to the paddocks and cars is superb,” enthused Damon.

“When I told my family I was driving today, I was amazed and delighted to find out they wanted to join me and we have all had a great day out. A highlight was obviously being reunited on track this afternoon with the FW18 to celebrate 25 years since I won the world title with Williams and I am grateful to Silverstone and the Williams Heritage team for making this possible.”

Hill’s drive in his iconic Williams-Renault FW18 was one of Sunday’s many standout highlights at The Classic. On track were no fewer than nine showdowns, which provided nine hours of high octane entertainment. More than 900 racing icons from motorsport’s golden years renewed their rivalries on the famous tarmac.

In between the race action, spectators were treated to a number of record-breaking parades celebrating key motoring milestones. These included a gathering of more than 375 Triumph Stags who were celebrating the British sportscar’s 50th birthday . With such a fabulous turnout, it was no surprise that the Stag Owners’ Club was presented with the Adrian Flux Trophy for the Car Club of the Show.

Another eye-catching parade marked the 40th anniversary of the DeLorean DM-12, with no fewer than 20 of the iconic movie screen time-travellers attracting massive attention throughout the day.

TV petrolhead Richard Hammond was another famous face at The Classic on Sunday. He was filming for a new Discovery+ programme as a selection of his own classic cars and bikes were sold at Silverstone Auction’s, raising close to £250,000 to finance his new classic car restoration business.

Back in the paddock, the Stuart Graham ‘Scarf and Goggles’ Trophy was presented to the famous short-nose Jaguar D-Type (OKV 3), which finished second at Le Mans in 1954 with drivers Duncan Hamilton and Tony Rolt.

The coveted award is presented annually to what is judged to be the most admired car competing at The Classic. The Jaguar’s proud owner, Martin Halusa, received the accolade from Graham, a TT winner on both two wheels and four and one of the inspirations behind the original Classic event first staged at Silverstone in 1990.

Notable racing performances in the worst of the morning’s weather came from the flame-spitting Ford Sierra Cosworth RS500 shared by Mark Wright and David Coyne, which won the Adrian Flux Trophy for MRL Historic Touring Car Challenge and Andrew Smith who won the second of the weekend’s HSCC Historic Formula 2 Series in his March 742.

The 60th Anniversary E-Type Challenge was another wet race – Jon Minshaw being declared the victor ahead of impressive young guns Ben Mitchell and Danny Winstanley. Father and son team Martin and Alex Brundle were among the leaders but fell back to finish eighth.

With a dry track, the afternoon’s programme saw Michael Lyons (1981 Ensign N180B) do the double in the second of the weekend’s Murray Walker Memorial Trophy for Masters Historic Formula One races and Andrew Haddon scored a surprise win in the second HGPCA Pre ’66 Grand Prix Cars showdown – his front-engined 1960 Scarab Offenhauser conquering all the later generation rear-engined Brabhams and Coopers.

The day reached a fantastic conclusion with the two mighty Peugeot 908 Le Mans prototypes of Shaun Lynn and Francois Perrado duelling for victory among the Masters Endurance Legends.

Then there was the entertaining antics of the Classic Mini Challenge, the pocket rockets providing a fitting finale to a fantastic weekend.

“The weather might not be quite as summery as we might have hoped, but it did absolutely nothing to dampen the spirits,” said Nick Wigley, CEO of The Classic promoter Goose Live Events. “It was clear from all the smiles just how pleased everyone was to be back enjoying all that The Classic has to offer.”

All the action from the three days of The Classic 2021 can be relived on the event’s YouTube channel: www.youtube.com/silverstoneclassic.