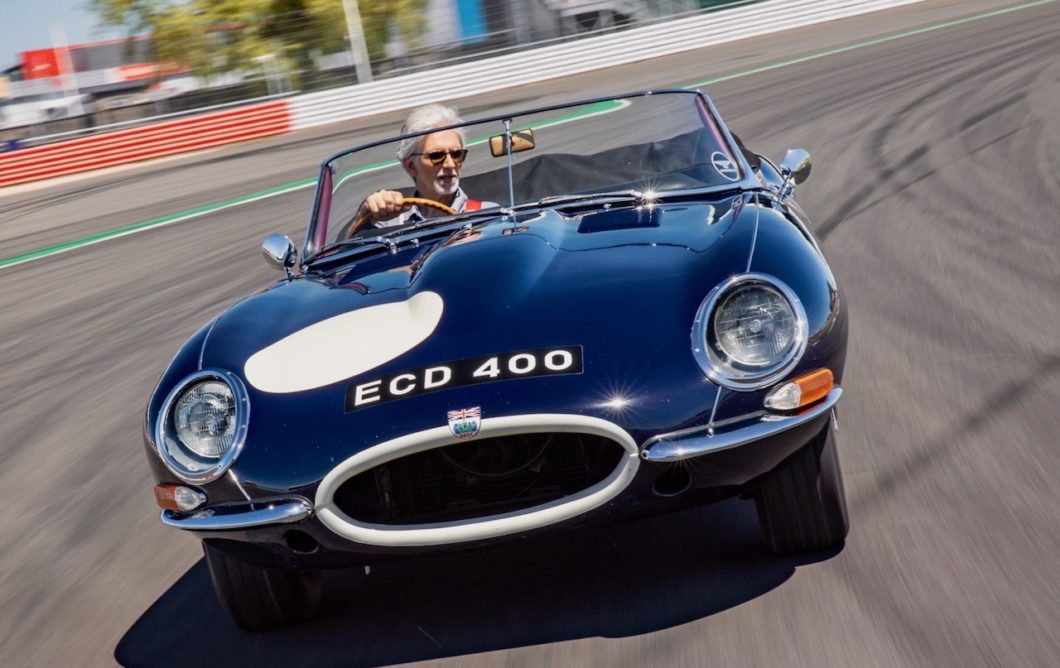 As excitement builds for next month’s 60th anniversary Jaguar E-type celebrations at The Classic at Silverstone, Damon Hill has fulfilled a family dream by driving his Dad’s debut winning 1961 E-type, “ECD 400”.

One of the most famous of all racing E-types, the legendary indigo blue roadster was driven by Graham Hill to a stunning debut victory 60 years ago.  – will be on display on all three days of The Classic and will also lead out a special E-type Diamond Jubilee track parade on Saturday evening at the world’s biggest historic motor racing festival.

Back in April 1961, just one month after the sensational British sportscar was unveiled to rave reviews at the Geneva International Motor Show, the E-type was raced for the very first time at Oulton Park in Cheshire.

Hill was aboard ECD 400, which was entered by team owner Tommy Sopwith, who famously favoured 400 number plates. Fellow grand prix driver Roy Salvadori was behind the wheel of the rival John Coombs’ entry, adorned with its own evocative BUY 1 registration plate.

It was Hill, though, who had the honour of making motor racing history. The future double Formula One World Champion powered ECD 400 to a landmark debut victory, finishing ahead of the Aston Martin DB4 of Innes Ireland with early race leader Salvadori settling for third after issues with the brakes on his Jaguar.

Now, 60 years later, ECD 400 was back at Silverstone for Damon to salute his father’s 1961 heroics, the 1996 World Champion cherishing the legendary dark blue Jaguar for the very first time.

“It was a fantastic opportunity for me to drive the E-type of all E-types,” enthused an enchanted Damon. “In the Hill family we cherish the fact that dad was the first guy to win a race in an E-type and I feel very, very privileged to be given the chance to take such a famous car for a spin.”

“The experience captured everything that epitomised British motor sport of that era. ECD 400 is a hugely iconic Jaguar. It’s a beautiful looking car and sounds absolutely gorgeous – so for me to step back in time and drive the very same car in which my father won that first race 60 years ago was a wonderful bit of Hill history.”

Celebrations at The Classic to mark the E-type’s 60 years milestone will not only include the distinguished presence of ECD 400, but also two 60th anniversary E-type Challenge showdowns on the Silverstone Grand Prix circuit. Spectators can also look forward to a dazzling ‘Catwalk’ display of E-types.

Organised by the Jaguar E-type Club, the previously announced ‘Catwalk’ showcase will feature both fixed head coupe and convertible body styles, ranging from the early Series 1 trailblazers, right up to the final Series 3 V12-engined evolution, which is itself celebrating its historic 50th birthday this year.

All tickets for The Classic must be purchased in advance with adult general admission currently starting at £47 and the price of a three-day weekend ticket just £125. Free admission is offered to accompanied children aged 10 and under, while day tickets for those aged between 11 and 15 are priced from just £6.

Ticket-buyers can also book with confidence with tickets carrying a COVID booking guarantee which means that if a change in Government guidelines prevents spectators attending, all ticket-buyers will have the option to either transfer their ticket to the following year or receive a full refund.