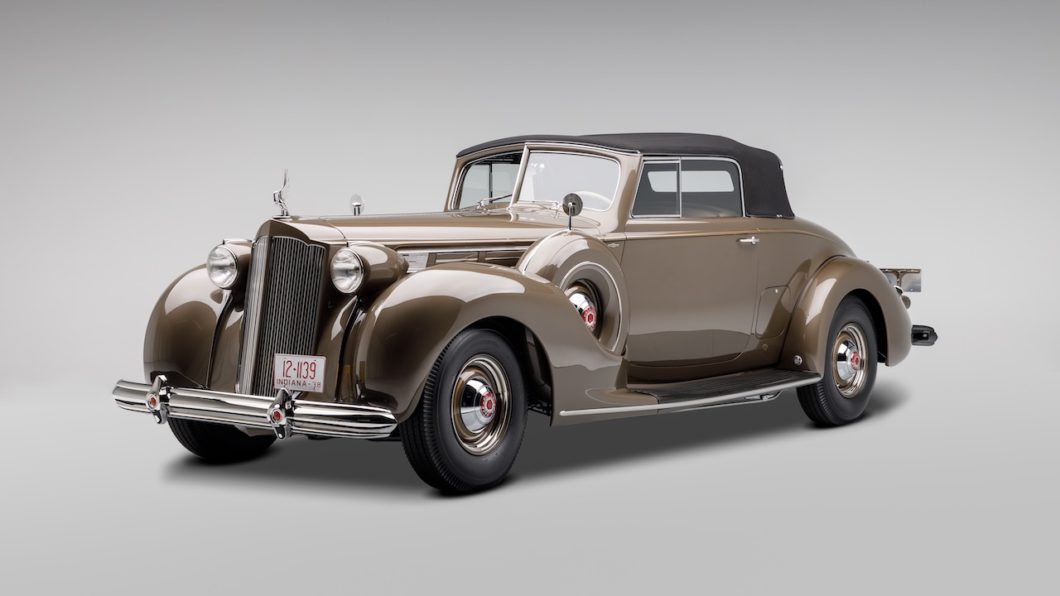 The Concours of Elegance has announced it will display seven of the world’s finest 1930s Packard Twelves at Hampton Court Palace, which is taking place from 2-4 September this year.

Packard was an American luxury automobile maker famed for its opulence, mechanical quality, refinement and reliability. The company was active from the production of the first Packard automobiles in 1899, to the last Detroit-built Packard model in 1956. It was one of the finest luxury car makers before World War II, and was a firm favourite among European Royalty, celebrities and Corporate America.

Belonging to a prominent American collection, The JBS Collection, the selection of Packards – the ‘Magnificent Seven’ – have been subject to an exacting 100-point concours restoration by American specialists LaVine Restorations, and have never been displayed outside the US before. The Concours of Elegance will offer a once in a lifetime opportunity to pore over these spectacular motor cars on UK soil.

The first model on display is a Gun Metal Gray 1933 Packard Twelve Coupe Roadster – of which only five were ever manufactured – and just two remain. This model and year was the first run of the Packard Twelve, which succeeded the earlier Packard Twin Six. The car features a 7.3-litre 160bhp V12 engine and was the only year which featured a unique foldout window design. This particular Packard commands a sizeable trophy cabinet, having won three recent awards, at Pebble Beach Concours d’Elegance, Amelia Island Concours d’Elegance and Concours d’Elegance of America at St. John’s.

Alongside it is a stunning Packard Blue 1934 Packard Twelve Coupe Roadster. As a 12-cylinder Eleventh Series, this is one of the most sought-after of all the Packard Coupe Roadsters. 1934 was the first year of the Eleventh Series cars, and is widely considered to be the most prestigious year for the Packards’ iconic design. This car features a 160bhp, 7.3-litre V12 Engine with a Three-Speed Selective Synchromesh Manual Transmission.

The third Packard Twelve on display is a 1934 Packard Twelve Formal Sedan. This particular example is also an Eleventh Series car, in brown. The Sedan features beautifully elegant ‘suicide’ doors, and the same smooth V12 engine, and running gear as the Coupe cars, but with seating for more passengers.

The 1934 Packard Twelve Victoria is the next Packard on display. This car features a LeBaron body and is the only car ever known which features a Dietrich custom interior in a Victoria. It was also the first Packard model that offered a radio option, which this Victoria has installed. This model was only offered for three years of production, and the 1934 model was the most sought after. There are now fewer than ten Packard 1107 Convertible Victorias still in existence.

Visitors to Hampton Court Palace will also have the chance to pore over a particularly special 1934 Packard Twelve Convertible Sedan, originally commissioned by an adventuring American heiress, Louise Arner Boyd. The Dietrich individual custom car subsequently accompanied Ms Boyd around the world, including on a famous – naturally chauffeur driven – exploratory tour around rural Poland in the mid-1930s. More recently, this well-known example has won awards at The Pebble Beach Concours d’Elegance and Concours d’Elegance of America at St. John’s.

The next Twelve is something quite special, a black 1936 Packard Twelve All Weather Cabriolet, which spent time as a Hollywood car. The car was once owned by Charlie Chaplin via Charlie Chaplin Studios. Not only that, the car also featured in ‘The Godfather’, and ‘The Betsy’, as well as appearing in ‘Remington Steele’ with Pierce Brosnan. There are only two of this particular version known in the world. This particular All Weather Cabriolet is also a LeBaron car. It was a 1407, which was also a limited, special-order model. The 1407 featured an upgraded 7.8-litre 175hp engine.

The final variant on display is one of the last Twelves ever made, a Convertible Coupe model. In 1938 Packard started an overall new design featuring a more upright radiator, higher front fenders that wrapped around the side-mounted spare wheels, and a Dietrich inspired V-shaped windshield. This is the 24th of 32 1607 Twelve Convertible Coupes that Packard made in 1938 (feature photo top of the page), and is believed to be one of only eight of this make and model still in existence. This particular car is a finished in a subtle Columbian Beige.

Outside of the main display of vehicles, the Concours of Elegance will gather a total of around 1,000 cars in a number of special features and displays, including a collection of Ferrari Formula 1 cars to mark the 70th anniversary of the iconic marque’s first World Championship win, a display of unique or bespoke modern rarities in the Future Classics class, and a triumphant return of star cars from in the inaugural 2012 Concours of Elegance.

2022’s event will also feature a stunning array of royal cars from around the world that have passed into private ownership, and the 30UNDER30 Concours returns after it’s highly successful debut last year, once again aiming to inspire the next-generation of classic car enthusiasts.