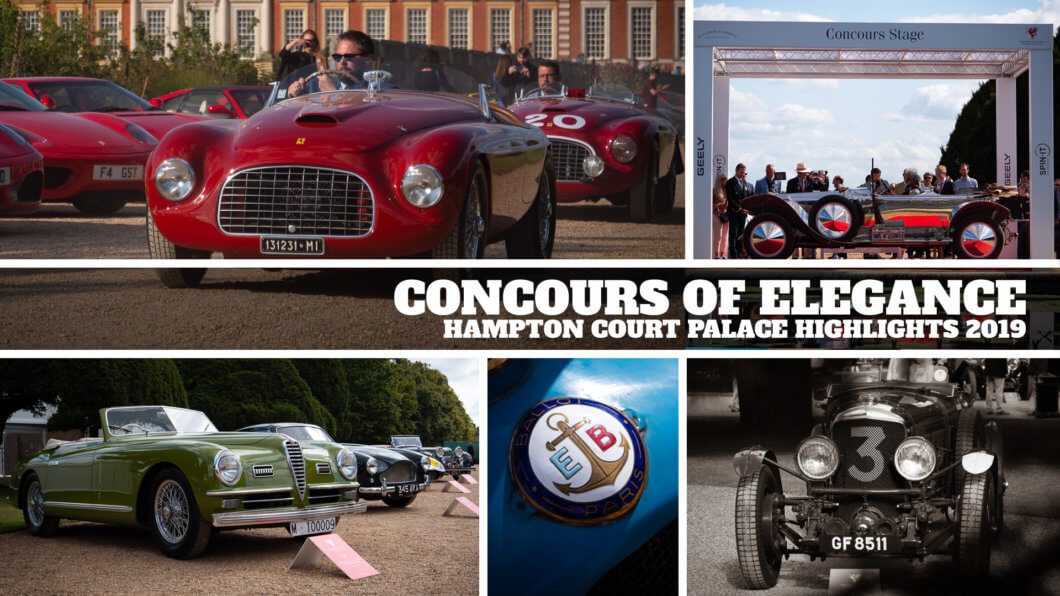 This year’s Concours of Elegance returned to the historic Hampton Court Palace for another display of automotive excellence. London’s most prestigious concours event marked two significant milestones, 100 years of Zagato and 100 Years of Bentley. As if that wasn’t enough to quench the thirst of the automotive enthusiast collective, the event also marked the 70th anniversary of the Ferrari 166MM, with five superb examples chosen to represent the marque.

Take to the Road attended on the final day of the three day Concours and the sun came out to bathe both cars and visitors in glorious sunshine. Once again the caliber of cars on display was exceptional, with over sixty on display within the sumptuous gardens.

The Bentley Centenary brought together some of the rarest and most important models of the famed British marque. One of the most significant (among many others) was the 1929 Bentley 4.5 Litre Single Seat “Bentley Blower No 1”.

First owned by Sir Henry “Tim” Birkin, one of the famed Bentley Boys, it was one of the first to be fitted with a Roots-type supercharger and produced around 242BHP in race setup.

It originally started life with a fabric body but this caught fire during a six hour race in Essex in 1929. Birkin then had it rebodied in aluminium by Reid Railton, who finished it in the red colour it wears today.

Another fine example marking the centenary display was the 1930 Bentley Speed Six “Old No 3”. This is one of the original three Speed Six’s that made Bentley a performance legend. They were built with one purpose in mind, to win Le Mans and the Brooklands Double Twelve.

Powered by a massive 6.5ltr 200BHP straight six, the Speed Six brought new levels of performance that allowed Bentley to challenge Mercedes. This car has now been returned to its original 1930s Le Mans specifications.

The absolutely fabulous and very striking 1930 Bentley Speed Six Gurney Nutting Sportsman’s Coupe was also on display. This unique Bentley was commissioned by Woolf Barnato, then Bentley’s Chairman, after his famous race against the equally famous Blue Train in 1930.

To mark his triumphant win, he apparently sketched the lines of his new special on an envelope. And hence the “Blue Train Special” was born.

There were awards aplenty for the best cars at this years Concours of Elegance. Again the choices the judges had to make were very difficult, as all were deemed worthy to have the honour of displaying at Hampton Court. One very deserving winner was the stunning 1938 Bugatti Type 57.

This car originally started life with a James Young saloon body, but it fell into such disrepair it was restyled as a replica of the flamboyant cabriolet presented to Mohammad Pahlavi, who went on to become Shah of Persia in 1941. It deservedly received the Octane Public Choice Award and was a very popular winner.

The winner of Best of Show however was the remarkable 1919 Rolls-Royce Silver Ghost. This historically significant car was ordered new by Maharaja Sir Bhupindra Singh of Patiala, in Punjab.

He already owned 25 other Rolls-Royce’s but this unique polished aluminium Silver Ghost was chosen as his hunting car, hence the four shotguns positioned on the running boards.

This fascinating Silver Ghost was restored by its current owner who returned it back to it’s original magnificence, one hundred years after it was delivered to its first owner. It was therefore very fitting that it received the Best of Show Award at the Concours of Elegance 2019.

Finally there were the five Ferrari 166MM which had the honour of displaying in front of the entrance of the palace. These fabulous examples of Ferrari’s earliest models traveled from all over the world to mark the 75th anniversary of the 166MM.

These included a 1949 Ferrari 166MM Barchetta, two 1949 16MM Barchetta Touring, a 1950 166MM Barchetta and a 1951 Ferrari 212 Export Berlinetta Touring. All these cars laid the foundations for the success of Ferrari and helped build the marque into one of the greatest automotive manufacturers of all time.

When the day finally drew to a close it was hard to believe that the Concours of Elegance was over for another year. The organisers once again excelled in their selections, with some amazing cars offered the chance to display at Hampton Court. It was an excellent day out for young and old and both vintage and classic automotive enthusiasts alike. Who knows what delights will grace the grounds of the palace in 2020.

Additional Photos from Concours of Elegance 2019