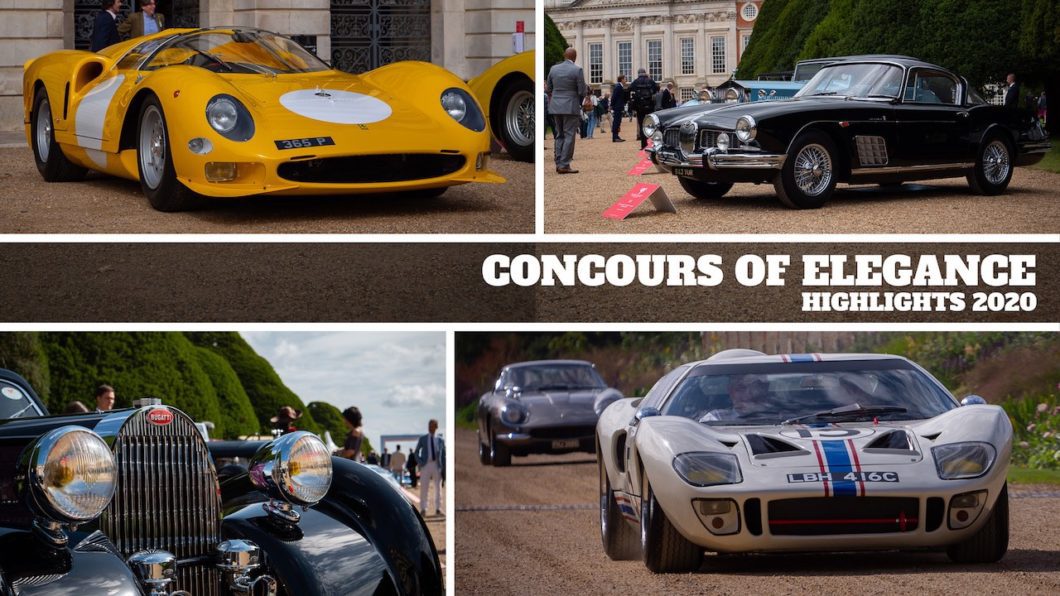 This years Concours of Elegance returned once again to the splendid grounds of Hampton Court Palace. It was a significant weekend for the show, which was the first major international concours d’elegance event to take place since Amelia Island in March. Like many other large scale public events around the globe, the Concours was essentially at the mercy of government guidance, the threat of renewed restrictions always an uncomfortable reality. But thankfully the show was able to press ahead, with visitors treated to a wonderful display of automotive perfection at Henry VIII’s royal palace.

Adding to the overwhelming sense of the relief that the Concours was going ahead, was the fact that the show was blessed with glorious weather for the whole weekend. It was a very welcomed stroke of good fortune, with many visitors and indeed exhibitors attending their very first car show of 2020. It seems strange to be saying that in the month of September, but it is a reflection of the current virus dominated times we live in. It was therefore very fitting that the sun came out to bask the wonderful cars in glorious sunshine over the weekend.

VIP guests were greeted to an impressive arrival on the Friday morning, as a convoy of display cars made their way through the parkland and into the Great Fountain Garden. A brief shower threatened to put a dampener on proceedings, but it quickly cleared as the cars and their owners arrived. The morning procession has become a key ritual of the Concours of Elegance, the opportunity to see some of the rarest and most expensive classics and super cars on the planet arrive under their own power is not one to be missed.

The central display of this years Concours of Elegance was a homage to the great Ford v Ferrari rivalry of Le Mans in 1966, which of course was portrayed in fantastic fashion by Matt Damon and Christian Bale in the blockbuster Ford v Ferrari movie, which was released last year.

At the heart of the historic motorsport display were two legends of Modena, the 1965 Ferrari 365 P and the 1965 Ferrari 250LM. Both cars looked resplendent in vibrant yellow in front of palace and the presence of two historical significant Le Mans racers was a major coup for the show.

As always the caliber of the cars on display at the Concours of Elegance was exceptional. Despite the challenges posed by COVID19, the organisers managed to assemble some truly wonderful cars and the fact so many were able to attend the event was something to celebrate.

The Best of Show award was snapped up by the legendary 1969 Porsche 917 K, the very car driven by Richard Attwood and Hans Herrmann to Porsche’s first victory at Le Mans in 1970. It is little surprise that such a historically significant race car won the Concours top prize. It was a special moment to be able to get so close to such a legend of the Le Mans 24 Hours.

There were also many other cars on display that were contenders for the Best of Show award. The variety and quality of the cars on show certainly made the judges choices a difficult one. One important piece of automotive history was the simply exquisite 1957 Jaguar XK150 S Bertone. This wonderful car was styled by the great Franco Scaglione at Bertone.

It is one of four Jaguar XK150 chassis’s that were dispatched to Turin in the 1950s for prototype evaluation. The end result was a wonderful Italian take on the great British sports car. And this example, Car No 2, is the only know survivor of the four prototypes. At any other concours event it would surely have taken home the top prize.

Continuing the elegant post war car theme was the eye catching 1949 Delahaye 135 MS. This particular example is one of three to have been coach built by Italian outfit Carrozzeria Viotti. Of those only two are thought to have survived, making this Modifee Speciale a very rare car indeed.

Another fabulous automobile on show was the beautiful 1938 Bugatti Type 57 Atalante Coupe by Gangloff. This rare touring Bugatti is a one off created for a wealthy French businessman. Fortunately it survived the war and later found its way to London where it was used by the French Embassy.

The world of motorsport was further honoured with a fine display of McLaren’s, plus a special line up of former F1 cars to mark the 70th anniversary of Formula 1.

The Concours of Elegance is also known for selecting left field cars from the history of the development of the automobile. This year that honour fell to the eccentric 1921 Leyat Helica. At first glance it looked like a plane had flown to Hampton Court and landed in the palace grounds, its wings neatly tucked away somewhere. However the Leyat is indeed a propeller driven car, designed by French engineer Marcel Leyat.

With the Concours of Elegance over for another year, the organisers can take a bow for putting together a fantastic show in very challenging circumstances. It was a resounding success, which followed on from the London Concours only just two weeks before. With autumn now drawing in, we can look back and reflect on what a rare moment it was to spend a few days admiring collector cars at a public event. The fact this was Take to the Road’s second car show to attend in 2020, shows the impact the new normal we are all still adjusting to is having on the car show network. Here’s to the Concours of Elegance 2021 and a return to normality!