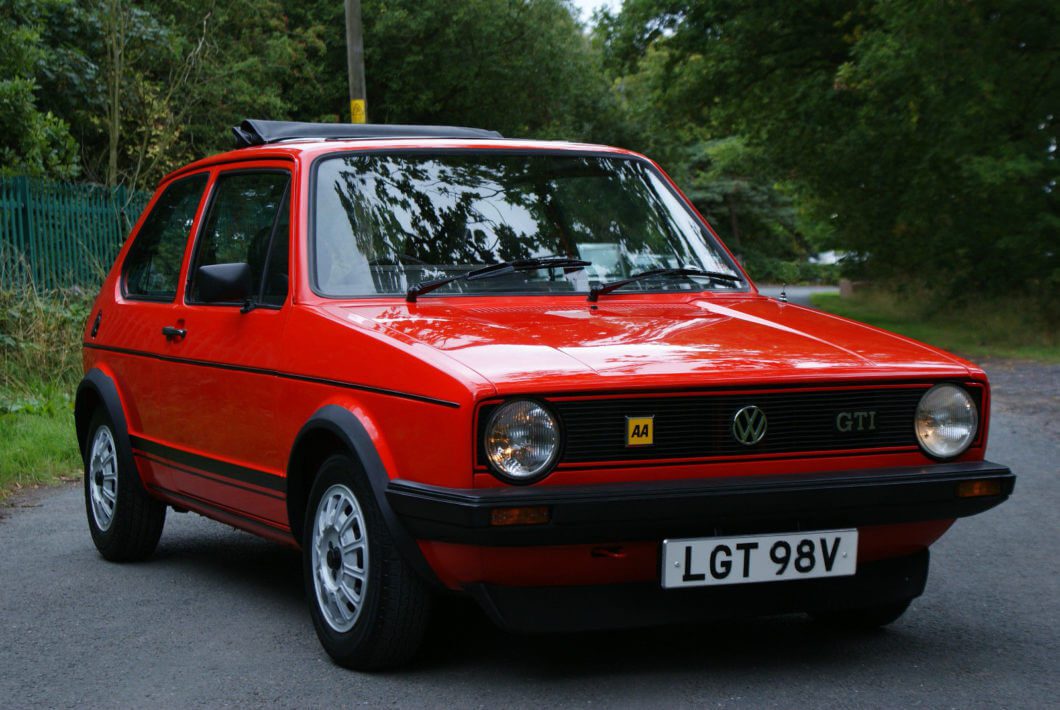 The VW Golf GTi is a car that needs little introduction. It is one of the longest running production sport hatchbacks of all time and as a result, one of the most popular. It all started with the VW Golf GTi Mk1 Series 1. Many credit it with being the first hot hatch, but VW was actually pipped to the post by the Renault 5 Gordini and the Autobianchi A112 Abarth. The VW Golf was design by the great Giorgetto Giugiaro of ItalDesign and debuted in 1974 with a 1093cc 49BHP engine. The radical new boxy body was fitted with an independent MacPherson strut front suspension and semi-independent rear suspension. This gave the Golf excellent and responsive handling compared to other cars of the day.

In 1975 the VW Golf GTi Series 1 was launched at the Frankfurt Motor Show. The new compact hatchback featured a Bosch K-jetronic fuel injection system which debuted on the 1588cc 108BHP four cylinder engine. This lively unit was mated to a four speed transmission which power going to the front wheels. In 1979 the first batch of GTi’s arrived in the UK to test the market. This proved successful with official importing starting a year later. A five speed transmission was added later in 1979 which was followed in 1982 by the more powerful 1781cc engine. This 110BHP unit offered more torque across the range but was considered less refined than its 1588cc predecessor. The successful VW Golf GTi Mk1 was eventually replaced in 1983 by the VW Golf GTi Mk2.

Despite the popularity of the Series 1 Golf GTi (i.e. the first production run of the model before revisions were made), very few have survived in the UK due to poor rustproofing. Which makes the 1979 VW Golf GTi Mk1 Series 1 we have spotted for sale very special. The seller states that it is one of the surviving cars from the original batch that was specially imported to the UK in 1979 to test the UK market. It was sold new by Leathwoods of London in August 1979 and was optioned with a sliding roof, radio cassette and rust proofing. It is said to have all its paperwork from new including the original bill of sale and part exchange paperwork. The car was repainted last year but the seller states that this requires further attention. The odometer isn’t working and neither is the cigarette lighter. The listing also notes that the engine bay needs detailing and the engine itself has covered 135,000 miles.

When we first spotted the listing for this VW Golf GTi Mk1 Series 1, we have to admit to getting just a little bit excited. You see we’ve lusted after a Mk1 GTi ever since we were taken for a spin in one in 1994. Our current A-B car is a 1995 Mk3 Golf GTi 8v which we’ve owned for eleven years. And before that we had a 1993 Mk3 Golf 1.9 diesel… so you can say Golfs run in the family. The VW Golf GTi Mk1 Series 1 on offer presents very well for a 1979 model and was clearly saved by its first owners wise decision to stump up the extra cash for rustproofing. While the Mk1 Golf was well built, its metal work wasn’t galvanised and issues like thin paint and a lack of rust proofing from the factory mean that most have simply rotted away. Finished in the classic Golf Mars Red, this example looks good in the photos. The seller has stated that the repaint needs improvement. They haven’t elaborated on this so an inspection would be needed to determine what rectifications are required. The optional extra alloy wheels look to be in good condition and are themselves rare to see.

The rest of the exterior trim appears to be in good order and all the badges are present and intact. The sliding sunroof is an interesting feature which must make this Series 1 survivor even more rare. The engine bay is not too bad but as the seller states it could do with a good detail. Moving on to the interior, the photo supplied is a bit dark but the drivers seat appears faded next to the passengers. And there is a small hole just visible on the edge of the drivers seat as well. We have seen another Series 1 GTi which had its seats re-trimmed in genuine VW tartan pattern fabric so it shouldn’t be too difficult to get the seats re-trimmed, should the new owner wish to do so (VW don’t stock this trim any more however so that one may have been a lucky find). No photo is supplied of the rear seats. The classic Golf ball gearknob is present as is the rare and original steering wheel which was only fitted to the Series 1 GTi’s. It looks a little worn after 135,000 miles of use so a refurb would be a good idea to freshen it up. The dashboard on the Series 1 has two round binnacles in the centre and is actually very different to the later Series 2 dashboard. These have a square recessed binnacle arrangement. We actually like the look of the Series 1 dashboard, its a bit different to the ones we are used to seeing.

With the classic car market shifting towards collectors cars from the late 1970s and the early 1980s, this VW Golf GTi Mk1 Series 1 fits right into that category. It does look very good in the photos but we’d want to give this one a very careful examination if we were buying (and boy do we wish we were buying it). The Mk1 Golf can rust just about anywhere from the wheel arches to the inner wings, boot well, fuel filler pipe and the boot weather strip area. The fact that this one was rust proofed from new gave it the best chance to survive which it obviously has.

With the engine having covered 135,000 miles, we’d keep an eye out for smokey cold starting and listen out for any tappet noises. The engines themselves are strong units but we’d want to make sure this one isn’t worn or tired. It would also be wise to check the gearbox for the classic 2nd gear crunch from cold. Given the rarity of the Series 1 we’d like to see this one returned to show standard. This would mean detailing the engine bay, sorting the broken speedo, correcting the paint issues, re-trimming the seats (where required) and fixing the broken lighter, for the sake of being thorough. This VW Golf GTi Mk1 Series 1 would suit an enthusiastic Golf collector and it would be the centre of attention at any VW show or meet. We don’t expect this one to hang around for very long.

This VW Golf GTi Mk1 Series 1 is located in Chorley, Lancashire and the asking price is £7,995 which is open to offers.