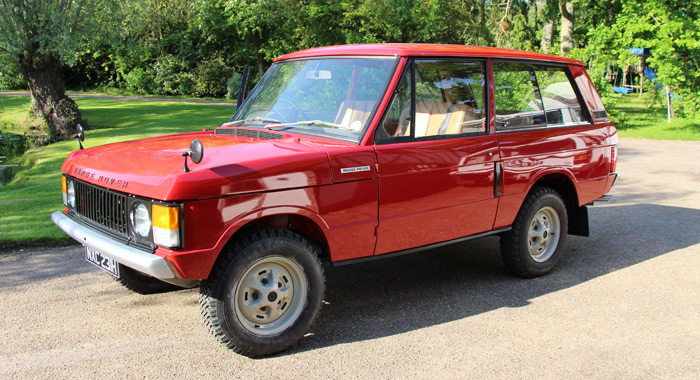 The 1970s was a very difficult time for the British car manufacturing industry. British Leyland was struggling with industrial action, quality control issues and intense competition from overseas competitors. There was one glimmer of hope however and that was the Range Rover.

In 1967 the first prototype Ranger Rover was built with the new model launching in 1970. It caused such a stir that the Musée du Louvre in Paris exhibited the new 4×4 as an “exemplary work of industrial design”. The rest as they say is history with the Ranger Rover going on to be one of the all time great class leading 4×4 models ever built.

The Range Rover on offer is chassis number 026 and is a two door model. It was the first of the 1970 press built cars which were produced after the initial pre-production run. The listing states that it was registered on 27th May 1970 which suggests it is the first actual registered Range Rover.

All twenty pre-launch models were actually badged “Velars” so as to hide their identity during development and testing. Chassis number 026 is described to be in excellent condition having received a nut and bolt restoration. It retains many pre-production features such as the rare and desirable aluminium bonnet. New front seats were sourced with the rear seats still in original condition. The seller also notes that it has been the subject to numerous magazine features which is hardly surprising given its importance.

With interest in early production Ranger Rovers on the rise, chassis number 026 is a very interesting investment opportunity. It looks very smart in Masai Red and the interior appears to be immaculate. It is easy to forget how spartan the inside or the original Range Rover was when it was launched. Despite this it was classing leading for it’s time and revolutionised the 4×4 market.

We feel the asking price of £200,000 is quite high (as seen on the eBay listing). Chassis number 001 sold for £132,250 at Silverstones Salon Prive Auction in September 2014. The pre-auction hype for 001 suggested it would achieve £250,000 but this never materialised. Regardless of the price, chassis number 026 represents the chance to own a piece of British automotive history. It would make a superb addition to any collection. You’d probably never want to take it off road though.

Chassis number 026 is offered for sale by Honychurch Classic Automobiles in Kent. More details including a short video can be found here.