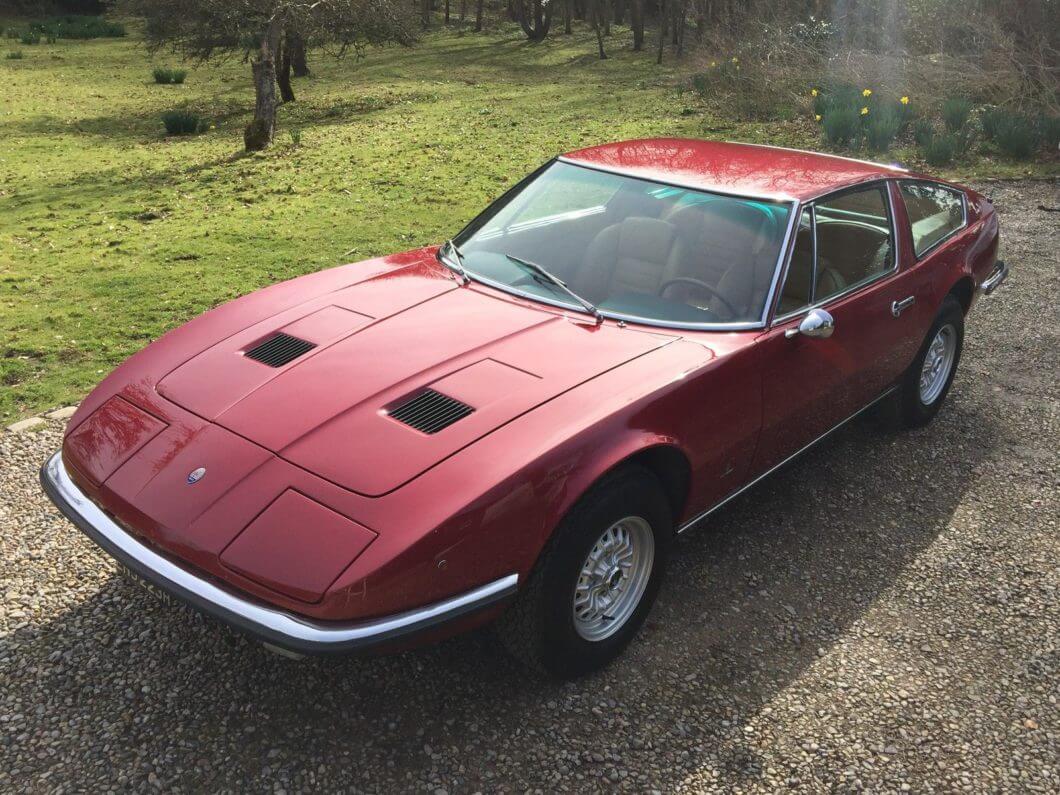 Launched in 1969, the Maserati Indy was a replacement for the ageing six cylinder Sebring. Designed by Giovanni Michelotti while at Vignale, it was named to honour Maserati’s victories at Indianapolis in 1939 and 1940. The aerodynamic 2+2 Indy debuted with a 4.2ltr V8 which produced 290BHP (later model Indy’s were offered with the 4.9ltr V8 which produced 320BHP) which was mated to a ZF 5-speed gearbox or the optional 3-speed Borg-Warner automatic. It had an independent front suspension with double wishbones, coil springs and an anti-roll bar. At the rear Maserati used a live axle on leaf springs which also had an anti-roll bar. Servo assisted and ventilated disc brakes were standard all round with power steering and a limited-slip differential available as optional extras. Thanks to it’s aerodynamic design which gave the illusion of a two seater car, the Indy had a high tailgate which allowed more room for rear seated passengers and gave it a respectable boot.

The Maserati Indy on offer is a 1970 model with the 4.2 V8 and the early two binnacle style dashboard. Originally supplied new in Italy, it was imported to the UK in 1988 and was acquired by the current owner in 2010. It has under gone a major refit with the V8 receiving a full strip down and rebuild. Other extensive works included overhauled carbs, new fuel lines, overhauled radiator and new cooling hoses, new clutch assembly and a rear differential overhaul to name just a few. The engine bay was cleaned and detailed and a new quilted apron was also fitted, resulting in what the seller describes as a concours standard engine bay.

The body work is described as being in fine condition with no rust or dents. Some stone chips are noted on the front valance but these will be fixed before sale. The Indy’s rare and difficult to obtain stainless steal trim work and badging is described as being in excellent shape with no dents or marks. Its five Borrani wheels have also been refurbished and restored. The interior is said to be completely original with the exception of the carpets which were replaced in 1990. The seller also notes that along with a collection of rare documents, this Maserati Indy comes with a large history file dating back to 1988 plus the original owner’s handbook and a very rare Vignale Indy colour swatch.

Finding a Maserati Indy in this condition is a rarity. It looks to be in excellent condition with the Rosso Rubino colour looking wonderful on Michelotti’s masterpiece. Maserati were on a roll in the 1970s thanks to the Ghibli and while the Indy has lived in it’s shadow for some time, it’s one of our favourite Maserati’s. It has a wonderful silhouette and while the rear end looks a little high and square, it doesn’t stop us from wanting to own one.

The engine bay is one of the best we’ve seen and truly looks concours. It is a major plus that the engine has been rebuilt on this Indy as Maserati V8s are costly to repair if something goes wrong. A rebuilt motor is one less worry for the new owner. Another plus is that it is said to be rust free, a typical enemy of the 1970s Maserati. On the inside the interior does have a few marks and signs of wear but it is original. We’d leave it as is and not have it re-trimmed. With a practical boot, room for passengers and that wonderful sonorous V8 that loves to rev, this Maserati Indy ticks all the boxes for us. It would make the perfect GT car for a dash to the south of France.

This Maserati Indy is located in Battle in East Sussex and is offered for sale by Mr Speedlux Classic GT Cars. The asking price is £59,995.

More details including a detailed selection of photographs can be found here on Mr Speedlux’s website.