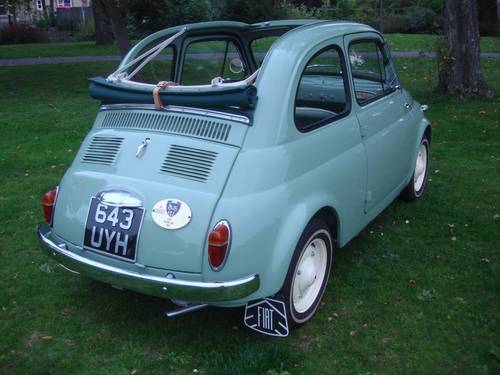 The Fiat 500 is one the all time great classics and one of Fiats most successful cars of all time. Launched in 1957, the Fiat 500 Nouva was the perfect small car for city dwellers. It was cheap to own and easy to maintain and like the VW Beetle, it introduced motoring freedom to the masses. Powered by a tiny two cylinder 479cc engine producing just 13BHP, the Fiat 500 may have lacked power by today’s standards. However its diminutive size and feisty little engine made it very nimble and agile, perfect for narrow Italian city streets. One of the unusual features of early series Fiat 500s were their fixed side windows or “vetri fissi”, hence the designation “Fiat 500 Vetri Fissi”. Both driver and passenger doors basically didn’t have wind down windows, with ventilation available from the little quarter windows instead. When production came to an end in 1975 over 3.5 million had been built, proving the success of the baby Fiat.

The car on offer is a very rare 1957 Fiat 500 Vetri Fissi and is said to come from one of the most important Fiat 500 collections in Europe. This desirable Nouva series is described as being in concours condition and was subject to an extensive two year restoration. It still has its original 479cc engine which is very rare to find on a Fiat 500, especially on a Nuova series.

It is finished in Verde with a green interior and has the iconic convertible roof (which makes up for the lack of opening side windows). It also has the desirable and sought after single speedo, all metal dashboard and retains it’s dash mounted model plate. The listing notes that it comes with its original registration plates, very rare original owner’s and service instructions, as well as a certificate of accreditation from the A.S.I. The listing also states it is one of only twenty five known Fiat 500 Vetri Fissi to survive.

This Fiat 500 Vetri Fissi is a superb collectors car. Thanks to a large and loyal fan base, there are thousands of classic Fiat 500s still on the road today. However there are very few series one Fiat Nouva’s left which is what makes this Vetri Fissi so exceptional. With the suicide doors, round speedo, roll back convertible roof and the fixed windows, the Fiat 500 Nuovo is considered by many to be the purest of all the 500 series. The restoration looks to have been carried out to a very high standard, which is what you would expect for such an important early series model.

We love suicide doors in general on any car but they have always been particularly suited to the Fiat 500. The convertible roof adds an extra element of fun to this already fun filled car. We find it refreshing to see such an early car in its original specification that hasn’t been subjected to an Abarth replica conversion.

After some research we believe that this Vetri Fissi was sold at RM Auctions Monaco sale in May 2014. That car sold for €30.800 and while it would need verifying, we do believe this is the same car. With so few Fiat 500 Vetri Fissi series cars left, this would make a superb addition to any collection. And with a concours standard restoration, this car will be guaranteed an invitation to some of the best concours events. It will also be the most cheeky and characterful car there for sure.

This Fiat 500 Vetri Fissi is located in Melksham Wiltshire with no asking price given. More details can be found here on Carandclassic.co.uk.

Details on the RM Auctions May 2014 sale can be found here.