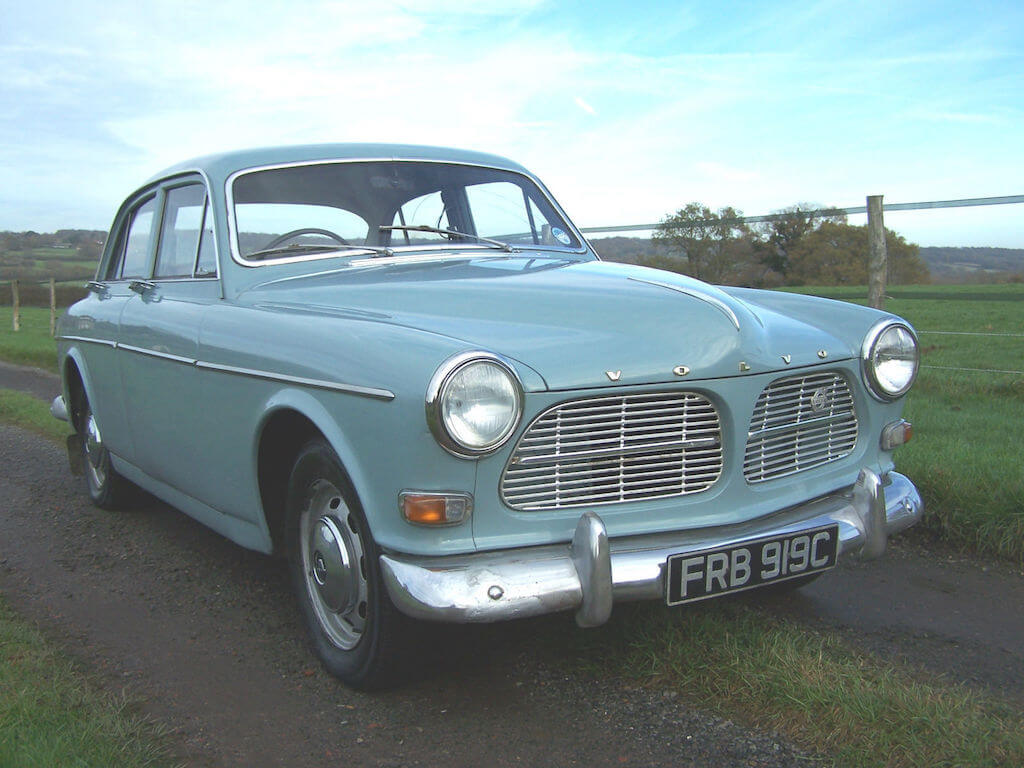 Few classic cars stand for ruggedness and reliability as well as the Volvo Amazon. Launched in 1956, the mid sized saloon helped cement the Swedish car builders reputation on the international stage. Bearing a striking resemblance to the Chrysler 300 (though apparently inspired by a Kaiser), the Amazon was offered in four and two door guises. The rear wheel drive saloon debuted with the B16A 1583cc engine which produced 60BHP and was mated to a 3 speed manual transmission. This was upgraded to the B18B 1778cc engine in 1958 and thanks to twin carbs, power was increased to 85BHP.

The Amazon quickly gained a reputation as a potent rally car and in 1961, the new B18D engine pushed power output to 90BHP. In 1966 the Volvo Amazon’s sporting credentials were further enhanced with the introduction of the 123GT. Using the same B18B engine as the Volvo P1800, the 2 door GT now had a very respectable 115BHP which was mated to a four speed manual overdrive gearbox. In addition to the cars increased performance, the Volvo Amazon demonstrated the firms increasing focus on safety. In 1958 front seatbelt were fitted as standard and in 1967 a collapsible steering column was introduced. Crumple zones were also added to the Amazon to improve occupant safety. Over half a million Volvo Amazon’s were built by the time production came to an end in 1970.

The Volvo Amazon has been a favourite of classic car enthusiasts for some time. The fact that they were well built, reliable and very sporty in twin carb B18B guise has a lot to do with its popularity. We also think its a good looking car. Taking some styling cues from the Chrysler 300/Kaiser was a good move by Volvo and added a sense of class and sophistication to the practical saloon.

The 1965 Volvo Amazon 121 we have spotted for sale presents itself as a very clean example. Said to be very original and having had just two owners from new, it has covered 83,000 miles. It is said to drive very well and is mechanically in good order. The seller describes the bodywork as being very presentable with some minor marks. Three of the four chrome bumper corners are stated as being poor.

On the inside the listing states that the interior is all original and in excellent condition. There are no cracks to the seats or the dash top and the headliner is believed to be original. The original rubber floor mats are also in good condition. The seller notes that the original factory fitted front seat belts are installed and inertia reel belts have been fitted in the rear.

We’ve always liked the Amazon. Our favourite feature is the front grill and we think the similarity to the Chrysler 300 is a good thing. While it is a much more reserved car looks wise compared to the Volvo P1800, the Amazon is still an attractive car and they make great starter classics. We like the simple interior and the long throw gear lever. This 121 Amazon looks very clean indeed and actually shares its colour with the Volvo P1800 we filmed last year (watch our film here).

The bodywork on this P120 does look very straight with the only visible issues being the bumpers which the seller points out and some rust on the front grill. The interior looks very good indeed and if it is all original, it shows that the car has clearly been looked after. The low ownership has certainly helped in keeping this car in good order. The engine bay and boot also look presentable. We assume this 121 is running a B18D engine with a single carburetor and we expect it is fitted with a four speed manual.

While Amazon’s have a reputation for rugged reliability they can rust so we would want to check the usual problem areas such as the front wings around the headlights and bottom door skins. We’d want to inspect the underside as well for any rust on the chassis and floorpans. The sills can also rust on these but many actually left the factory with galvanised sills, so it is not always a major problem spot. The engines in the Amazon are very robust as are the gearboxes and can go on forever if serviced regularly.

Assuming all is well we think this Amazon 121 would make a great driver. It looks to be a nice honest example of the Swedish marques game changing saloon and the original interior is a major plus. If we were buying this car we would get the chrome bumpers fixed and upgrade the engine to twin carbs and fit a twin exhaust for a bit more grunt. An uprated fast road cam is also an option for those wanting to replicate the performance of the 123GT. Apart from that we’d keep it as it is and just drive it. With an asking price of £4,500 we think this Volvo Amazon is priced fairly for its condition and coupled with a long MOT with no advisories, it would be an ideal choice as a first classic for the young enthusiast.

This Volvo Amazon 121 is located in Burwash, East Essex and is offered for sale by AR Cars. The asking price is £4,500.

More details and photos can be found here on eBay.