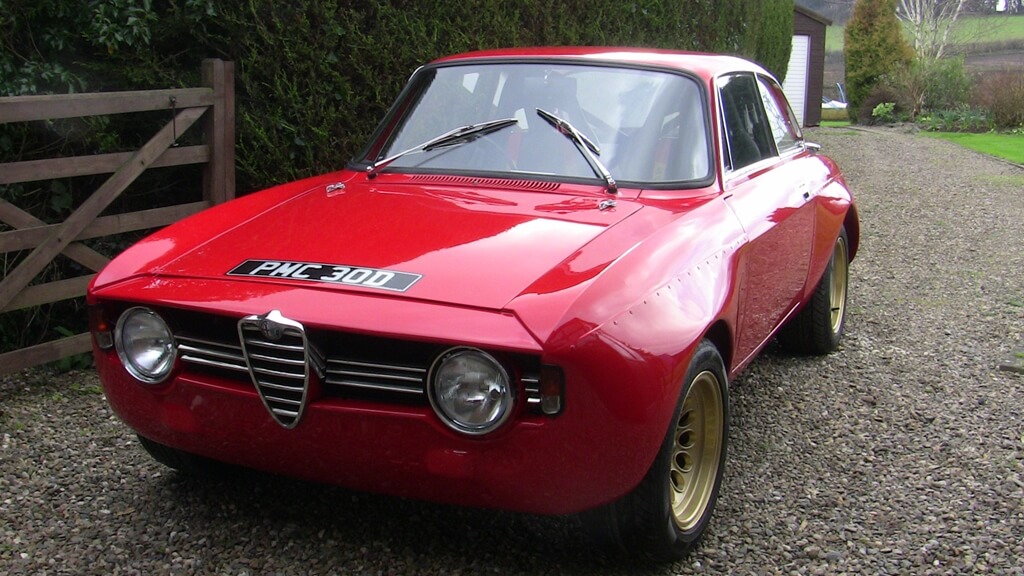 This coming weekend we will be attending Classics Central Auctioneers May Sale at Bedford Autodrome. A total of 72 vehicles have been entered and one of the cars that caught our eye in the catalogue was actually one we featured back in August last year. And that is this exceptional looking 1966 Alfa Romeo 1600 Sprint GT.

When we first spotted this car last year we were impressed with the apparent high quality build and the impressive spec list. Plus it is a Bertone Stepnose Sprint GTAm evocation. So it looks absolutely awesome. If ever there was a car to get the juices flowing it is a fast road spec Alfa finished in red.

We cannot wait to see this Stepnose in the flesh this weekend and we’ll try and get as many photos as we can (stay tuned for updates on our Twitter, Facebook and Instagram accounts) .

More details on this Alfa Romeo 1600 Sprint GT can be found here on Classics Central’s website.

If there is any car thats gets a true petrolhead excited and weak at the knees, it is an Alfa Romeo Sprint GT, especially in FIA spec. Launched in 1963, the “scalino” or “step front” Sprint GT re-vitalised the marque thanks to its gorgeous looks, superb handling and easy to tune engine. The engine was the lively Alfa 1570cc twin cam four cylinder engine that produced between 80-110BHP, depending on carb setup. Power was sent to the rear wheels via a five speed transmission and Dunlop disc brakes were standard all round. The whole package, combined with a weight of under 1kg, meant that the Bertone designed coupe was very popular, especially for those wanting a spirited drive. Over 31,000 were sold between 1963 and 1966.

Offered for sale on behalf of the current owner is a 1966 Alfa Romeo Sprint GT which has been subject to a full restoration. This UK market model retains its original 1600 engine and has been rebuilt to full FIA specification. The body was stripped with new floor pans added, along with GTA wheel arches and a fibreglass boot and bonnet lid. A new windscreen was also fitted.

The engine has been rebuilt to standard specification. The gearbox, rear axle, brake system, and suspension were also stripped and rebuilt. Gold 8×15 alloy wheels with new tyres were also added. FIA spec additions include a Sabelt 4-point harness (x2), Safety Devices Roll cage, Competition Cobra seats, Alloy internal trim paneling & Perspex windows, an Alloy fuel tank and a plastic battery box (which has been re-positioned to the boot). The car comes with an MOT and is road legal.

This Alfa Romeo Sprint GT looks so good we want to repeat our opening sentence again. For the moment we will restrain ourselves. As evocations go, this one looks the part and we expect it sounds the part as well. We have always had a thing for any 1960s Alfa Romeo that has been given the GTA spec treatment. They look aggressive and purposeful while retaining the elegant beauty of the original Bertone design. While the standard step front/nose GT has a good stance, the addition of the GTA arches and the Gold GTAm wheels really beef up its appearance. Its a fantastic combination of aggression and character for the scalino coupe.

From the details provided this one has had a comprehensive rebuild and it is nice to see one running its original 1600 engine. So many Sprint GTs have been customised over the years, being fitted with the larger 1750 and 2000 series engines. It is therefore refreshing that this one is supplied in standard spec in the engine compartment. Everything on the car looks new and spotless and the red paint looks superb. The interior looks great with the classic forward mounted gear stick retained along with the Alfa steering wheel and dashboard.

We also love the fact that this one is road legal. While we probably wouldn’t drive it to the track, race it, then drive it home, it would be the perfect race spec car to take to a show. In many ways it is rather appropriate for us to feature this Alfa Romeo Sprint GT right after we published our Prescott Hill Climb film yesterday. In that article we mentioned wanting to create a race/hill climb spec Bertone x1/9. We’d like to add that this GT would be our ideal choice, if funds allowed. This Alfa Romeo Sprint GT would make an ideal track/hill climb car and given the condition and the work done, we don’t think it will be available for very long. Did we mention it looks good? Ok we’ll shut up now.

Check out this rather special 1975 Alfa Romeo Montreal