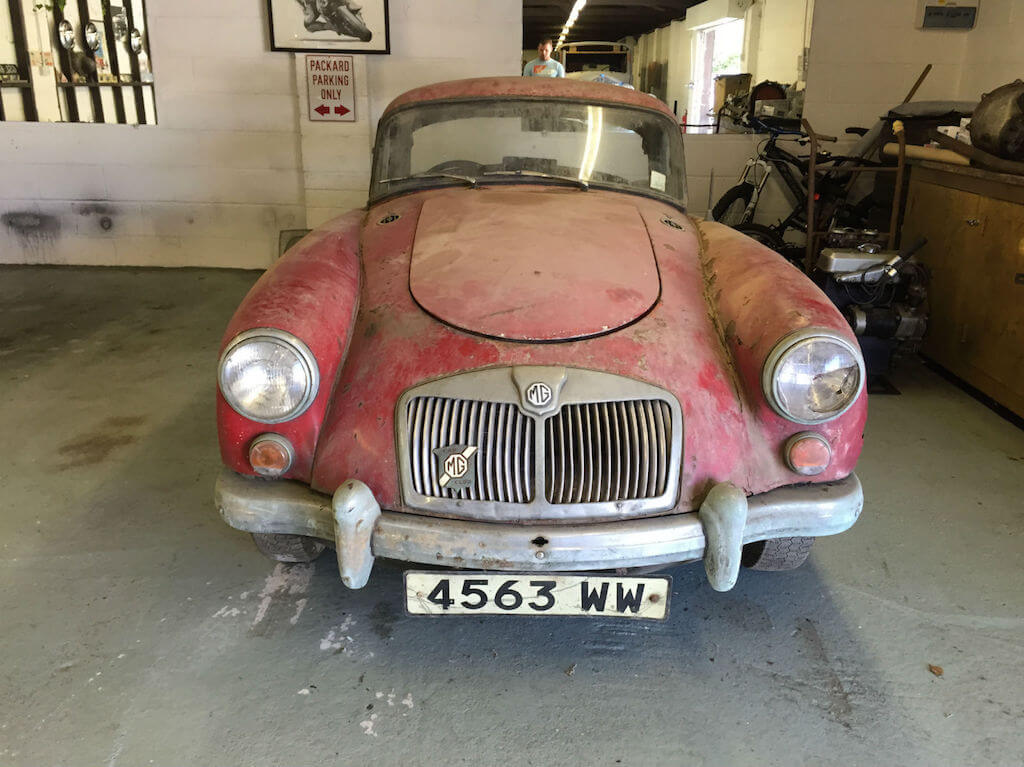 The MG MGA is one of the most beautiful British sports cars ever created. There is a wonderful elegance to its lines and its low slung profile gives its a real sporting look, both in roadster and coupe form. When launched in 1955 at the Frankfurt Motorshow, the new two seater sports car replaced the ageing MG TF which had stayed in production for 19 years. The MG MGA represented a radical change in direction for the British firm as it looked to break the connection with its older pre-war models. The recipe worked to a degree with with 90% of the new models total production exported from the UK.

However sales in the home market never lived up to expectations and the arrival of the more powerful 1588cc twin cam engine in 1958 added more problems. While the new engine increased power from 68BHP to 108BHP, giving it a much needed performance boost, it proved very unreliable. Sales never really took off and production of the promising MG MGA ended in 1962.

Despite the issues with the twin cam engine, you can’t deny that the MGA is a pretty car. Which makes them very desirable today. As a result it is becoming harder to source unrestored examples which makes the barn find 1960 MGA Coupe we’ve spotted for sale all the more interesting. This MG MGA Coupe is a rare right hand drive model that was last on the road in 1975. The listing states that the car still has its tax disc from 1975 and comes with a Shell service history book which seems to verify its low 40,162 miles. The seller states that the car does need restoration but is all there.

The MG MGA is one of our favourite cars and we love the convertible. We also equally love the coupe as it adds to the bodies already curvy lines. It also bears a resemblance to the Jaguar XK140 Coupe, which in itself is no bad thing. Over all this car looks well preserved after spending 40 years in hibernation. During that time the body has suffered from the usual MG rust and anyone familiar with the MGA knows they like to rust. The worst of it appears to be around the rear right side wheel arch. And it looks like the rear window is missing. There also appears to be a seam of rust along the left side wing/bonnet join which will investigating and the front windscreen bottoms look like they will need attention.

On the plus side the bonnet, boot and door skins on the MGA are made of aluminium so at least the prospective buyer can tick those off the rust check list. As this one has stood for some time it would be wise to check the underside paying attention in particular to the front and rear fenders and rocker panels, which are know weak points. They also like to rust around the battery tray. All the chrome trim appears intact and in place which is another plus and it is sporting steel wheels rather than wires.

On the inside the interior also appears to be all there. The steering wheel covering has split but apart from that the dashboard looks ok. The previous owner added 3 gauges under the dash. Its not easy to make out in the photo but one is for temperature and the other for the battery, we think.

The engine bay is pretty tired and the seller doesn’t mention if it is seized or if it turns over. So it’s safe to assume it will require a full rebuild. The cars last tax disc is from 1975 so it may have had engine trouble when parked up. As this is a 1960 model it suggests that this car has the 1600 engine which is a lot less complicated to rebuild than the notorious twin cam. Which will help keep restoration costs down. Bearing in mind the additional gauges added under the dashboard, we’d want to treat the engine to full rebuild really to be on the safe side.

Overall this MG MGA Coupe presents as a very worthwhile restoration candidate. We particularly like the original Shell Service book which shows that the owner payed particular attention to the car, noting every fuel fill up and the cars mileage. Its quite rare to come across a detailed history like that. This one will require a full strip down restoration which won’t come cheap. But on the plus side there is an excellent parts supply for these cars which is backed up by an enthusiastic owners club.

One of the photos provided by the seller shows a letter which suggests that an attempt was made in 1990 to register the car. So it is likely the log book was misplaced and the DVLA doesn’t hold the registration on record (according to their website anyway). The new owner would need to bear this in mind as it could prove to be a headache. With restored examples fetching between £20,000 to as high as £50,000, this one is priced well considering its condition (we featured a restored white MGA Convertible back in March which will give you an idea of how good they look done well). A full restoration could easily swallow £20,000 by itself but with the cars history, low mileage and the fact it is RHD, it would be worth the investment. We doubt this one will be available for too long.

This MG MGA Coupe is located in Brentwood, Essex and is offered for sale by Day Autos. The asking price is £6,750.

More details and photos can be found here on eBay.