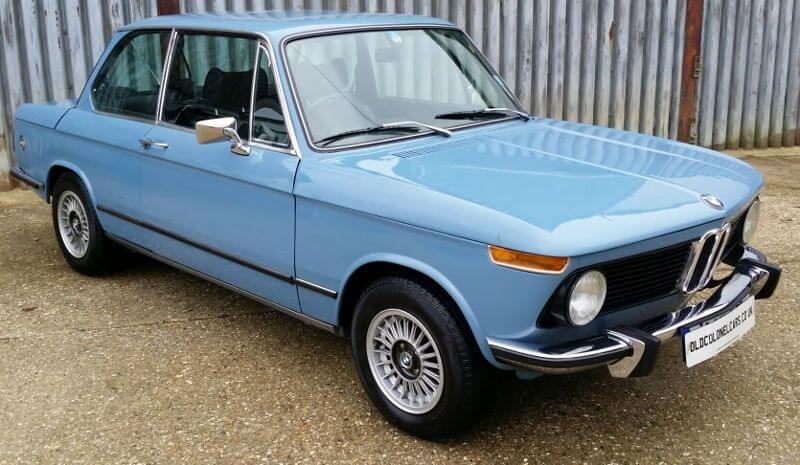 We recently featured a restoration project 1975 red BMW 1502 as one of our Top 5 Tax Free Classic Cars 2015 Budget article so we won’t go through the model history but rather just jump right to our latest feature.

The BMW 1502 on offer is a 1975 model (so will be tax free under the new rules) and spent much of its life on Jersey. It is fitted with the 1573 cc 4 cylinder engine which has covered 87,000 miles. It is described as being in excellent condition and was Best in Class winner at the BMW Club Show in Gaydon in 2013.

Finished in Pastal Blue it comes with the rare factory sun roof. It is said to start on the button and drive very well, having been well looked after by its owner of twenty two years. It comes with a large history file and has recently had a complete brake overhaul. The seller notes it comes with a one months parts and labour warranty.

We’ve already said before that we like the BMW 1502. They are our favourite 1970s BMW and this one looks like a lovely, well cared for example. The Pastal Blue is a gorgeous colour on the car and it looks very fresh and bright. The interior is in excellent condition and doesn’t look like it has covered 87,000 miles. We assume the radio aerial on the boot is a factory option as we haven’t seen it on many 1502s or 2002s before, though it could be an after market fit.  The car looks so fresh it is a real testament to the original owners care and attention. Which is the general impression for the rest of the car which has developed a nice patina rather than looking over restored.

As a two door saloon, the 1502 is a very smart car and the alloys give it a more sporting look. The clean lines and chrome delicately enhance the two door saloon shape, our favourite part being the front round headlights and grill.

At £13,995 the price reflects the condition of this rare car and is an indication of the level the BMW 1502 has reached over the years. It presents itself as a solid investment and an enjoyable looking one at that. We hope the new owner of this BMW 1502 will continue to use and show the car rather than turn it into a garage queen. It looks too good for that.

This BMW 1502 is located in Hatfield in Hertfordshire and is offered for sale by Old Colonel Cars. The asking price is £13,995.

A video of the car can also be seen here.