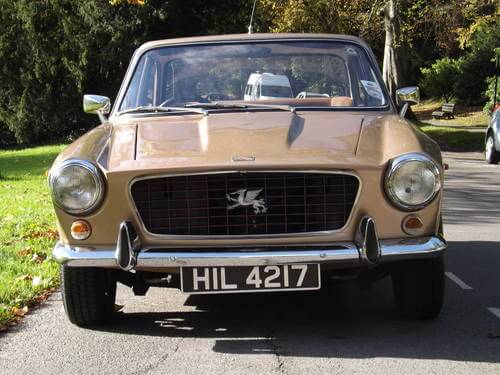 Gilbern was one of the few car manufacturers to originate in Wales. Operating between 1959 until 1973, they specialised in producing glass fibre based cars and for a time produced some very interesting GTs. One such GT was the Gilbern Invader Mk2. The Invader was launched in 1969 and was based on the previous Genie GT. Engines were sourced from Ford, utilising the 3.0ltr Essex V6. Its 141BHP was sent to the rear wheels via a four speed manual transmission and an auto was also available. Thanks to its light weight fibreglass body, the Invader proved a quick car. In 1970 the Gilbern Invader Mk2 was launched and featured improvements to the suspension.

We’ve spotted what looks like a very nice and rare 1971 auto Gilbern Invader Mk2. The seller describes it as being in superb condition and is a pleasure to drive. Said to have been owned by successive members of the Gilbern owners club, it has a full service history and has covered just 26,800 miles. It is finished in Rolls Royce Gold and is fitted with a matching interior. A new battery and alternator has been installed along with an electronic fuel pump.

We’ve always liked the Gilbern Invader Mk2 and think they are interesting cars. Like many fibreglass built cars of the era, they were a collection of parts from numerous manufactures that came together to make a cool GT with a sweet sounding V6. This particular example looks like it has been well cared for and previous club ownership is always a good sign. If we were in the market for a rare Welsh built and designed motor, we’d definitely check this one out.

More details can be found here on Carandclassic.co.uk