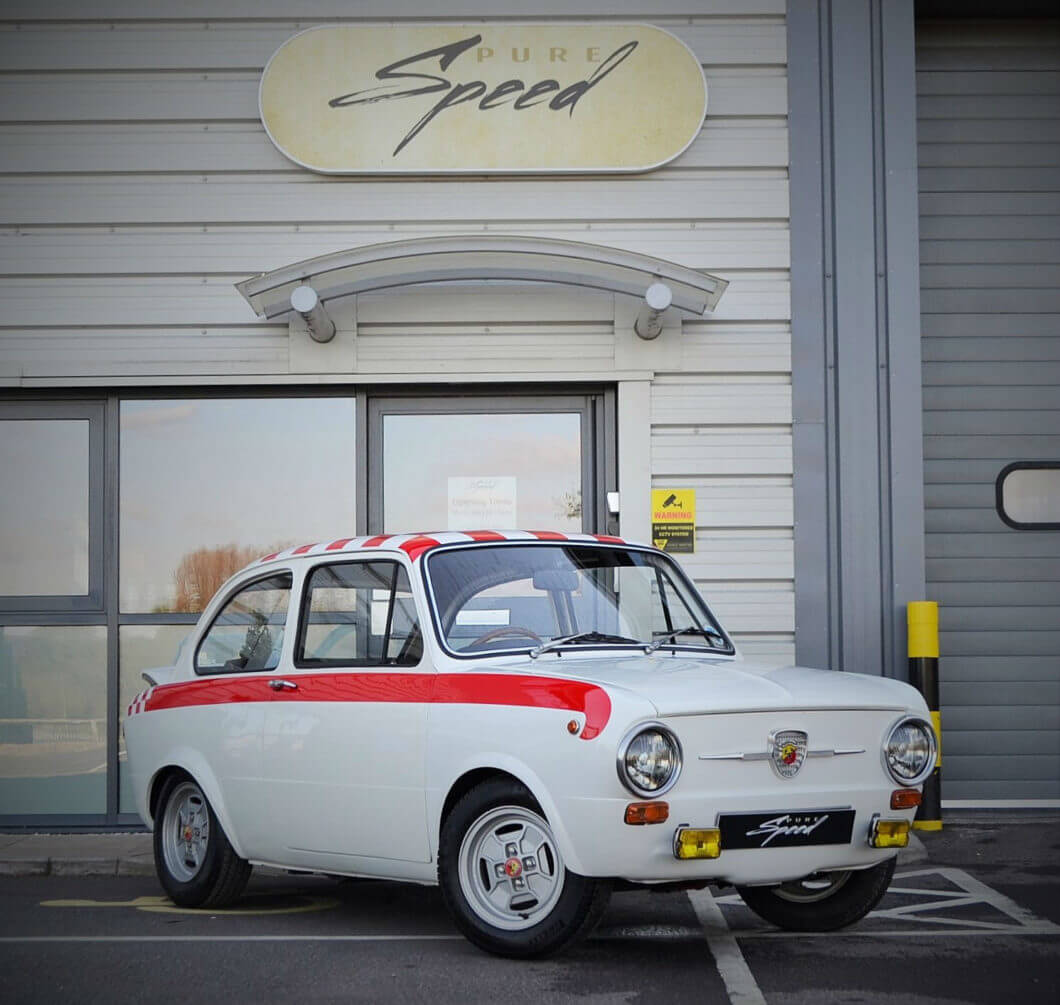 Following on from the success of the Fiat 600, the Fiat 850 series was launched in 1964. Fiat successfully employed the same floorpan and suspension setup in the 850 series, carrying over many components from the 600 series. This helped reduce costs and allowed Fiat to offer a Berlina (saloon), Coupe, Spider, Familiare (estate) and a Furgonata (van). The flexible body styles continued the water cooled rear engined format, utilising the 843cc four cylinder engine. This produced 40BHP in Normale (standard) guise and 42BHP in Super (sport). While the Fiat 850 saloon lacked power, it made up for this weighing in at only 670kg. The light weight body, combined with an independent suspension and a four speed transmission, made the 850 a nimble car which added greatly to its over all charm. Its light weight also helped the 850 get away with drum brakes all round. And it proved the perfect platform for the creation of the Fiat 850 Abarth.

In 1968 the compact two door saloon was revised as the Fiat 850 Special and received the larger 903cc 52BHP engine from the 850 Coupe. Front disc brakes were also offered to cope with the increased power. The trim level was also improved and a sports steering wheel was offered. As was customary of the time, Karl Abarth applied his tuning skills to the 850 series, resulting in the Fiat Abarth OT 1000 Coupe and the Fiat Abarth OT 1000 Spider. With 60BHP squeezed out of the tiny four cylinder engine, they proved a very potent package. Similar upgrades were applied to the Fiat 850 but these were only prototypes and there was no production model Fiat 850 Abarth based on the Berlina/Special saloon.

There was indeed a Fiat 850 Abarth but this was based on the earlier Fiat 600 and was designated 850 TC (Turismo Competizione) by Abarth. Production came to an end in 1972 with over two million produced, its success laying the foundations for the new Fiat 128 which would go on to be one of the most successful Fiat’s of all time.

Offered for sale is a 1969 Fiat 850 Saloon which has been given the full Abarth treatment and is described as a full nut and bolt Abarth recreation. Finished in white with Abarth red livery, the build spec is impressive. The engine has been rebuilt by renown Abarth and Fiat experts Middle Barton Garage. Upgrades included new pistons, Nardi Aluminium Sump, Hausermann Fly Wheel, Trigger Timing Belt and a new Weber 36 DCD Carb 14/fF23R. An Abarth exhaust has also been added. The wheels have been updated to a rare set of Abarth 13” alloys which wear new Pirelli tyres. On the inside it has been fitted with a new black interior with red piping. A set of 850 Coupe Dials and a three spoke wooden steering wheel complete the sporting look. The listing states that this Fiat 850 Abarth outperforms the original Abarth’s from the same era.

We’ve always had a soft spot for the Fiat 850 Saloon. Its curvy shape, round headlights and stumpy rear end, give it a lot of character. We actually got to drive one last year and found it a really fun drive. While its tiny engine didn’t pack a huge punch, it was surprisingly nippy in 3rd gear and it handled really well. This Fiat 850 Abarth recreation must be all that multiplied by 100! We like the fact that this example is right hand drive making it a rare survivor (assuming it is a UK survivor).

The red on white look is very smart and works well on the saloon shape, with the alloys setting it off very nicely. The obligatory Abarth badges and decals look good and there is no escaping the cars intent with the raised engine lid. This detail on any Abarth rear engined Fiat always makes us smile and we always chuckle a little when explaining what its for to those who’ve never seen one before. Because they can’t quite believe it helps cooling. The engine bay itself looks very clean with lots of new parts visible. The Abarth exhaust has been heat wrapped which should help with cooling the cramped engine bay.

The interior is typical Fiat minimalism. The new trim contrasts well with the paint job and the wooden wheel and upgraded dials give it much more of a sporting look. Personally we’d lose the skull head gearstick and replace it with a more traditional round ball, but thats down to personal tastes. Overall we really like this Fiat 850 Abarth recreation. Its the kind of build we would do if we got our hands on a stock 850 Saloon. Given the asking price we’d give this one a good look over to check the engine runs well and that the suspension and brakes can deal with the increase in power.

The listing doesn’t mention if the clutch or transmission have had any upgrades so that would need checking as well. And we assume it is sporting new disc brakes. It also looks like there is a bit of paint chipped on one of the arches and there is a bit of wear evident on the steering wheel. However these are small details on what looks like a nice build. And some investigative digging has turned up what we think is the same car featured in a series of articles on the Cherished Vehicle Insurance website (five articles in total). There’s no way to be 100% sure it is the same car and it is missing the Abarth scorpion on the bonnet, but it looks and sounds like the same spec 850. If it is the same car then it gives a nice bit of background to the restoration work.

More details on the restoration of that Fiat 850 can be found here. So to summarise, this Fiat 850 Abarth would make a fun track day car and would be a blast to drive on any classic car run. We wouldn’t mind having a go in this one!

This Fiat 850 Abarth is located in Knaresborough and is offered for sale by Pure Speed. The asking price is £17,495. More details can be found here on the Pure Speed website.