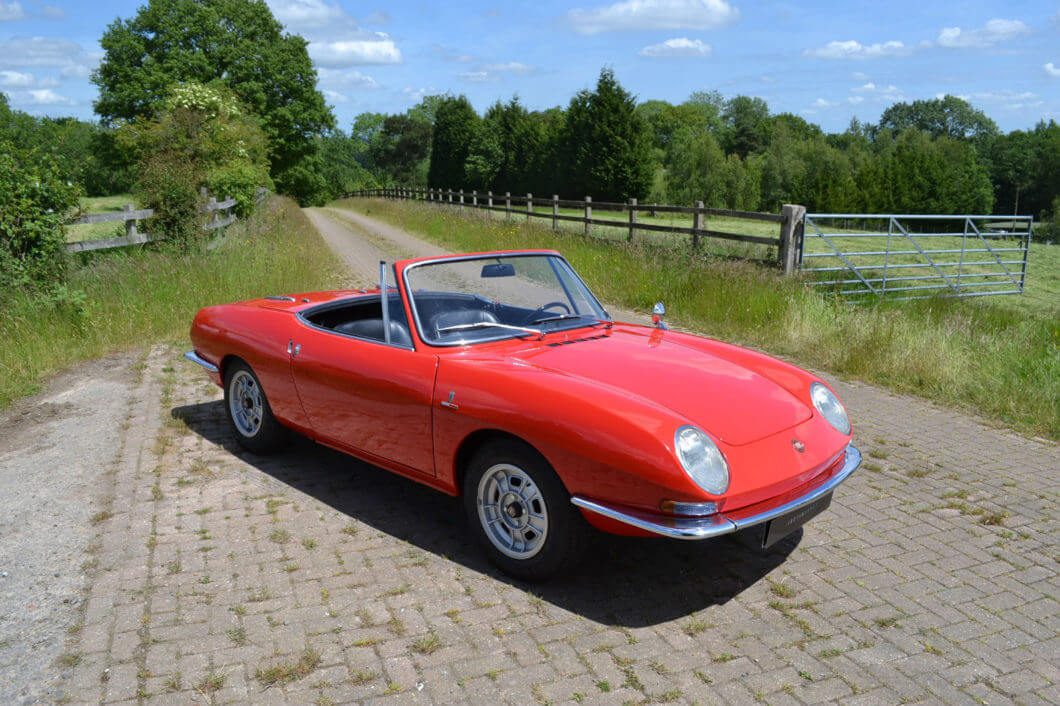 The Fiat 850 Spider was the open top companion to the Fiat 850 Sport Coupe and was launched in 1965 at the Geneva Motorshow. While the Sport Coupe was styled by Boano, the 850 Spider was penned by Bertone. The elegant lines were matched to a rear mounted water cooled 843cc engine which produced 52BHP. Power was sent to the rear wheels through a four speed transmission and thanks to its independent suspension, the 850 was a light and nimble car to drive. Bertone’s design focused heavily on keeping the lines of the 850 clean and simple.

Early models featured slim chrome bumpers without over riders. The headlights were covered by plexiglass which allowed them to follow the flow of the wings. And the convertible top was stowed under a covered flap, again keeping everything neat and tidy. The Fiat 850 Spider proved popular in the US, combining elegant good looks with nimble handling and excellent economy. The Spider was eventually replaced by the Fiat x1/9 in 1972 which combined the coupe and convertible into one package.

Offered for sale is a very rare 1967 left hand drive Fiat 850 Spider S1. Described as being in excellent condition, it was the subject of a two year restoration in Italy. This comprised of a full body and interior restoration and an engine rebuild. The seller states that it drives like new and is surprisingly comfortable over long distances.

We have to admit we do have a soft spot for old Fiats. Owning a Bertone x1/9 means we are slightly biased of course. That ownership however, has been a bit of an eye opener into the rich and diverse history of classic Fiats. We featured a Fiat 850 Abarth Recreation recently which was an example of what can be done with a standard Fiat 850 Berlina saloon. We did mention briefly the 850 Spider in the model lineup for that article and now we have the opportunity to feature one as a comparison.

This Fiat 850 Spider S1 is a beautiful little thing. Bertone’s design really is a example of simplicity and elegance. The slim bumpers and covered headlights are wonderful little details that add a grace to the body lines. And the seller is quite right in mentioning the similarity of the headlights with the Lamborghini Miura’s. We like how Bertone used chrome to a minimum, using it simply to highlight and add a touch of finesse. It is common for convertibles to look good with their top down and slightly ugly with the top up. However with the Spider, it looks great both ways.

As with all Fiats of that era, the cabin is very simple and uncluttered though it is more appointed than the 850 Berlina. The black interior contrasts well with the gorgeous red paint exterior and with the Campagnolo alloys, there is an air of sporty sophistication to this little convertible. We absolutely adore this Fiat 850 Spider and think it is one of the best we have seen for some time.

Where the 850 Abarth recreation is all about speed and pushing things to the limit, the 850 Spider, despite being marketed as a sporting convertible, is the complete opposite. It is an elegant and extremely pretty little tourer and is a wonderful example of the masterful designs of the now sadly defunct Bertone. Given the rarity of the series one Spiders, especially the covered headlight models, it would make for a superb addition to any collection. We can just picture ourselves cruising along a beach side boulevard with the top down and the eager little four cylinder whisking us along. We can dream can’t we?

This Fiat 850 Spider is located in Tunbridge Wells, Kent and is offered for sale by Justin Banks. The asking price is £14,995. More details and photos can be found here on the Justin Banks website.