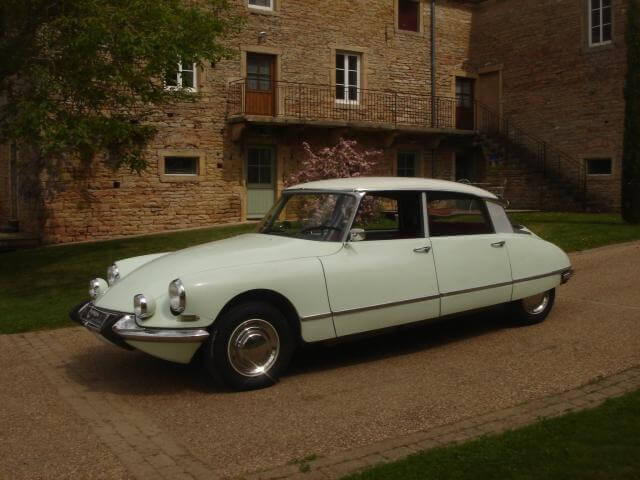 The Citroen DS is without doubt one of the greatest cars ever made. Styled by Flaminio Bertoni and André Lefèbvre, it managed to combine beauty with incredible engineering advancements. Considering the original DS19 was launched in 1955, in a country still recovering from the effects of World War II, it’s technological achievements are even more remarkable. Looking back you could argue that the signs were there in the Traction Avant which was itself an advanced car for the time. Even today the specifications for the DS make for impressive reading. It had front power disc brakes (the first mass production car to do so), hydropneumatic suspension including an automatic leveling system and variable ground clearance, power steering, a semi-automatic transmission, fibreglass roof, independent suspension, inboard front brakes and different width front and rear track and tyre sizes helping to reduce understeer. And this was 1955! Despite being a technological marvel, it has always been it’s looks that have won most hearts. It really is a beautiful car so it is quite fitting that “DS”, pronounced in French as “Déesse”, means “goddess”.

The Citroen DS21 Confort currently on offer is a 1967 model and is described as being in original condition with 55,000KM and has never been restored. There isn’t a great deal of other information supplied except that it is Carrarra White with a red interior. While details are thin on the ground a nice selection of photographs is provided. First of all this DS21 looks to be in really good condition. The white paint looks clean and bright and the red interior really suits the car. It’s not a combination we see very often. The chrome headlights and the rest of the chrome fittings look good and appear to be all there. We actually prefer the open twin headlight arrangement on earlier DS models over the faired in lights of later models. It gives the front end more character we feel.

The interior itself looks to be in very good condition as well. DS seat fabric tends to suffer from wear so the low mileage appears to have preserved this ones, which is good. There looks to be some water staining on the rear right side pillar fabric. It’s possible some water has got in around the window rubbers so it would be worth investigating further to make sure future leaks don’t happen. The superb dashboard, which still has a futuristic look to it, is very clean with no visible signs of wear or damage. Again the famous single spoke steering wheel looks perfect with no signs of wear.

The engine bay, always a very busy looking place on a DS, looks clean though some further detailing would really it shine. Photo number 20 does show what looks like surface rust on the side of the right side rear wing. These wings come off easily so it would be worth a closer look just to be sure all is well there. Apart from some minor paint and trim wear here and there, this DS21 looks to be in excellent condition.

We really love this 1967 Citroen DS21 and with some detailing it would make quite a show car and an exceptional driver. With a mere 34,175 miles on the clock the temptation would be there to not drive this wonderful machine. We think this would be a shame as such a Goddess is meant to be driven. And what a Déesse it is.

This DS21 is located in Tournus in France. No price is given on the listing which suggests it won’t be cheap, given it’s original condition. More details can be found here on classic Citroen Dealer Philippe Losson’s website.