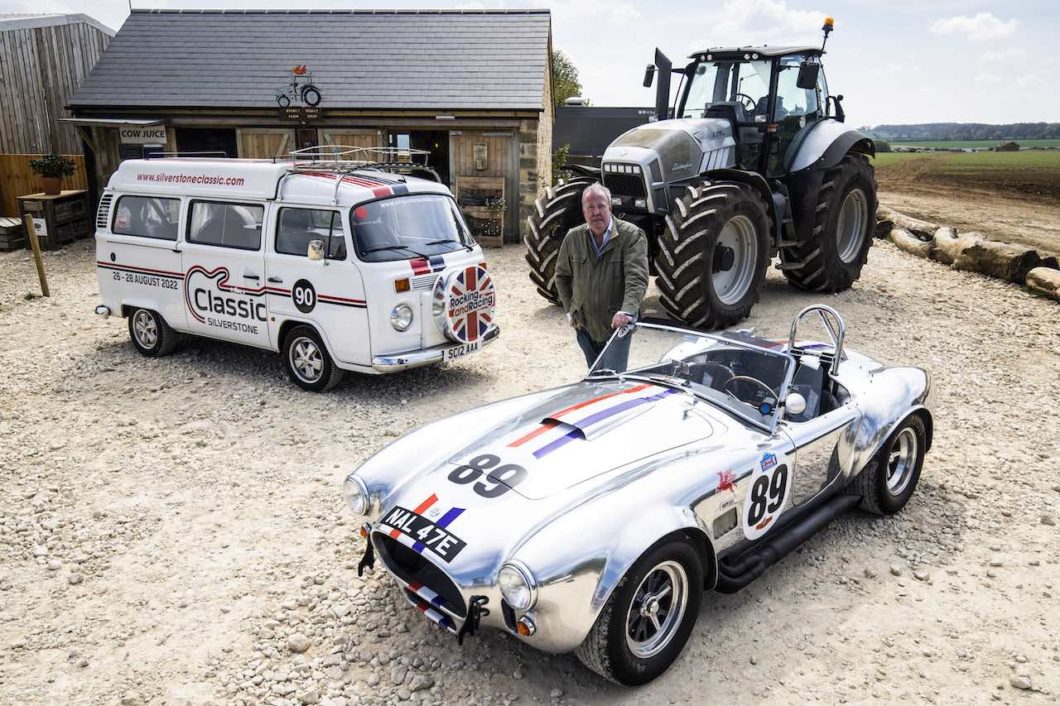 Jeremy Clarkson’s Diddly Squat Farm Shop is heading to The Classic at Silverstone, which is taking place from 26th – 28th August. Set-up in 2020 by star of The Grand Tour, Clarkson’s farm shop is one of the many highlights on Amazon Prime’s widely-acclaimed show Clarkson’s Farm. The shop has achieved cult status drawing huge crowds to the Cotswolds.

A wide range of incredible popular branded merchandise ranging from T-shirts and beanie hats to cuff-links and socks – all carrying an eye-catching motif celebrating the TV show’s big speedy Lamborghini tractor complete with a flaming exhaust pipe – are also available but only via the shop’s website as they are not manufactured locally.

With no such restrictions at Silverstone, all these iconic items will be available via Diddly Squat’s first-ever pop-up outlet at the Classic over the August Bank Holiday weekend.

“We started the little shop in a desperate attempt to sell a large pile of potatoes that we’d produced without really considering the consequences and now it has a life all of its own,” explained Clarkson. “Whether its tractor caps or cow juice [milk!] everyone seems to love what we are selling which helps to justify the day-to-day grind of farming the land. I’m sure all those going to Silverstone will enjoy seeing what we have to offer, and a few may even buy something!”

Clarkson established the shop with his partner Lisa Hogan and she has largely become the driving force behind its flourishing success. Lisa is thrilled to be bringing Diddly Squat to The Classic.

“This will be by far the biggest venture we’ve undertaken to date and we are all very excited to be taking the Diddly Squat Shop on the road to Silverstone,” enthused Hogan. “Jeremy is well-known now in both the motoring and farming worlds, so where better for us to pop-up than within the new Foodie Fest at The Classic.”

Having moved from its traditional date after the Grand Prix in July to a new Bank Holiday date at the end of summer, this year’s festival will offer visitors more family entertainment than ever before. The ‘Foodie Fest’ – now featuring the Diddly Squat Farm pop-up shop – is one of the alluring new additions to the Silverstone bill.

As well as offering an enticing new indulgence at The Classic, the new Foodie Fest will showcase the very best of locally-sourced fare and will be a key ingredient under the festival’s ‘Best of British’ banner.

In addition to the obvious attractions of the Diddly Squat Farm Shop, the culinary experience will also include cooking demonstrations and Q&A sessions with celebrity chefs on the Silverstone Kitchen Live stage and a bookable option to join drinks masterclasses in the Tasting Tent, where festival-goers will be able to sample some of their favourite tipples.

“We really wanted to introduce the Foodie Fest with a bang and it’s a real honour for us to have the amazing Diddly Squat Farm Shop as our centrepiece,” admitted Nick Wigley, CEO of The Classic promoter Goose Live Events. “Quite apart from Jeremy’s reputation as a champion among petrolheads, his wonderfully entertaining and insightful new Clarkson’s Farm show has made him a champion among the farming fraternity, too. So we couldn’t have dreamt anything better than having the Diddly Squat Farm Pop-Up Shop on pole position in our new Foodie Fest at the Classic.”

Providing exceptionally good value, all tickets for The Classic include access to the live music concerts, as well as both racing paddocks, open trackside grandstand seating, the world exclusive showcase of Lewis Hamilton’s seven title winning F1 cars, with a display of historic F1 icons already confirmed as well. the Foodie Fest plus the vast majority of the the fabulous family entertainment and attractions on offer – all being enhanced for the Bank Holiday in 2022.