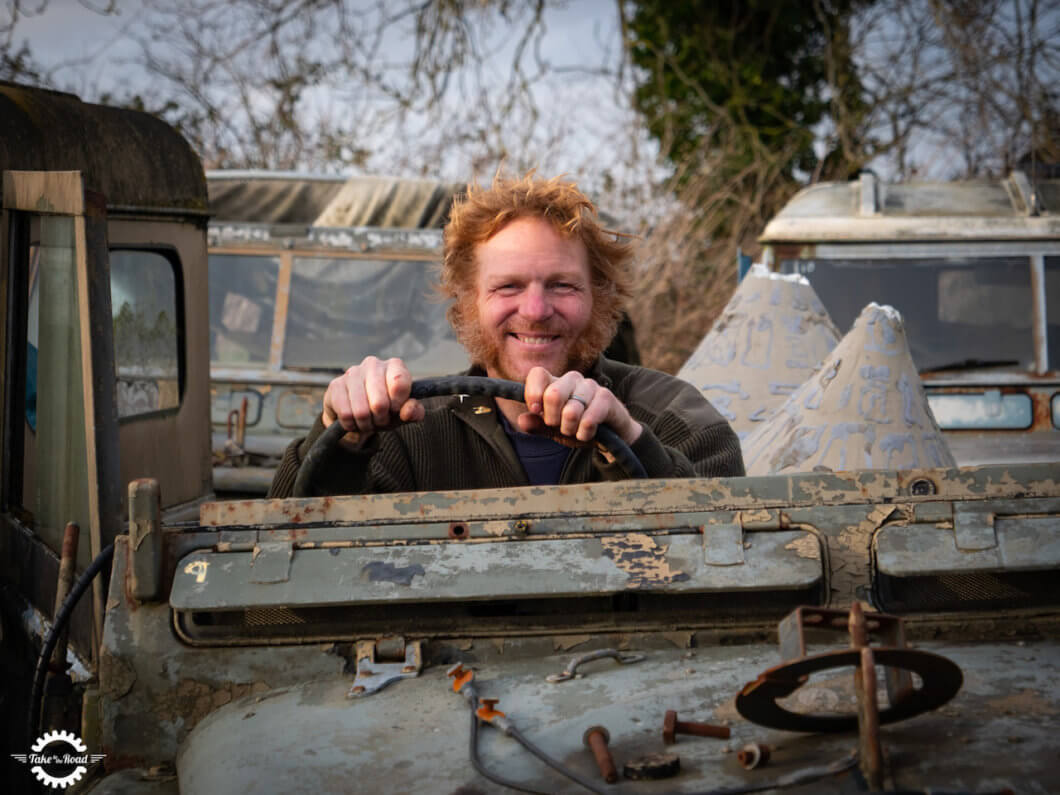 Take to the Road first interviewed the stars of Flipping Bangers back in April 2019 when the show released its second series. Since it first aired in 2018, the Blaze channel show has garnered a loyal following of car fans, who have followed Will and Gus’s dream of saving rusted and neglected old bangers. Whilst trying to earn a few quid along the way! Over the weekend I popped in to catch up with one half of the Flipping Bangers team, Will Trickett. As a life long petrolhead, Will loves to tinker away on his own projects and he has built up a little collection to keep himself busy when he’s not in front of the TV cameras.

With 2 series of Flipping Bangers under your belt, have you had a chance to sit back with a nice mug of tea and take stock of all the cars you and Gus have worked on?

It’s always nice to think back through the cars we’ve done as some have been more appealing to me than others. And some I haven’t really taken too very much. What I really like though about messing around with old second hand cars is it gives me and Gus the opportunity to actually go and own that car that you’ve always wondered about. Because some cars that I’ve always thought I might like to own, now I don’t and wouldn’t want one again. And vice versa.

So that’s 23 cars in total that have been blessed with both yours and Gus’s restorative skills. That’s more car than one person would own in their life time.

Yes I suppose that is more than the average person would own in a life time. We’re in the market of buying and selling these things so we’ve got to work our way through them. And hopefully in a few years time it will be 46 cars or 102 cars. Or 920! You’ll have to see ha ha!! But we’re not just trying to appeal to one person. We generally try and get a car, get it road worthy again and sell it. And we are making a TV show as well and we’d like to think that there are people out there who would love to see their favourite car being dragged out of a ditch, brought back to life and being able to be driven safely on the road again.

When did you first start tinkering on cars?

I first started tinkering on cars at the age of 6! Or probably less actually! And I can tell you the first ever job I did on a car, was with our lodger, Henry’s car. It was a Fiat 126. A yellow one. He had blown the head gasket on it and its actually quite easy to fix. He trashed the poor Fiat all over the place like he was Nigel Mansel. So he blew the engine on a regular basis! So my first job was replacing the head gasket on that car and while doing it we realised that not only had the gasket gone, but he had blown a hole between the pots and on the head as well! So we had to go to Radstock Breakers Yard to get a head off another Fiat 126. First job ever!

The classic car market has gone mad over the past 10 plus years with prices shooting up for pretty much any half decent classic. Do you think this has had an affect on the old banger car market?

Working on old unloved bangers is a fast and sure path to grief and torture. Both mentally and financially! So why do we love it so much?

Well I just like working with old cars and I like the challenge and I know it sounds a little bit cliched but its true and if you can drag these things back from the brink of death, or even death itself, I see that as a great sense of achievement. These things are always a little bit difficult at times and rust is always the biggest problem. Finding parts is always another big problem. But the enthusiasm with doing the car is not a problem. You know its that sort of the ridiculous love for what could potentially be an unloved or forgotten thing.

Fans really enjoy your show as it takes things back to basics, fixing up a car with your mate and trying to make a few quid along the way.

You know if you are fixing up an old car with your mates, why are you doing it? Its not that you desperately want to get the car going. Its because you enjoy what you are doing and if you can do it with a friend, that makes it even more fun! There’s a certain amount of comradery there. And you know as old car geeks, there are a lot of us about! But we are not tightly packed together so when you do find somebody of a kindred spirit, its nice to be able to share these experiences of sharing your hobby together.

It is also refreshing that you and Gus are upfront about the problems with some of the cars, like the Beetle. That one bit your hand clean off and you had to sell it without an MOT. Its refreshing that there was no fakery going on, like on some shows.

Yeah! Well that’s why we try and be as honest as we can, in a nut shell. Because that is life. You know, I’ve done it myself! On more than one occasion! I’ve accidentally bought some real sheds in the past. Sometimes its passion that has driven me to do it, sometimes I’m just in a hurry and I’m not paying attention. Sometimes I just miss something. It happens. And it can be the real gotcha! You know taking things for a test drive, you know that extra 10 miles can be enough to tell you if that rare really difficult to fix gearbox is any good or not. And its not until you’ve done those extra 10 miles on the way home that you’ve dropped a real clanger! And its clanging around inside the gearbox doing untold damage to something that you are really going to struggle to source. None of us are infallible!

You are a big Land Rover lover. Do you think we’ll see a banger Landy on a future series of Flipping Bangers?

Because of my love of Land Rovers I certainly hope that we will be able to work a Landy into Flipping Bangers. But what I can say is that Land Rovers are actually very difficult to make any money out of! Because they generally cost more to do than you can earn back. Land Rovers are generally best left for people to have as their own project. And get the fun out of it that way.

Does Gus make a good cup of tea?

Does Gus make a good cup of tea… Well I’m very particular about how I have my tea made! So I generally try and make it myself. I think like with anything, people can always put more care and attention into their tea, or abide by the few simple rules that I insist on! Such as with my coffee, the milk must go in first!

Whats the worst car you’ve ever bought personally to fix up?

Well yeah the car that I liked the most and was the worst buy ever was a Morris Minor 1100 pickup. Awesome car! It got me everywhere. But the day before I drove it down to see my then girlfriend in Padstow in Cornwall, the chassis snapped in half! And the only thing keeping the front connected to the back was the handbrake cables! Every time you revved up it would bend the chassis up and slacked the cables. And every time you let the revs off, the chassis would bend back the other way and jam the brakes on… so it was a proper hiccup to get it home. It was scary really! And I had to spend all night welding the chassis up so I could go and see my girlfriend who I hadn’t actually seen for 18 months. So I was desperate to get down there! But I loved that car dearly and I then went on to restore it and customise it. Now this was around 27 years ago and it is actually still in existence as a custom car! And its even been used as a dragster of all things. So a nice end to the story with that one.

Will Trickett was talking to Niall Julian