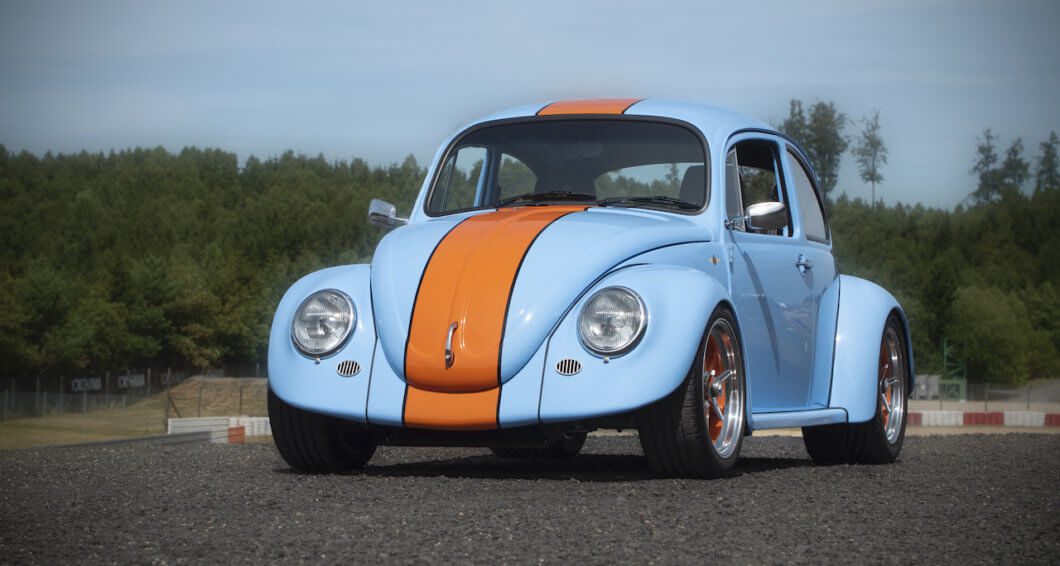 In 2017 Take to the Road spoke to South African engineer Jean Fourie about an exciting re-imaging of the classic VW Beetle. Dubbed the V8stealthbeetle, Jean’s vision was to create the ultimate Sleeper Beetle with completely modern underpinnings. Jean’s project began in 2015 and after years of detailed development on the prototype, the V8stealthbeetle project is now officially on the road and the team building cars for some very lucky customers. We catch up with Jean and Doug Foulkes to find out more about the ultimate V8 Beetle build.

The V8stealthbeetle has finally hit the road after a fascinating development phase that started in 2015. How does it feel for the team to have reached that milestone?

Jean – It’s a great achievement, and I think we have done well in managing to fit a V8, not just like the rest of the world, but rather mid-mounting it, and doing it proper. Its easy to do something once, but its a lot more complicated when wanting to do it as a production, and definitely very tricky, if you want to satisfy clientele from all over the world.

Doug – When the initial idea of a one off toy for Jean shifted to a production vehicle, everything changed. That’s why the time frame went from 6 months to 3 years… But it is a fantastic achievement! People won’t realise how much thought, development and just hard work is involved in producing a production car by your self.

Did the philosophy of the project change at all over the build of the first car?

Jean – I think yes. We moved the goalposts and introducing the aluminium chassis was a large ‘step up”.

Doug – Yes the aluminum chassis was a game changer, it took the V8stealthbeetle from being another big engine in a Beetle, to a mid-engine sportscar with a Beetle body.

What was the most challenging aspect of the Stealth Beetle project?

Jean – Suppliers, supplier, suppliers! We struggle to find the right quality components here on the tip of Africa. We are ready to build the cars, we are able to manufacture just about anything, but the supply chain is weak, and this causes us much headache.

Doug – Unfortunately it also means price wise we are at the hands of suppliers, many of them overseas.

The V8stealthbeetle has garnered a lot of interest on the web and rightly so. How has the final build and concept gone done with fans?

Jean – Judging from comments on Facebook and YouTube, everyone LOVES it. I caution that Facebook and all the likes etc, can build a false sense of perfection. But the comments have definitely been very positive.

Doug – We have a great fan base, they love what Jean has done. We have still one BIG thing to film and that is the Beetle going full tilt around a track… It will happen and we ask fans to remain patient. It’s all about getting the timing right.

Customers can now order their own V8stealthbeetle kits so they can build their own, which is a brilliant idea. How extensive is the Stealth Beetle kit?

Jean – I think the kit is TOO extensive. Every nut and bolt is supplied with the kit and the few variables, like steering wheel, rims, upholstery, is left to the builder to source. Although we can supply those as well if needed.

Doug – As well as being comprehensive it’s also a straightforward assemble job. No hunting around scrap yards for bits and pieces. We also supply videos on how to cut and prepare your donor body and how to assemble the components onto the chassis. It’s basically Meccano for big boys and girls!

Have you cooked up any special upgrades/development mods for future and current builds?

Jean – We are permanently looking at ways to make it even better, so upgrades will always be around. So watch this space!

Doug – Once one car is built then the development really starts. Our latest car for example has a bolt off rear ¼ panel to help get to work on the engine and gearbox.

With Jean’s background in racing will there be a special V8stealthbeetle Race Car?

Jean – Good question. If there were more than 24 hours in a day, the answer is yes. But right now, we are concentrating on the road car only.

Jean Fourie and Doug Folkes were talking to Niall Julian