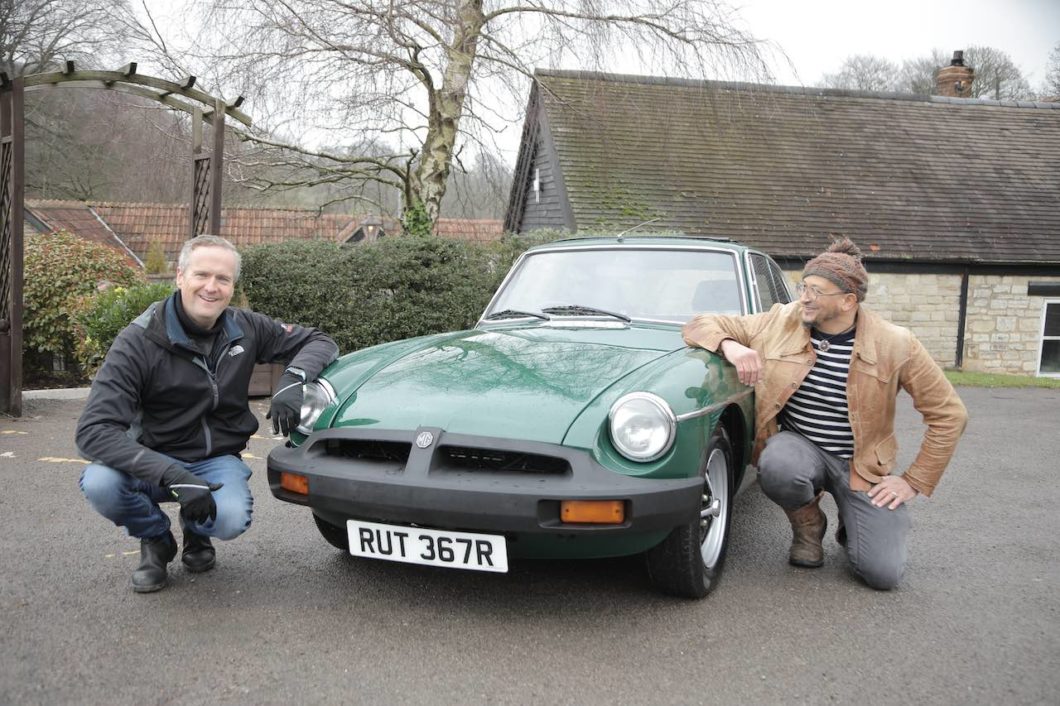 Take to the Road recently interview the dynamic petrolhead duo of Tim Shaw and Fuzz Townshend for their landmark 10th series of Car SOS, which is currently airing on National Geographic. And tonight (12th May) on National Geographic Tim and Fuzz will be celebrating another incredible milestone… the 100th car makeover, which just also happens to be their first electric car!

The 100th makeover features a truly moving story and Car S.O.S presenters Tim and Fuzz take on a huge challenge of creating a ‘legacy car’. The car in question is a 1978 MGB GT, specifically converted to electric, so that it can live on in the family for years to come, in the memory of a cherished dad and grandad who sadly passed away before the episode could air.

Former postman Jeff, bought his dream classic car, a 1978 MGB GT, with plans to refurbish it and for it to be the perfect retirement project. However ill health sadly took over his life and Jeff tragically passed away earlier this year.

Normally that would be the end of the story, but there was more the MGB GT’s story. Caroline, Jeffs’ daughter promised him on his death bed that the family would complete the MG and take his two grandsons Oscar (7) and Ollie (8) out for a drive in it one day, so that they too would get the bug and inherit their Grandad’s love of old cars.

Caroline and her two sisters did not have the money or the skills to even begin to work on the car. So Caroline wrote to the Car SOS team for a second time, to see if they could complete the car in her loving dad’s memory.

Sadly, as this was a self-nomination, the Car S.O.S team had to say they could “not” take the car on. But what Caroline didn’t know was that the decision was in fact a bluff and the Car S.O.S team were actually working with her mum Sue, who had given them permission to work on the car.

The story of the Jeff’s MGB GT’s restoration is an emotional one for Caroline and her family, with his pride and joy, his dream car now rescued, fully restored and the family legacy saved for its future generations to enjoy.

It really is incredible to think that Tim and Fuzz and the Car SOS team have restored 100 cars since the show first started. It truly is a remarkable achievement for the TV show that changes peoples lives. Make sure to tune in to the landmark 100th car makeover on National Geographic tonight at 8pm.