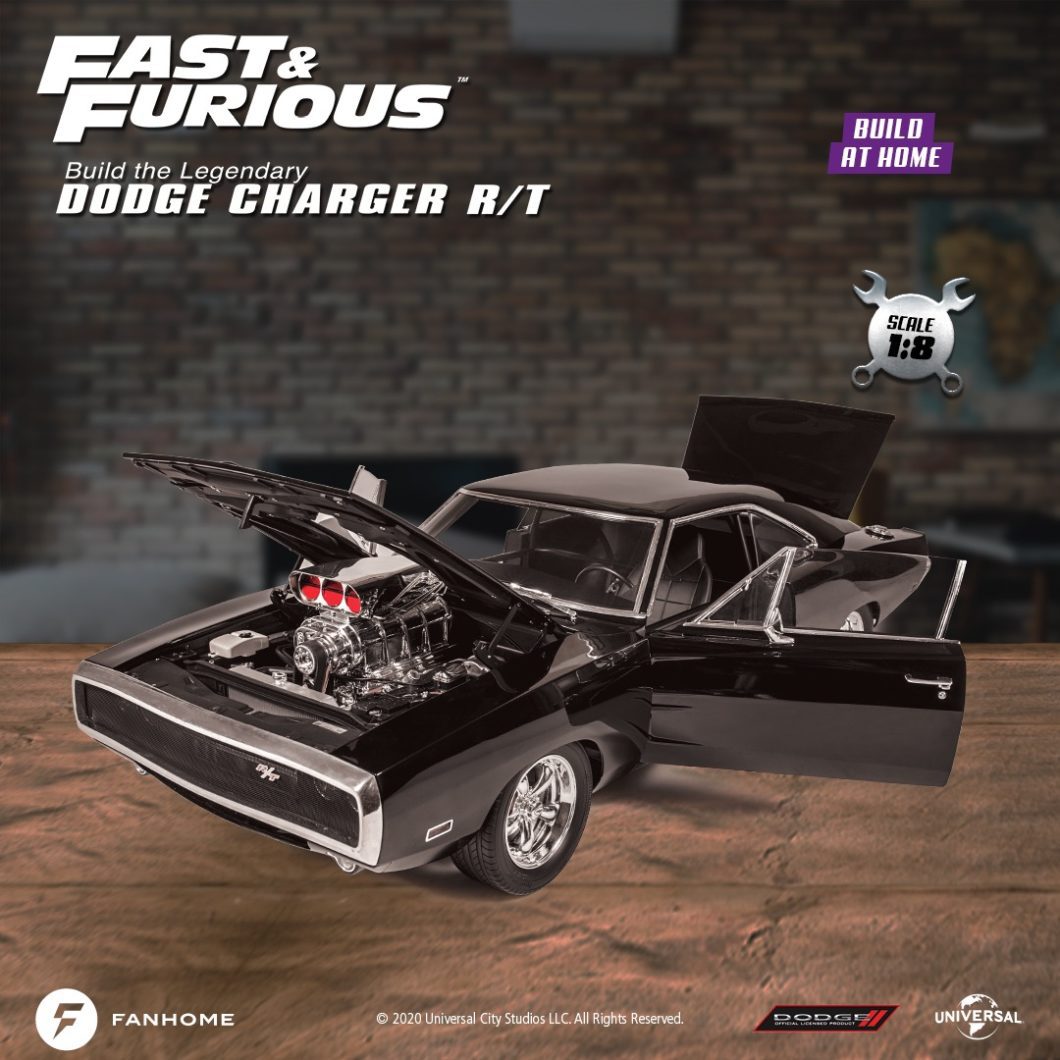 One of the greatest movie cars of all time is the legendary Dodge Charger R/T from the hit movie The Fast and the Furious. It is hard to believe it debuted twenty years ago in 2001 and it changed the movie industry forever. To mark the occasion Fanhome have released a fantastic 1:8 scale model of Doms Dodge Charger R/T. In this special review, Take to the Road checks out the first four issues of the new magazine and starts to build the iconic V8 muscle car, which has been provided by Fanhome.

There are certain experiences at the movie theater that you never forget and for me The Fast and the Furious is up there with the all time greats. Petrolheads around the world had been waiting for a movie like this to be released and when it hit the big screen, little did we know it would spawn one of the biggest franchises of all time. I can still remember the atmosphere outside the cinema after watching the film for the first time… it was an awesome adrenaline rush! Eight movies later, the Fast & Furious franchise is still going strong with a ninth installment due later this year.

The stand out car in the first movie was of course the legendary Dodge Charger R/T, the muscle car monster that Dominic Toretto said he was afraid to drive. It stared in one of the most celebrated chase sequences of all time and its crash after jumping the rail tracks broke the hearts of countless car fans around the world. And ow you can build your own amazingly detailed scale model of the mighty Charger R/T, which has been faithfully recreated by Fanhome. This is the first in a new series of fan aimed products being released by Fanhome, with other models from the Star Wars and Marvel franchises in the works to look forward too as well.

Before jumping into the build, Fanhome have some awesome Fast & Furious goodies for early bird subscribers! These are a very cool Fast & Furious cap and T-shirt, which are perfect for fans of the movie franchise. This offer is open until 4th May 2021. To take advantage of the offer head to the link below and use the promo code:

To get things started Fanhome sent me the first 4 issues of the subscription magazine, which was enough to get me excited about the build. Along with the specially packaged parts, each magazine includes a detailed step by step guide of how to assemble the muscle car. Also included in the magazines are detailed facts about the movies themselves and the world of hot rods and modified cars.

One of the most impressive and downright intimating feature of the movie car was the massive blown supercharger. Kicking off with Issue 1, you get to assemble the bonnet (or the hood as our American friends like to call) and the supercharger itself.

The assembly kit is nicely laid out and it even includes a screwdriver to get you started, which is a nice touch. Working through the guide in the magazine, the instructions are clearly laid out with all the steps easy to follow.

What stood out straight away was the weight of the bonnet which was surprisingly heavy despite is size. The weight felt good and showed that this 1:8 scale model was going to be well designed and thought out.

The first step was to prepare the work area with some soft towels to protect the parts, which were then laid out to begin assembly. First up was the bonnet and support frame which was easy to screw together.

This was then followed by the supercharger unit itself. This contained some small parts that took a little time to fit, in particular the butterfly flaps. It just took time and a little care to get the small parts clipped into place.

After taking my time with all the parts, the assembly stage of Issue 1 was very satisfying. The bonnet and supercharger looked and felt good to work with and the parts gave a taste of what was to come.

Issue 2 moved the parts building to the scale recreation of the steering wheel that Dom wrestled with in the movie. It also included the front left wheel parts, both the tyre and allow wheel. Once again the feel of the parts were impressive with the weight of the tyre surprising once again.

For the final issue in this review, the assembly stage moved to the front left suspension, which tied in with some of the parts from Issue 2. The level or detail was raised once again, but so was the need to concentrate even further on the build sequence. As you’d expect for a scale model of this size, the suspension parts are quite small so you need to take a little extra time and care to make sure everything is fitted together correctly.

With all 4 issues completed, I have to say I was really impressed with both the quality and the level of detail of this scale model. I didn’t run into any major issues with the parts, apart from a few minor little plastic pieces that needed a little filing around some holes, which is to be expected when building a kit. I also took my time and did not rush any of the assembly stages, making sure I didn’t skip any of the steps in the guides. It was actually quite satisfying to take some time out and build something cool for a change.

So would I recommend subscribing to the Fast 7 Furious Build the Legendary Dodge Charger R/T? Yes I certainly would! As a huge fan of the first movie and the sequels, The Fast and the Furious franchise is special and the one car that has always stood out from all the others, was Dom’s might Dodge Charger R/T. Building the 1:8 scale model will make a very worthy addition to the collection.

Many thanks to Fanhome for supplying Issues 1-4