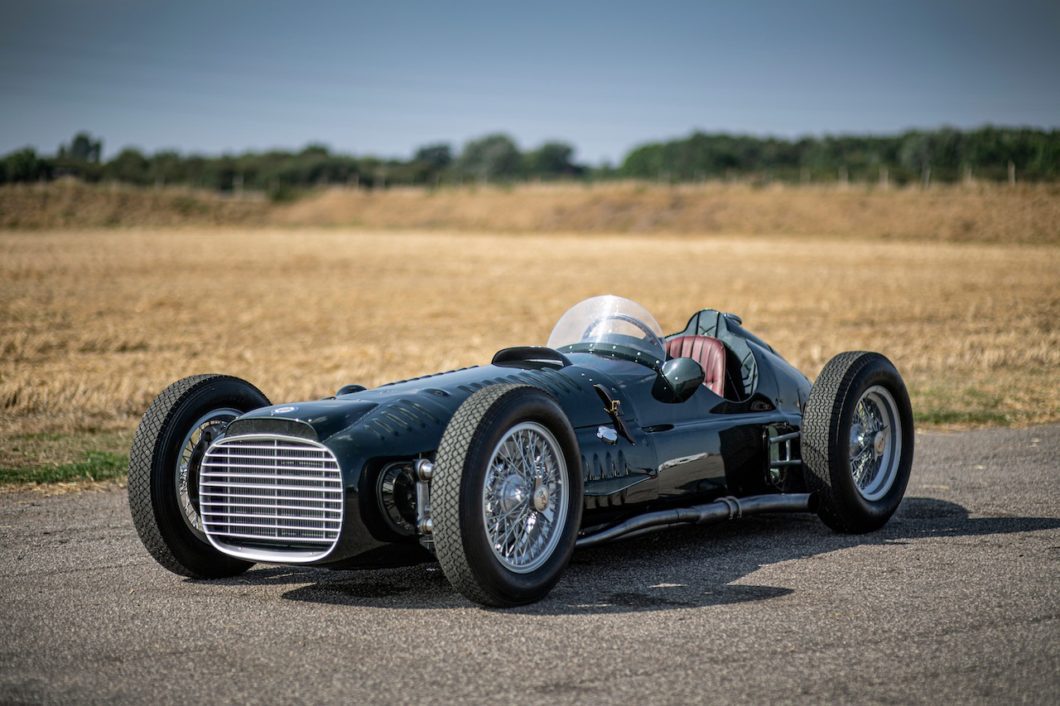 BRM has announced that the first new P15 V16 race car, built to mark 70th anniversary of the famous British Racing Motors team, will make its triumphant and highly anticipated debut at the Goodwood Revival this weekend.

The new race car will join more than 35 BRM racing cars spanning 1949 to 1974, which will attend the Revival weekend in celebration of the marque’s 70th anniversary.

The first of three ‘new’ 16-cylinder P15 V16 BRM racing cars, went through shaken down testing at Blyton Park racetrack, Lincolnshire, last week in the presence of its new owner, John Owen. The shake-down marked the realization of a boyhood dream for Owen, the son of then BRM Formula 1 team principal Sir Alfred Owen, who vowed one day to bring the iconic sound of the 1.5-litre supercharged V16 back to Britain’s racetracks and to see them race again in front of packed grandstands.

Not since 1953 has a new BRM P15 been built from scratch, but using the original post-war blueprints, specialist engineers from Hall and Hall have, over the past two years have painstakingly recreated the entire vehicle. It comprises more than 36,000 individually engineered parts – with a degree of authenticity and excellence rarely, if ever, seen in the world of historic motor racing.  The engine alone has more than 4,000 components, many of which had to be individually manufactured by the Hall and Hall team.

“Hearing that V16 engine again after so many years, was an incredible moment, and a dream come true,” said John Owen. “It’s a tribute to the tremendous skill, persistence and attention to detail of the engineering team at Hall and Hall, and I really can’t wait to unveil the car at the Goodwood Revival.”

The car was shaken down by Rob Hall, son of Rick Hall and partner in Hall and Hall. “The car is fundamentally superb,” he said. “Of course, it still needs a few tweaks and adjustments, but this is to be expected in such a complex package. We took the engine up to 9,000rpm but got a ticking off from the circuit because I think we exceeded their 95dB noise limit!”

John Owen, now 82, was just 10 years old when he first heard the unique wail of the V16 engine, which developed 600 horsepower thanks to its ability to spin at an incredible 12,000rpm – far beyond the range of many road and race cars 60 years later.

Thanks to the unique partnership with historic automotive restoration specialists, Hall and Hall, the first of the three ‘new’ P15 V16 MK1 machines has been delivered on schedule, despite the headwinds presented by Brexit and the Covid 19 pandemic.

“This has been an incredible journey for all of us at Hall and Hall”, said Rick Hall. “We have worked closely with BRM ever since I joined the team at the end of ’72, and we needed every bit of that experience to bring this truly awesome racing car to life.  It took two years, from original blueprint right up to shakedown, but there are no shortcuts when you’re working to the level of quality, detail and authenticity we needed.

“With the first of the three new Mk1 V16 now complete, we will turn our attention to the two remaining chassis numbers,” he added. “With all the technical hurdles now safely overcome, we are supremely confident we can create a truly magnificent, brand new, historically authentic yet entirely raceable 1950s Formula 1 car”.

The Goodwood Revival will be attended by the key BRM team members – John Owen, son of industrialist Sir Alfred Owen, and his three grandsons, Nick, Paul and Simon. Additionally, Rick Hall and his son Rob, the partners of Hall and Hall, will be present to witness the largest collection of BRM racing cars ever assembled.  Included in that number will be five V16 BRMs (three Mk1 and two Mk2 models), the first time so many V16s will have attended a single race weekend.  The ‘new’ BRM P15 V15 will be unveiled by John Owen on Friday September 17.