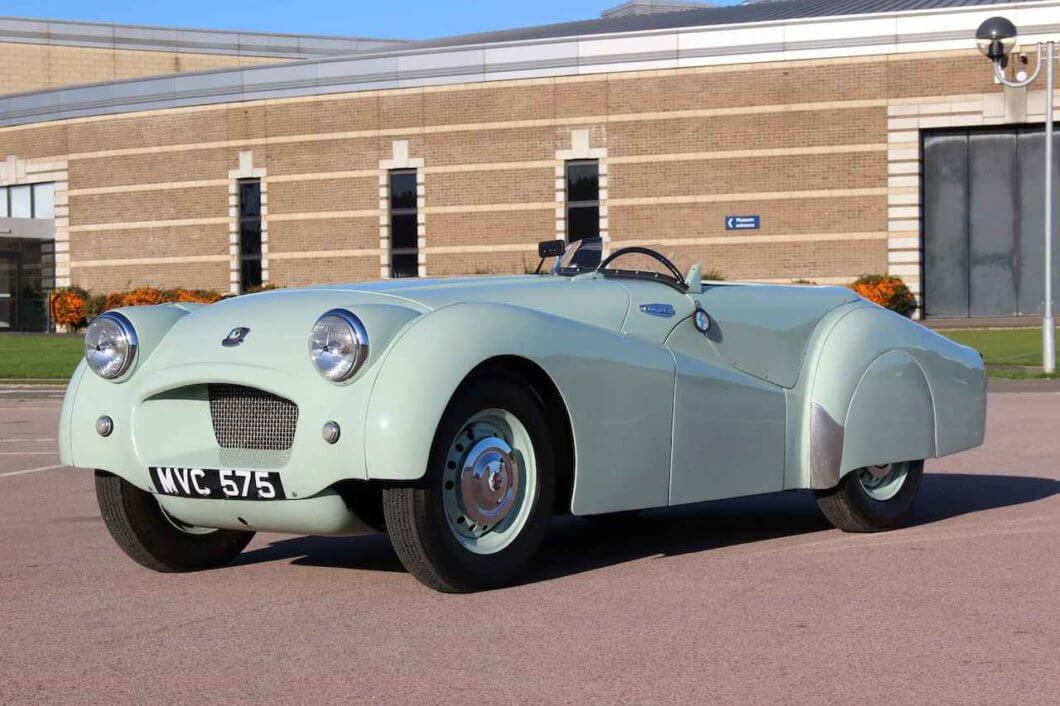 A unique, record-breaking Triumph TR2 prototype sports car has been acquired by the British Motor Museum with £250,000 from the National Heritage Memorial Fund (NHMF).

One of just three prototypes of the extremely successful 1953 Triumph TR2 model produced by the Standard Motor Company (SMC), it is the only one known to survive. In May 1953, during speed trials at Jabbeke in Belgium, this car reached a speed of almost 125 miles per hour, setting a record for a two-litre road car at that time. The invaluable publicity from the achievement led to the renaissance of the Triumph marque and the start of the long and successful line of TR sports cars.

After testing was completed in the mid-1950s, the car was sold to a private owner. When sold on again in the 1970s, it was dismantled and boxed up. The owner intended to restore it, but this project was never realised. In 2015, the vehicle was purchased in its boxed state and the new owner spent almost two years restoring the TR2 to its former glory and making it fully driveable again. Fortunately, almost the entire car – bodywork, engine, and trim – had survived, allowing the vehicle to be rebuilt to its original specification.

The sports car has now been secured for the nation for a total of £280,000 and, as an important piece of the UK’s motor history, it will be displayed at the British Motor Museum in Gaydon where visitors can enjoy and learn more about it. Occasionally, there will even be a chance to see the Triumph in motion.

René Olivieri, Interim Chair of The National Heritage Memorial Fund, said: “This is a truly triumphant day. A beacon of the UK’s pioneering motoring industry in its heyday, this Triumph TR2 prototype is a very important piece of our industrial and social heritage. At the National Heritage Memorial Fund we felt it was imperative to save it for the nation, for future generations to enjoy.”

Nigel Huddleston Heritage Minister said: “The Triumph TR2 prototype is an important part of our national automotive history. This classic car reached a speed of almost 125 miles per hour, setting a record in 1953 and went on to influence a line of successful TR sport cars. I’m delighted that, thanks to the National Heritage Memorial Fund, this unique sports car will now go on display to the public at the British Motor Museum in Warwickshire.”

The Triumph and the British motorcar industry

Once the second-largest producer of motor cars in the world, the Second World War all but shut down UK’s motor manufacture in favour of military vehicles. The government’s post-war economic strategy was to restart the industry, but it dictated that motor manufacturers concentrated their efforts on selling to overseas markets to bring in much-needed income.

For decades after the war, motor manufacture was the UK’s most visible export. It excelled in the production of sports cars: Jaguar, Aston Martin, Morgan, and Austin Healey, to name but a few. SMC was trying to launch the TR2 into an intensely competitive market. Even today, the market for classic sports cars is still dominated by British cars.

The rise of Triumph began in the early 1950s. As a sports car in a saturated market, each marque sought a unique selling point. Apart from aesthetics, the principal attraction of a sports car was speed. Breaking land-speed records was, therefore, a popular marketing strategy and one that the TR2 took full advantage of.

The handmade prototype of the Triumph TR2 differs widely from the extremely popular final configuration that was to follow in mass production. Built around a wooden frame, the bodywork is riveted together rather than welded. The aero windscreen and streamlined canopy were purely designed for its record-breaking. Even the Triumph badge on the bonnet is unique to this exemplar.

Stephen Laing, Head of Collections at British Motor Industry Heritage Trust, said: “The Jabbeke TR2 record car is a perfect example of the lengths that motor manufacturers were going to, in order to restore their markets and promote their products in the post war years. It was also the first in a long line of modern models for a revived Triumph brand, now one of the most popular sports car names around the world. We are delighted that the NHMF has generously enabled the British Motor Museum to purchase a car that complements its collection and the story of the motor industry so well.”